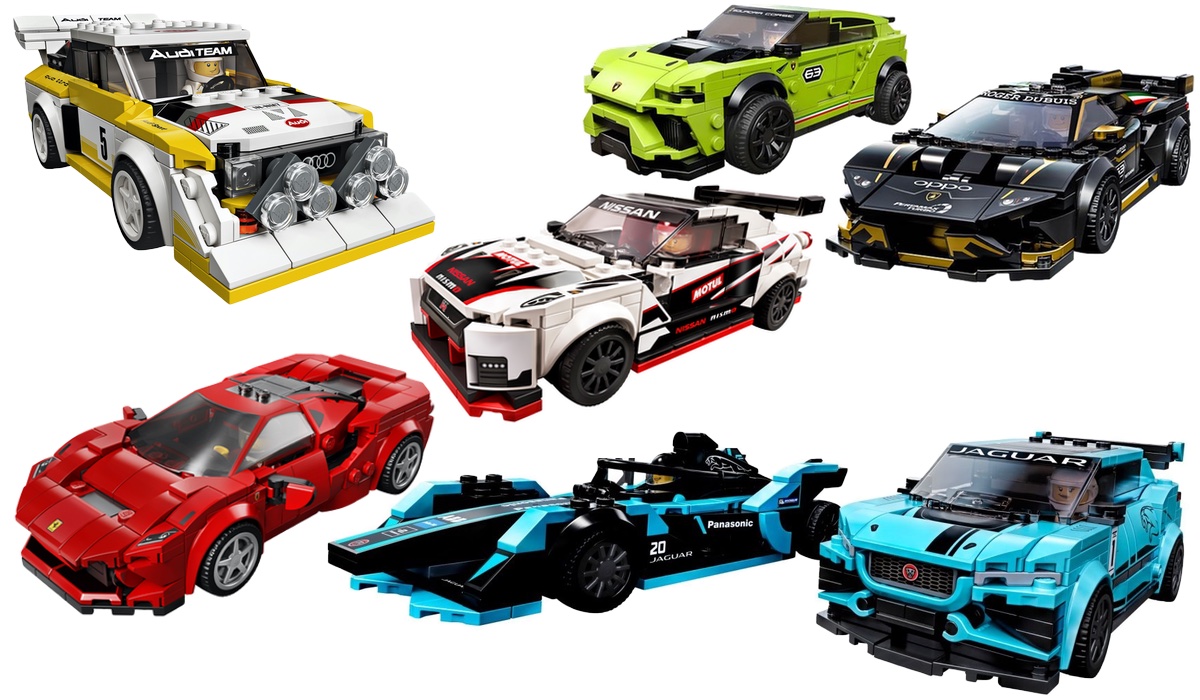 With yesterday's release of most of the 2020 Technic sets, including the Top Gear Rally Car it's only logical we'd start to see information coming out for the 2020 Speed Champions sets due for release on January 1. Thanks to LEGO's presence at the LA Autoshow where they're running a hand-on build booth with the 1:1 Bugatti Chiron, we're seeing some additional announcements from the show. We'd already seen the Jaguar Racing I-PACE/ePace and Lamborghini Huracan Super Trofeo/Urus ST-X double packs but what was missing was the three single car sets we're expecting. We're seeing a continuation of the 8-wide theme across the line, with LEGO pointing out these sets are 25% bigger than ever before.

We'd been surprised as the forum rumours of 2020 Speed Champions sets had come to life with Jaguar and Lamborghini but at this point it's no surprise to see the rumoured "Ferrari Road Car" be Ferrari's new volume model to replace the 458/488 - the F8 Tributo. This is our first look at a Ferrari in 8-wide and we're definitely seeing a lot of texture on the srufaces of the model - there's barely a flat panel anywhere on it! There's minimal use of stickering (the headlights are vaguely reminiscent of the LaFerrari set) and we're seeing wing mirrors on the side of the model for the first time. 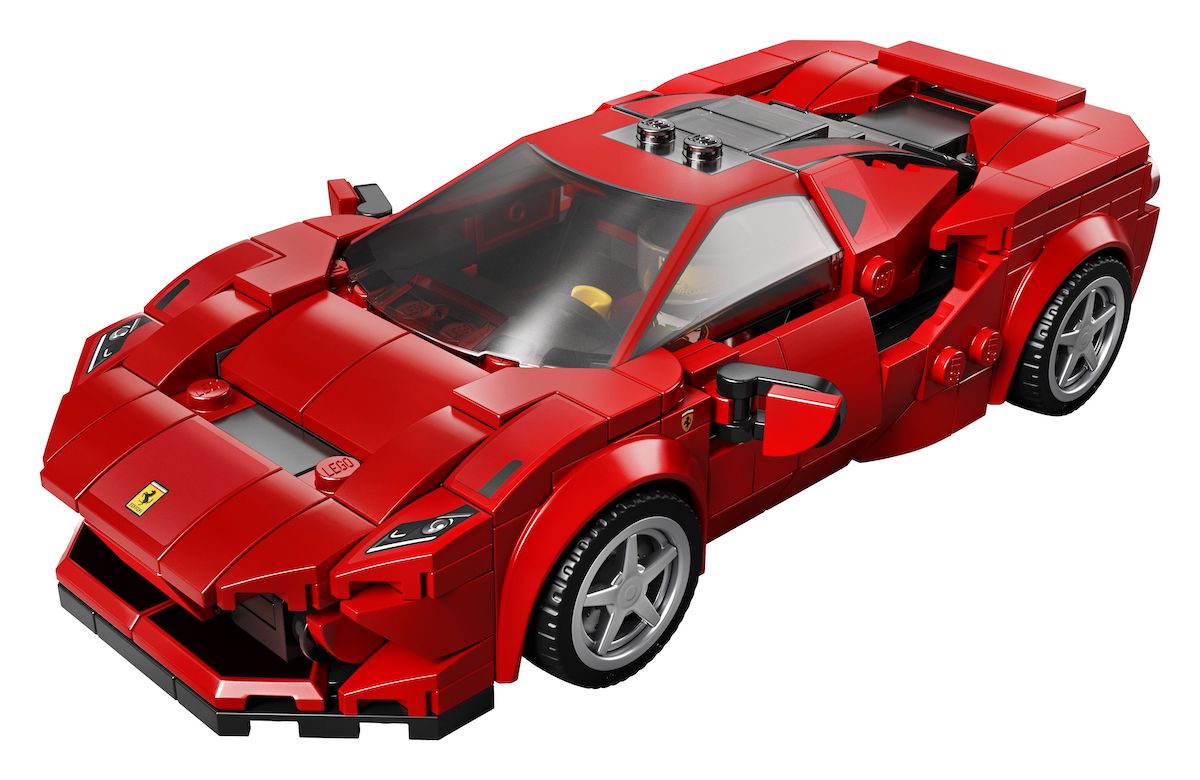 One of the most striking details on the F8, especially compared to the Lamborghini Huracan model is the built out transparent engine cover on the back of the model. LEGO have gone for the traditional Ferrari red marketing colour for this model which looks great as always. Sure to frustrate MOC creators and people keen to retrofit their 6 wide speed champions, the new wider windscreen appears to have the pillars pre-printed onto it to create the look of the car (that detail being a sticker wrapping around the windscreen would be difficult to apply!) The windscreen lifts off to allow access to the interior of the car. We haven't seen confirmation but given this new 8 wide style, it's possible two minifigures will fit side by side in the cabin.

The side profile of the Speed Champions Ferrari F8 Tributo emphasises how low and angular LEGO have made this model. There's virtually no height to the model over the front wheel arch.

This set is rumoured to have around 275 pieces and retail at US$ 19.99, which makes a lot of sense when you see how many small pieces have been used to create the angles and shape of the model. This new model in particular of the new 8 wide sets seems to carry the detail trend from last year's McLaren Senna. These new Speed Champions models follow the tend of the '74 Turbo 3.0 from last year in having only a few studs visible on each side to give the model a LEGO set look whilst getting the overall shape of this model as close as possible to the real life vehicle. 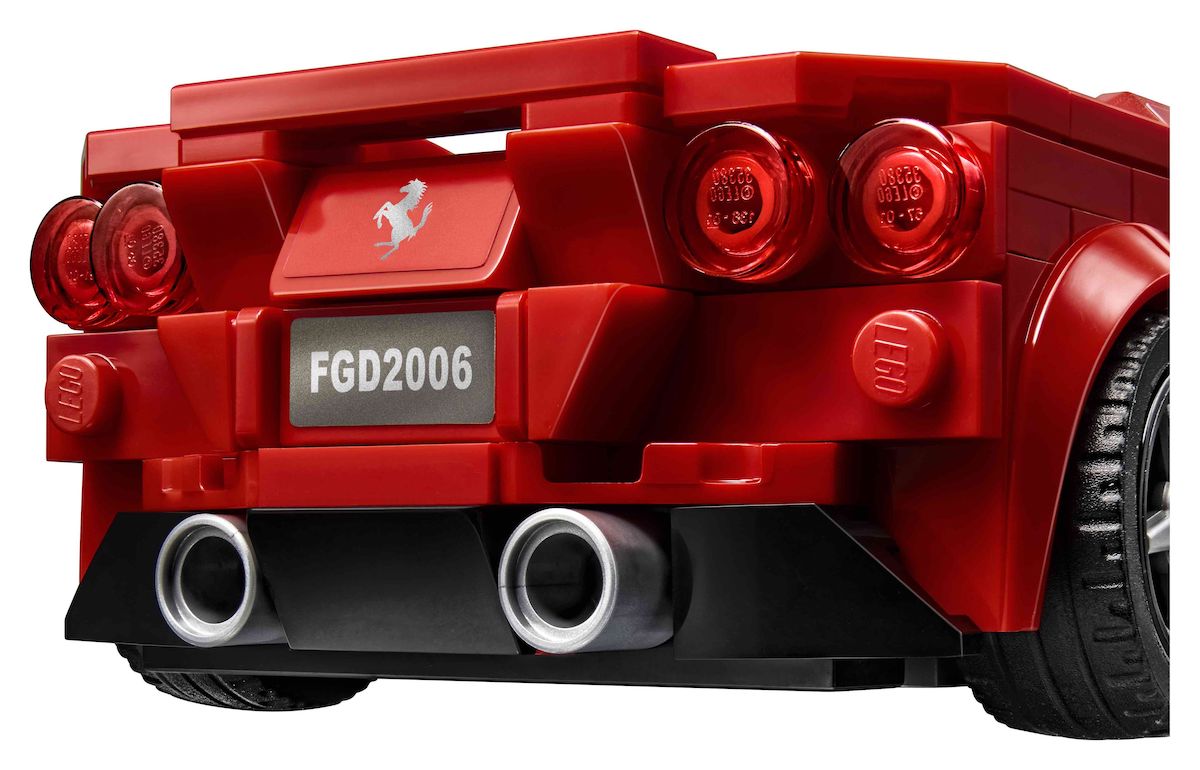 The rear of the Speed Champions Ferrari F8 Tributo, with the iconic 4 rear lights - Ferrari badge and licence plate stickers and two beefy tailpipes. The new diffuser style, using the sloped, rounded corners sideways on the bottom of the model looks great.

The box art for this single car set shows off the rear window/engine cover detail which is almost identical to that of this year's Ferrari F40 Competizione set. The set is pictured only on these five spoke wheel trims so we'll have to wait until January to see if there's another option in the box. 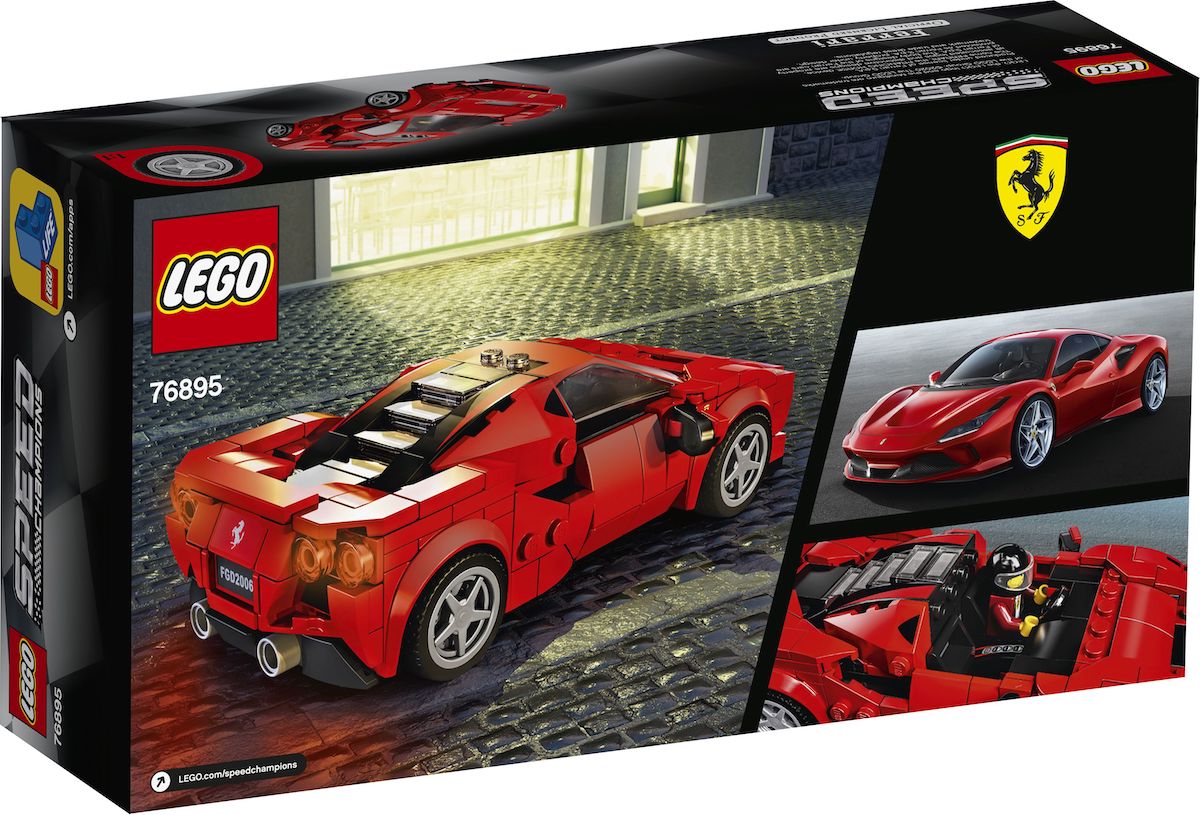 The rear of the box for set 76895 - the LEGO Speed Champions Ferrari F8 Tributo. The bottom right image shows the cabin of the vehicle, with the windscreen detached. Looks like LEGO went with a traditional italian street scene for this box art. 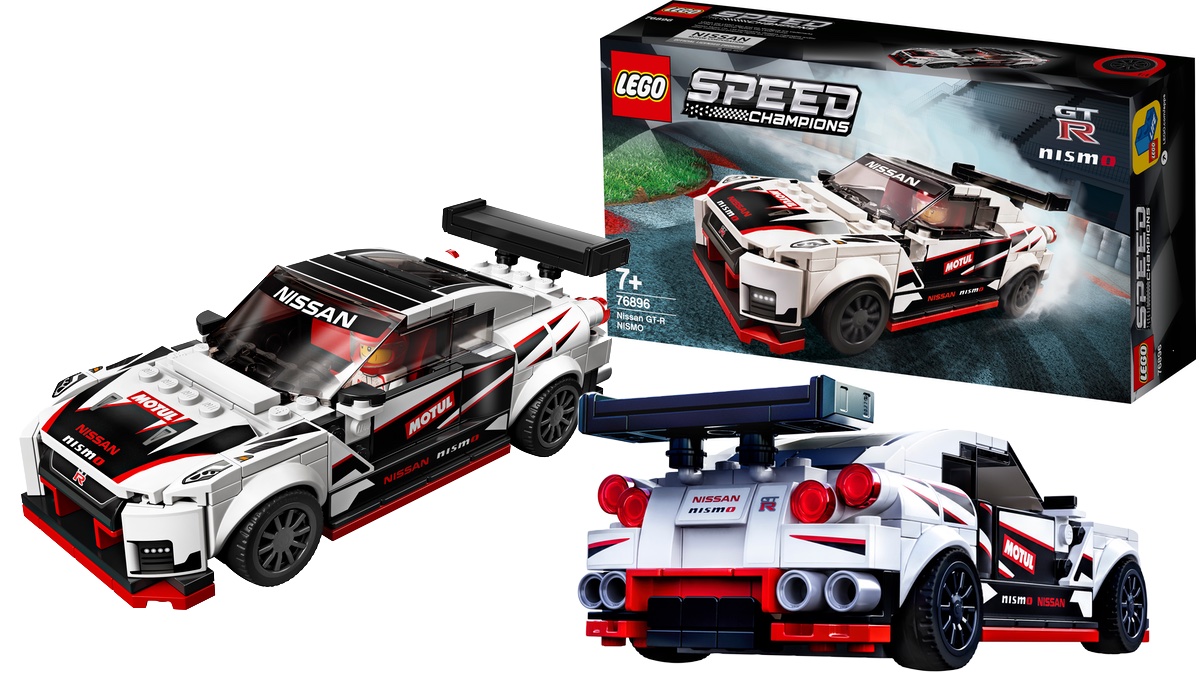 The last model to be revealed, in a live webcast with Nissan Japan this is our first entry into the Speed Champions line up from a Japanese car company. The Nissan NISMO GT-R is based on an R35 Nissan Skyline and is Nissan's most prestigious motorsport model. The LEGO set is released in a motorsport livery (even though the set itself premiered against a road car). This set has been released in Nissan's signature motorsport colours, with a primarily white body, black details and red highlights.

The Speed Champions line hasn't been afraid to put out models of historic cars - the latest release this year, of the 1974 Porsche 911 Turbo 3.0, should leave us in no doubt about that. Audi has been absent from Speed Champions for a few years now, having had the R8 LMS and R18 e-tron endurance racer sets - we haven't seen a Speed Champions model of a road car Audi so far. Now for 2020 we're seeing this Group B rally monster come roaring back from Audi Sport's history. This model makes good use of the 8 wide format, with two optional banks of spotlights for the front of the model for that 'night stage' look. 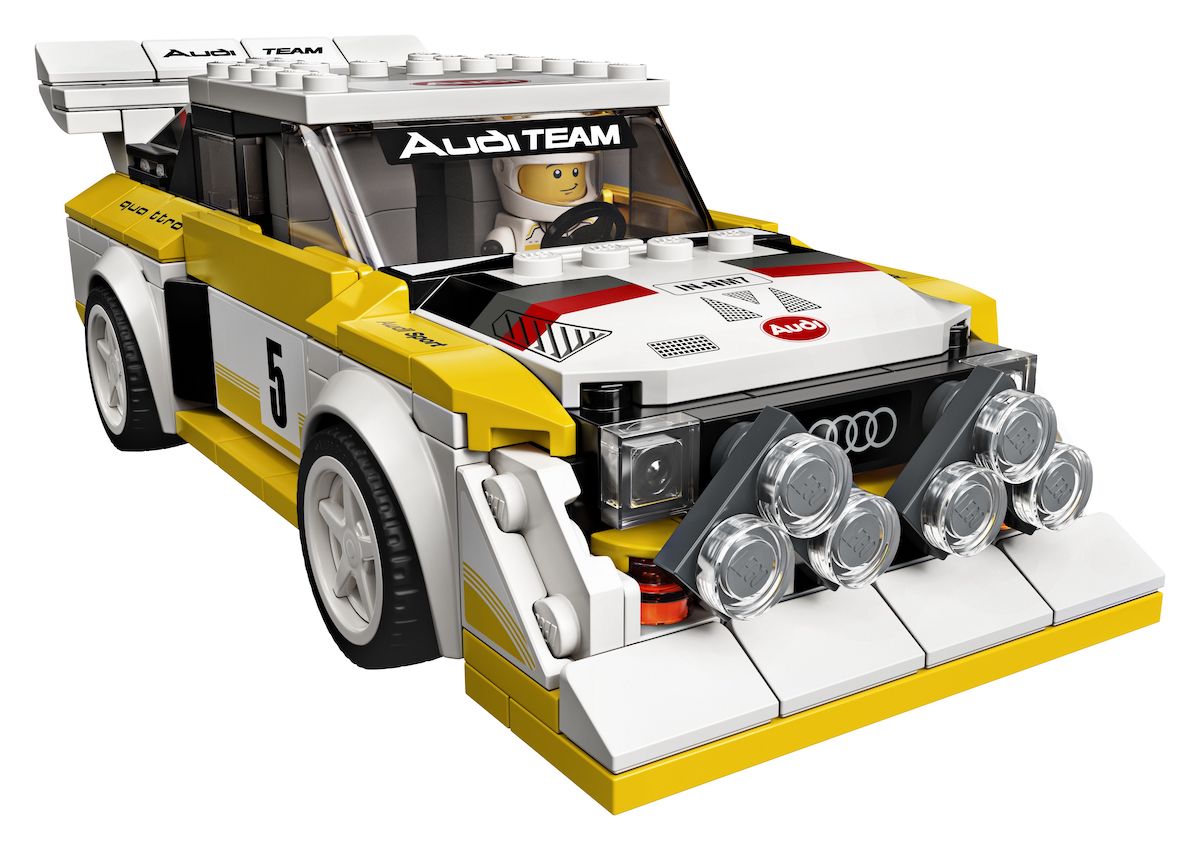 The LEGO Speed Champions 1985 Audi Sport quattro S1 in its classic yellow and white livery from rally days. Hard to miss this model being 8 wide with that wide splitter and the two fog light banks on the front of the model. The wide arch nature of this set would have been difficult to replicate in the old 6 wide format.

The model is in the period correct Audi Sport yellow and white livery, with minimal stickering used. This set can be the hope of those wanting to modify their older Speed Champions sets as it does appear the wider windscreen used here has an "Audi Team" sticker applied rather than a pre-printed graphic. Given this is an 80's car with relatively blocky styling in the real life vehicle, it's not too surprising that the LEGO rendition looks great - the lights are dead on and the overall proportions of the vehicle look great. The set comes with two different style of wheel trims, both in white. 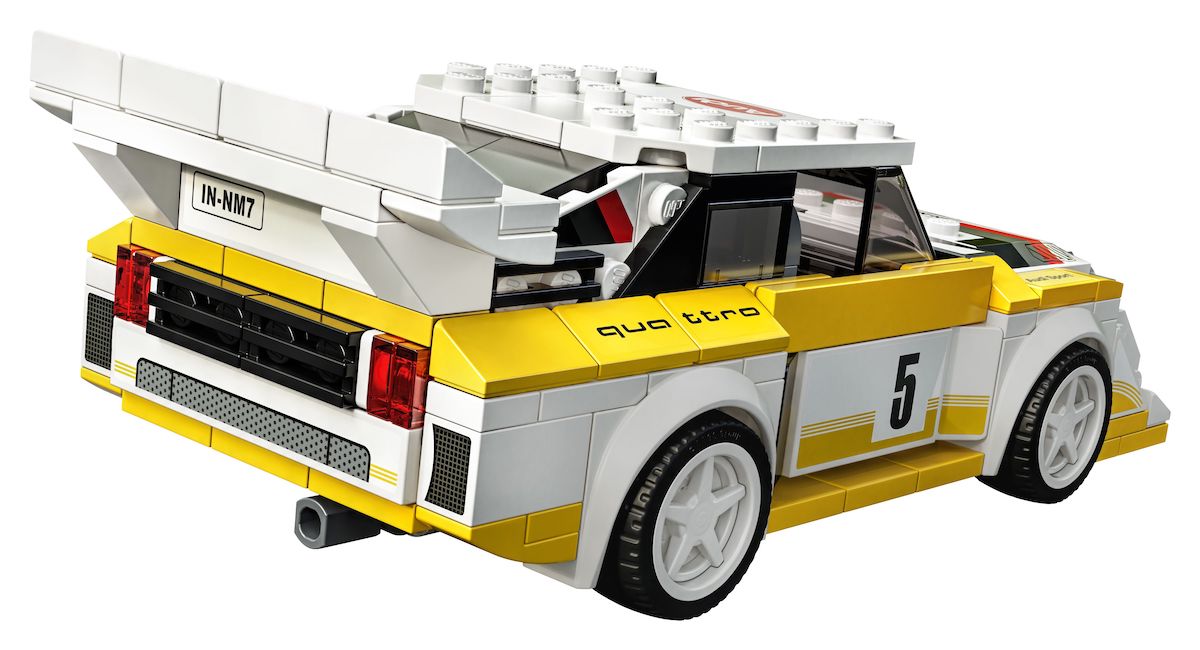 The rear of the Speed Champions Audi Sport quattro S1 with that huge rear wing and showing the rear detail of the model. We're loving this one, with the wide arches, 5 spoke wheels and that neat exhaust detail.

The rear of the model is especially neat, with a number of stickers used around the back to replicate the grills on the real model and the vents on those wide arches. Having the wheel arches outboard of the actual cabin of the vehicle gives it that rally look and makes use of the extra width on the models. The set is slated to have around 250 pieces. 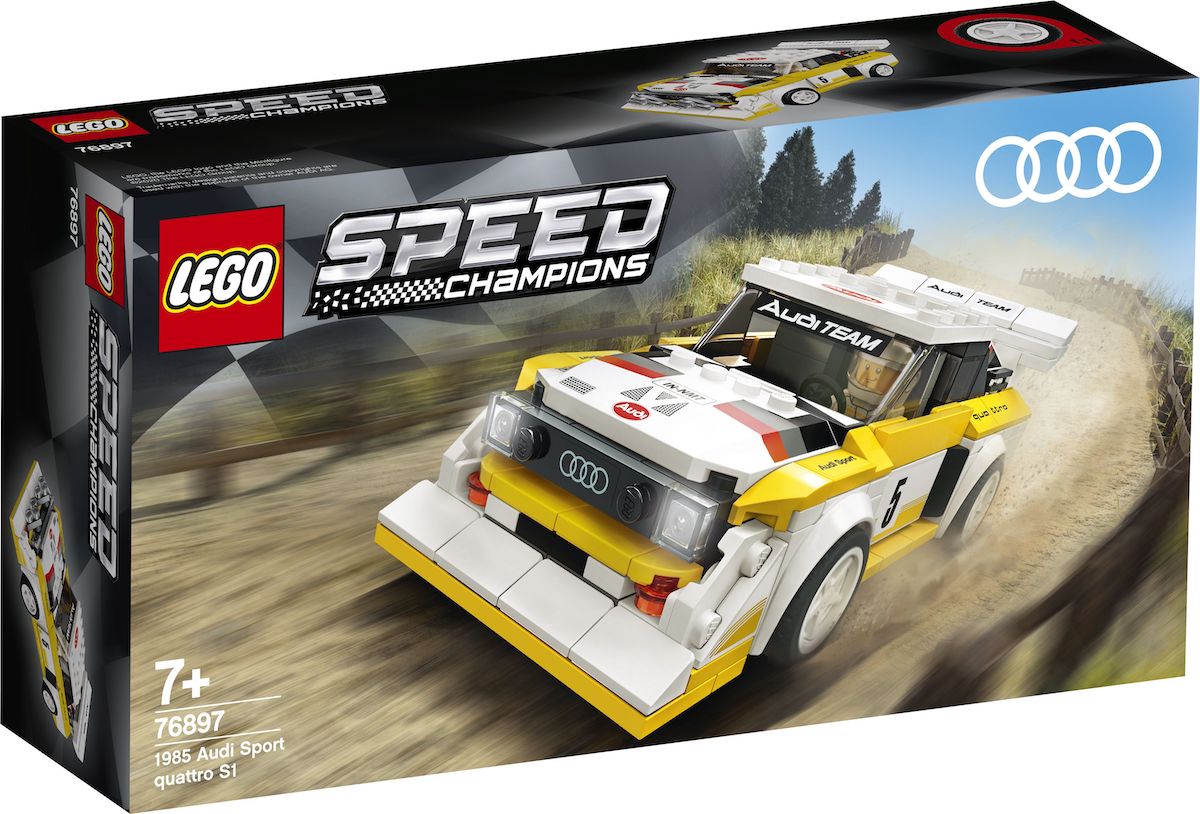 Box art for set 768987, the LEGO Speed Champions Audi Quattro S1 - showing the car in action on a forest stage.

As LEGO tend to make it very clear where stickers are on their renders (possibly to avoid dissapointment when people have to apply them?) it does look like the Audi Sport bonnet graphics on this set may be printed on. Given it's such a prominent area on the vehicle, this would be great news. 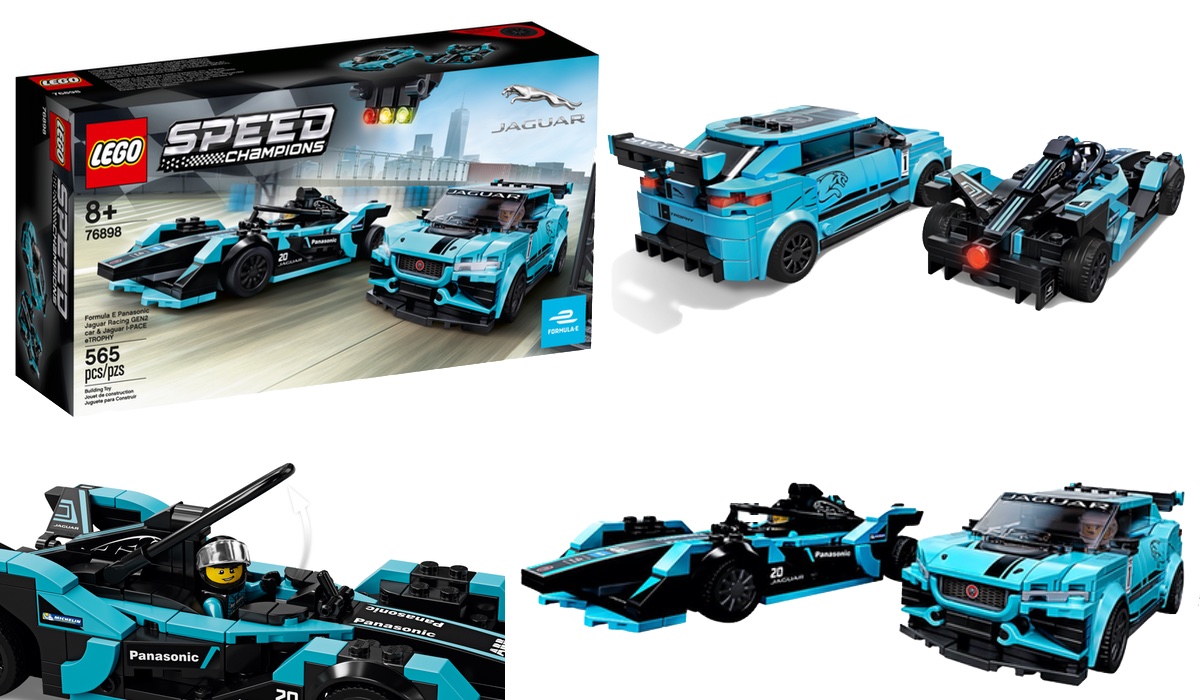 As per our original coverage of the Jaguar Speed Champions announcement this Formula E themed twin pack is part of the 2020 line up and coming in relatively cheaply at CAD 39.99. With 565 pieces this forms a budget option against the Lamborghini Twin pack. The set includes two minifigures in Jaguar race suits and a start line gantry with staged lights to replicate some Formula E action. 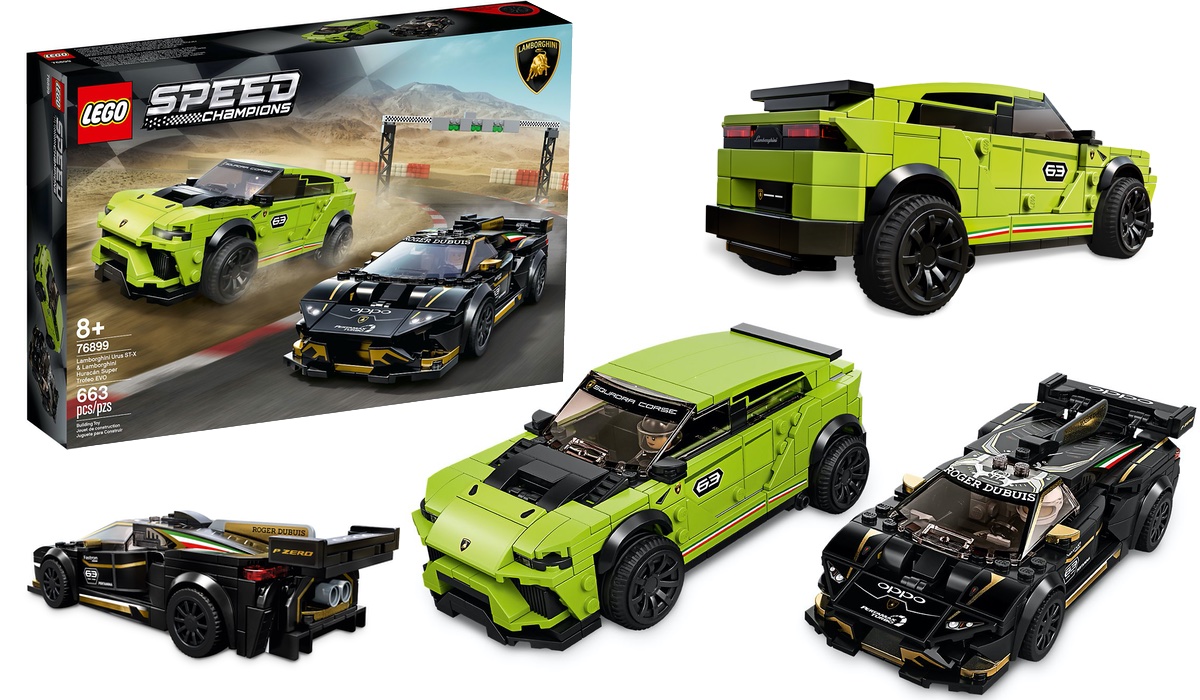 The long awaited return of the Lamborghini brand to LEGO is finally happening in 2020 with the Huracan Super Trofeo and Urus STX double pack in the Speed Champions line. This is the largest set announced for the first half of 2020, with 663 pieces and a high retail price of CAD 69.99 for the same number of vehicles as the Jaguar twin pack... there's been much controversy over this price point online. Again with this set a start line with lights is included (I'm almost thinking to placate fans about the price point/make the set feel larger), plus two minifigures.