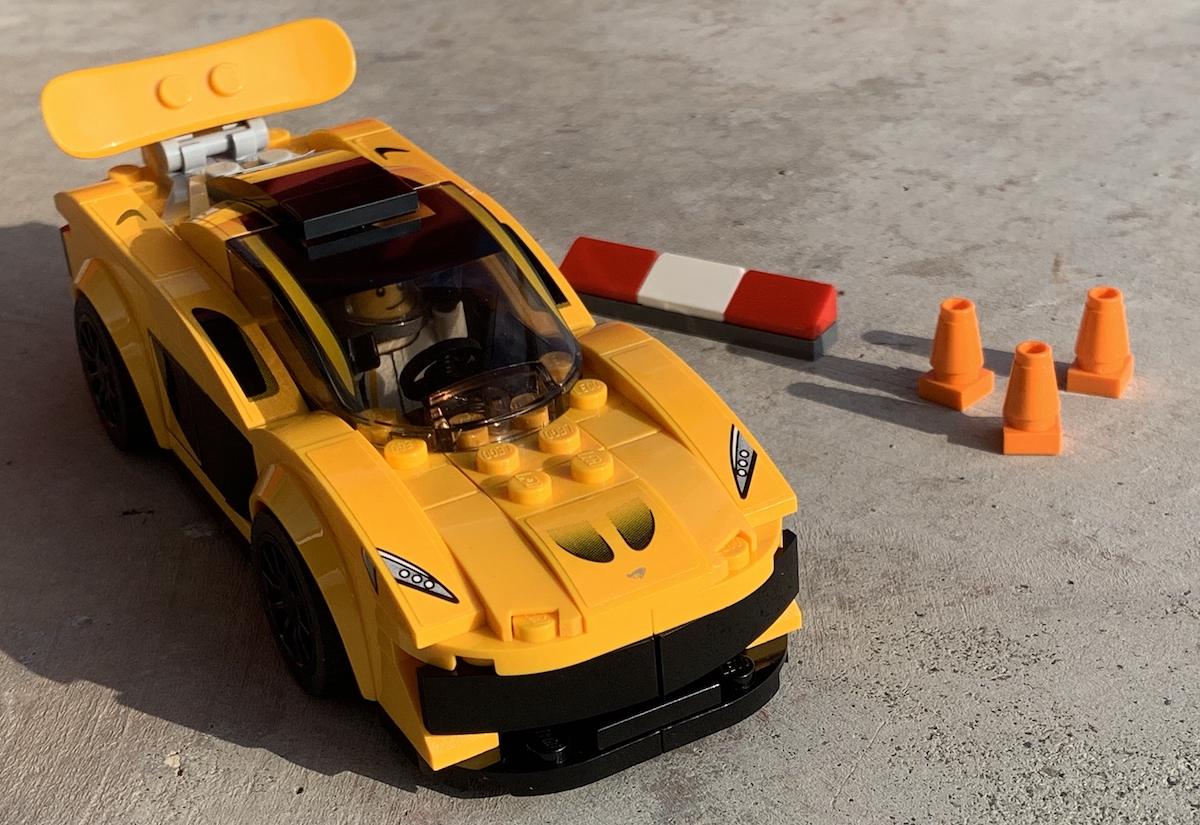 We're going all the way back to the origin of Speed Champions today, with one of the original seven sets that made up LEGO's original release in the series, the McLaren P1 - set 75909. As we discussed in our article covering the introduction announcement, LEGO had the opportunity with their original 2015 launch to release what car fans call the 'Holy Trinity' - the three cars that defined the term hypercar - the McLaren P1, Ferrari LaFerrari and Porsche 918 Spyder.

The McLaren P1 represented McLaren's long awaited return to ultimate road cars, with the McLaren F1 almost 15 years earlier. The real world vehicle is a very aero-based design, not to the extent that we've later seen with the McLaren Senna, but very curved with large inlets and a low front profile. 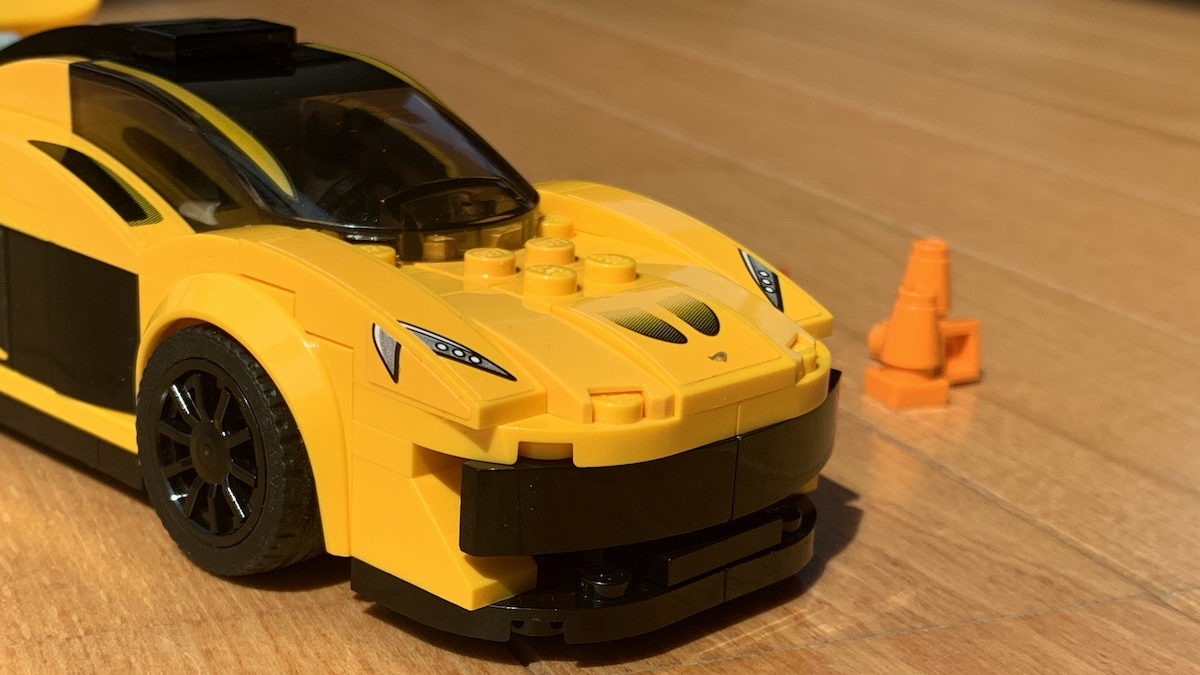 The front of the McLaren P1 is less swooping and aggressive than the stickers would suggest. You can see the pair of stickers making up the headlights, one on top and one on the side.

LEGO's early Speed Champions sets were quite hit and miss at capturing lower, sleeker vehicles in brick profiles and this McLaren P1 set is no exception - the front profile is very tall and the sides high - side by side with a 911 or other more regular vehicle the model doesn't really capture how low and sleek a P1 really is. This set would be about right if it was a whole block lower at the front, but that wouldn't work with the Speed Champions scale wheel arch and wheel assembly pieces.

LEGO went with a yellow colour for this model, matching one of the initial press release vehicles from McLaren ("P1 OOU") in a Volcano Yellow color scheme. A lot of the contemporary media coverage covered Black ("P1 OOV") and Volcano Orange press cars. Yellow's a sensible choice here as black would have limited the ability to detail with black blocks - we didn't see McLaren's typical Papaya Orange on a Speed Champions model until the 2017 release of the McLaren 720S. Against the rest of the holy trinity, with the Silver/Grey Porsche 918 and the LaFerrari in typical Ferrari red, the colour is striking and really catches the eye when out on display. 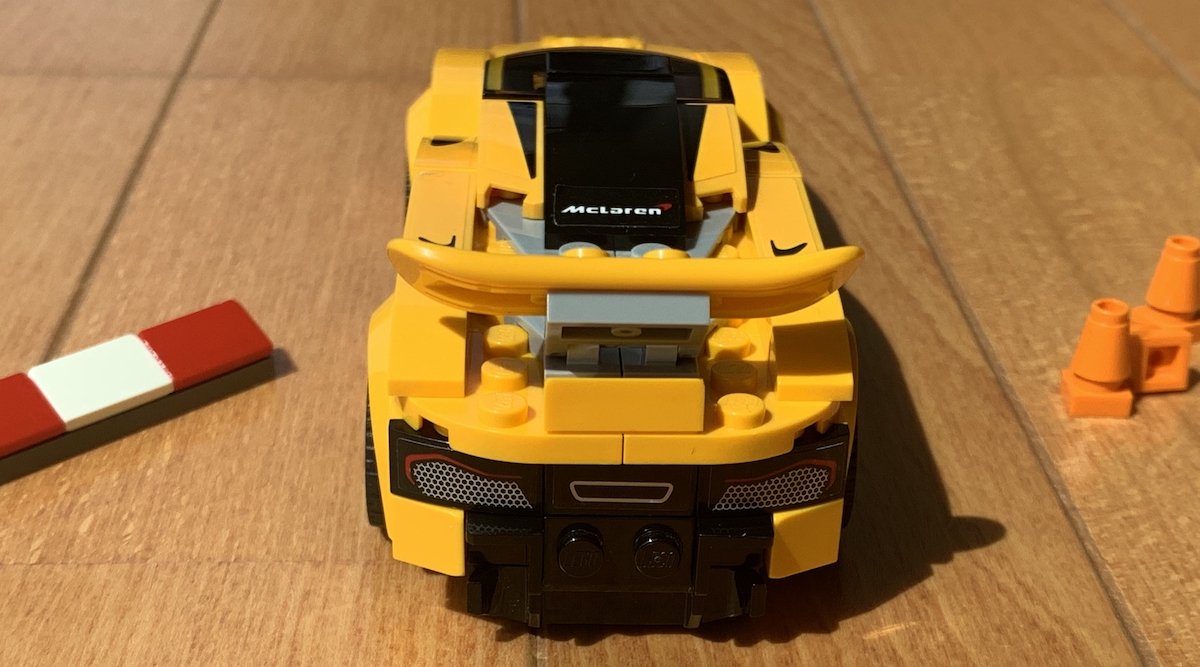 The central exit exhaust and thin LED strip rear lights are captured in stickers. You can see the hinged rear wing built from a surfboard piece, here in a moderate position.

The build uses stickers for quite a significant amount of detailing - the iconic roof scoop has been modelled really well though and adds a modern McLaren vibe to the set. The headlights actually span two stickers, one on the top surface of the model and one along its side to create the impression of curvature at the front.

A cool LEGO touch to this set is the use of what looks like a surfboard as the rear wing of the car. The real life P1 has an aggressive rear wing which also acts as an airbrake - there's a hinge mechanism on the rear of the set that the wing mounts to, allowing it to be moved all the way up to 90 degrees to the car, replicating this, which is a nice touch. The single, central exit exhaust and vents around the razor-thin LED rear light strips are captured in stickers with black backgrounds. 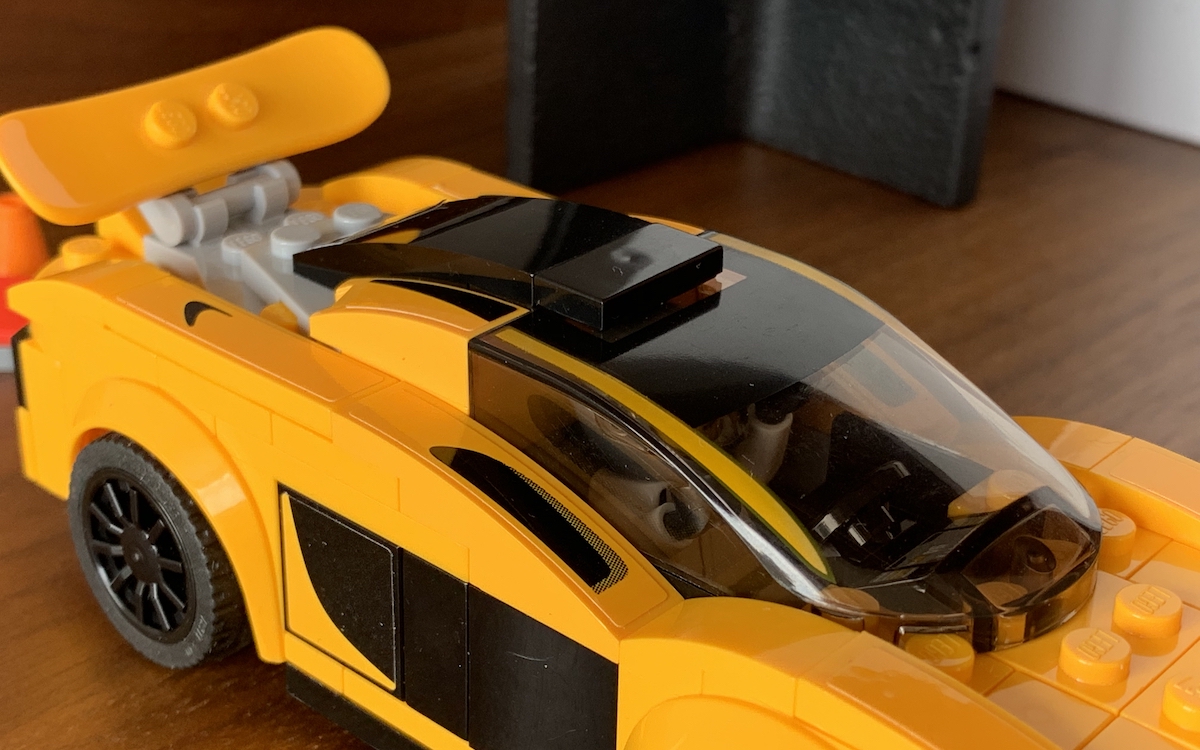 The roof scoop is typical modern-day McLaren and the set captures it well - that surfboard still catches the eye though. The rear arch design relying on a sticker spoils the side a little though.

The rear engine cover also looks great, with a McLaren logo prominent and sculpting much like the real car. I'm not a huge fan of the stickers to add texture on the long flat panels for vents along the side and to each side of the engine cover. The designers did a good job at the side sculpting toward the front arch, with panels that mount sideways onto the car, although again the use of a sticker to capture the rear arch profile leaves a weird look. Speed Champions models in general struggle with front and rear widths being the same, but with the length of the model it's hard to get the proportions to make it a stud wider at the back.

The splitter and diffuser on the model are pretty good, relatively straightforward compared to sets we saw later in Speed Champions' lifetime but representative of the real life car and add interesting detail. 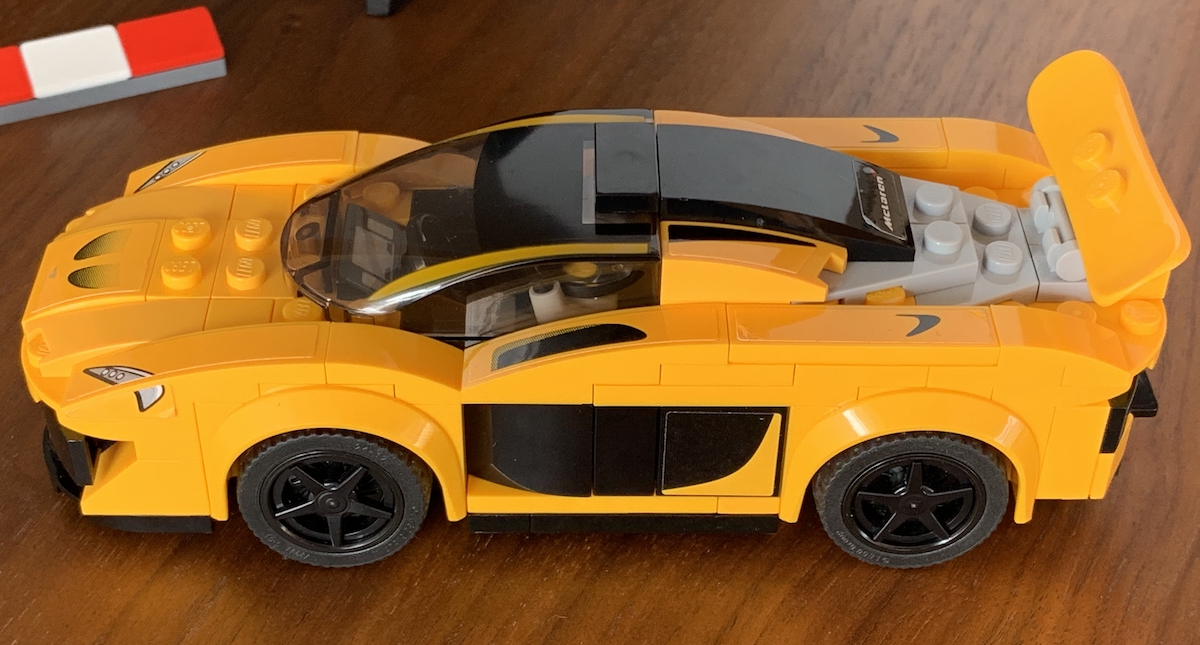 The side profile of the LEGO Speed Champions McLaren P1. The side profiling of the car goes a little high for my tastes, I'd rather have kept it lower overall - the indents near the front arches are a nice detail. These are the five spoke rims available in the set, my personal preference.

The set comes with two sets of wheel rims for the car, one five spoke set and one multi-spoke set. In real life, the vast majority of P1's have a multi-spoke wheel rim but LEGO's rims lack the depth of the real life vehicle and don't look their best on this set. The five spoke wheel set looks great on the model though (you'll see a mix of both in the photos on this article). I'd have preferred to see them in a dark grey rather than black to provide some contrast.

Accessories are very light with this set, three traffic cones/pylons and a strip of 'kerb' thats only 6 studs long. It's nice they didn't feel the need to come up with too much of a theme for such an iconic car, and there's not too much guilt with leaving these accessories in the box. They almost seem to be the token effort - the individual '74 Porsche 911 Turbo 3.0 set coming out next week contains the same accessories, and we know that set is intended to be a bare-bones way for fans and creators to get hold of the 911 model from the larger 911 and RSR set it originated in. 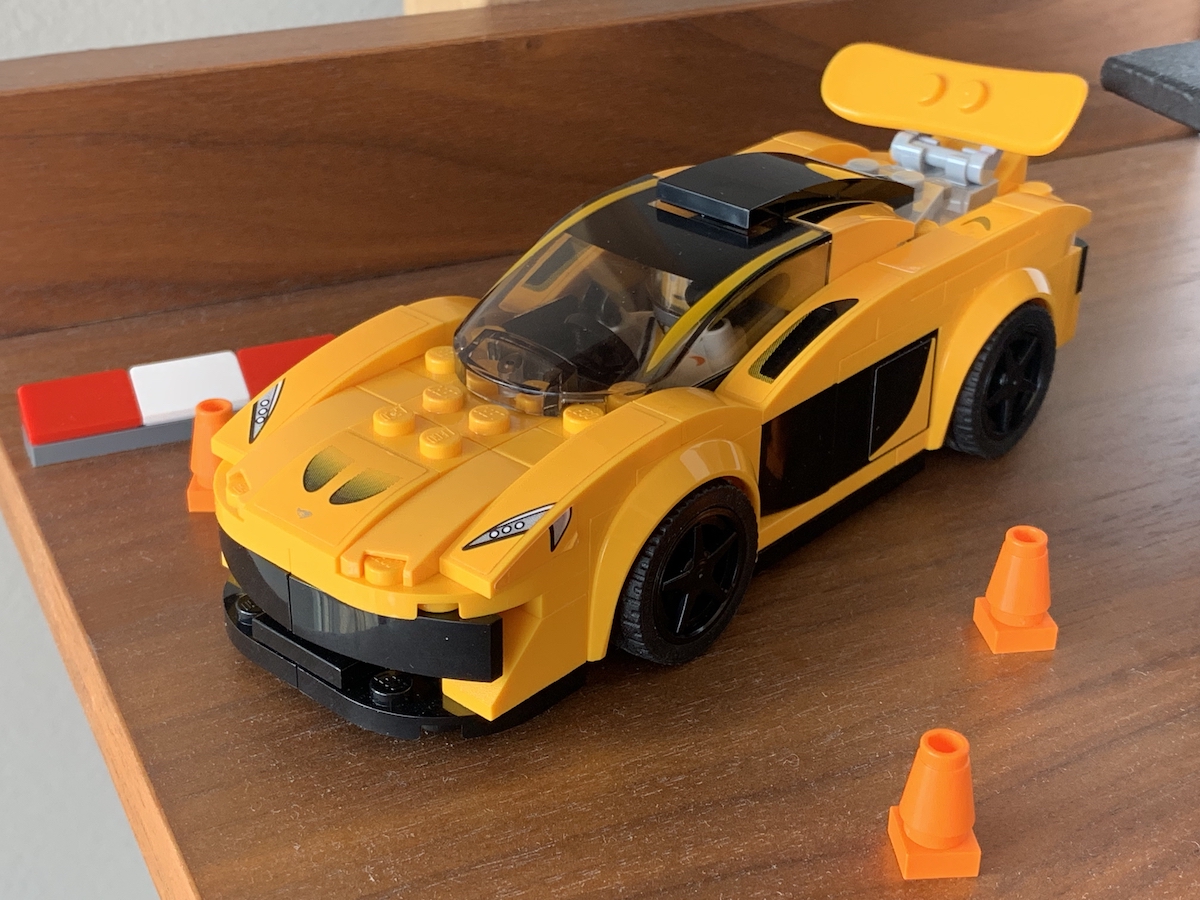 The P1 amongst its minimal accessories - three cones/pylons and a short piece of racetrack style kerb. This typical display of the model shows it's really worth the space on your shelf.

We didn't see a follow up McLaren P1 GTR variant in the Speed Champions line - as we mentioned above, this model was followed up with a 720S model in 2017 and then the McLaren Senna in 2019. With a roughly two year release cycle on McLaren sets to date, we'd next expect one in 2021 - so not a brand we're expecting to see in the 2020 Speed Champions releases. 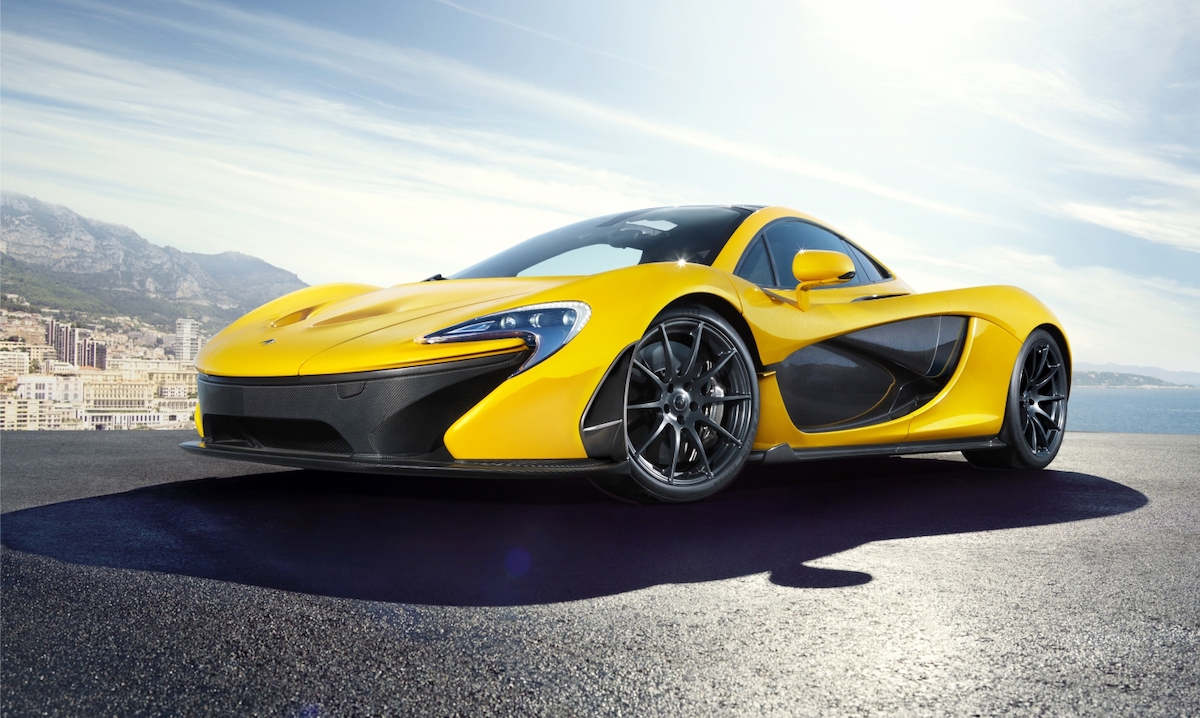 The original member of McLaren's "Ultimate Series". With over 900hp on tap from a 3.8L twin-turbo engine and hybrid combination the McLaren P1 brought the Woking manufacturer right back to the pinnacle of road cars in the spirit of the original and unparalleled McLaren F1. 0-60 mph takes just 2.8 seconds and with a limited top speed of 217mph (most likely to prevent tyre issues), very few cars can compare to the raw speed of the McLaren P1.

While there's no race success to speak of, as the 650S and 720S have formed the basis of McLaren's race program outside of Formula 1, the McLaren P1 GTR shows what this car is capable of in motorsport trim.

Overall: 64 (How we rate sets and models)

You may think the scoring is a little harsh on this model, but hear me out on it. The number of stickers used and the overly thick profile of the set mean it compromises the balance between being a LEGO style model and aiming for ultimate realism. It ends up in an awkward spot, scoring 3 for both LEGO-ness and Detail due to not really being exceptional at either.

The build is reasonable, there's nothing too crazy except the surfboard for the rear wing to earn the model points in this regard. This model displays well, being one of the three most significant cars of the hyper-car generation. The accessories being minimal is good, but does limit what we can give out in score - regular readers will know we prefer the minimal accessory sets, but given the total piece count is around 10 for them it's very minimal in this case.