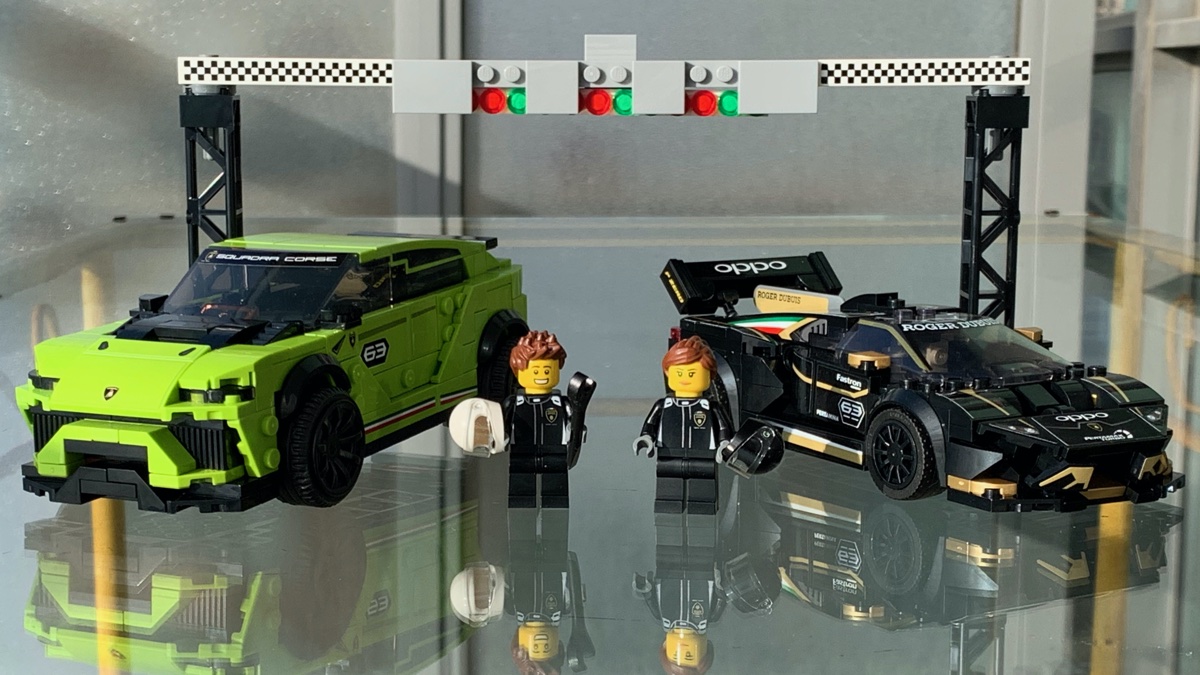 It’s been a long wait to see Lamborghini back in LEGO form following the last time, with the Lamborghini Polizia (Set 8214) all the way back in 2010. This year, as part of the 2020 Speed Champions wave we're seeing a twin pack set, appropriately the most expensive set for this year, and luckily for Lamborghini fans part of the new more-detailed 8 wide wave of sets. The two car set covers both the Urus SUV and Huracan super-sports car in a race car livery, similar to the Jaguar Formula E twin pack. With 663 pieces this is a substantial set, especially when you consider the move to avoid lots of accessories with Speed Champions sets going forward.

This Lamborghini set and the Nissan GT-R NISMO are some of the most desired and wishlisted Speed Champions models, so to see them both this year is a real step forward for the line. As is normal for these new, 25% larger sets, there are multiple bags of pieces per vehicle, so this set ends up with quite a few. There are two instruction manuals present, so two people are able to build the two vehicles in parallel which is a nice touch. We won't talk about it in any detail, but there's a basic Start/Finish line gantry included which is very similar to what we've seen in other sets through the years. 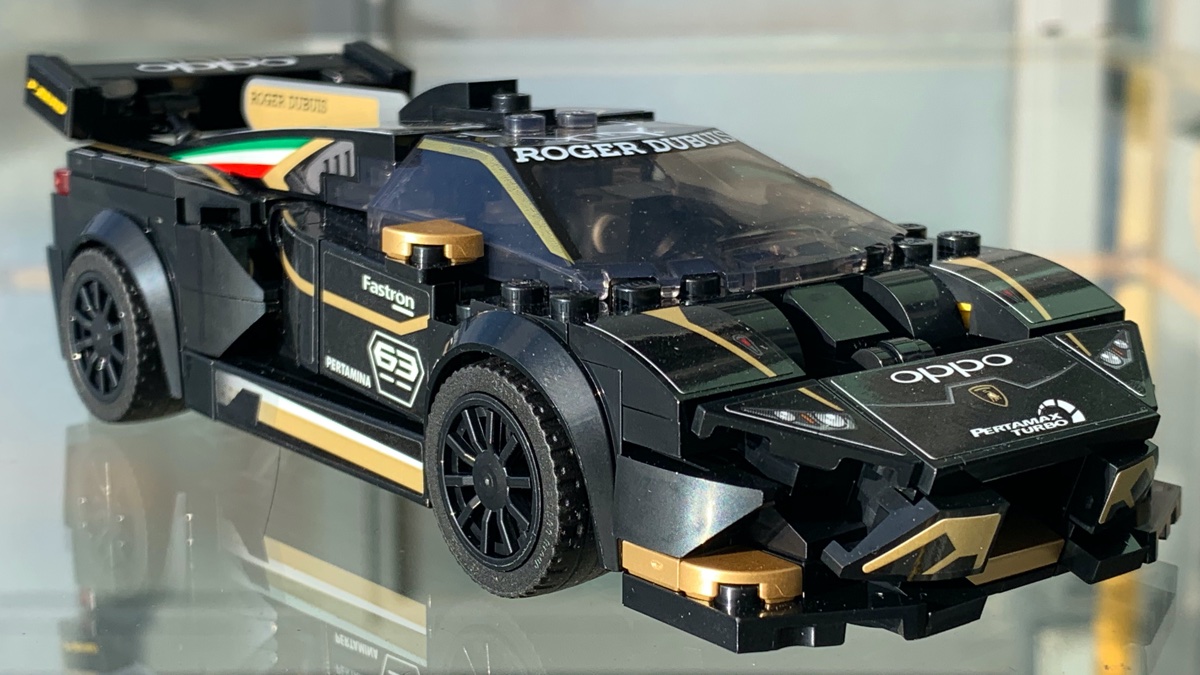 The black and gold livery of the Huracan Super Trofeo EVO looks great, with actual gold bricks in addition to the stickers. The pointy, aggressive nose (using a hinge which doubles as a bonnet vent) really captures Lamborghini's angular design style.

Let's start the review by looking at the Huracan Super Trofeo. The Lamborghini Huracan itself has been around for some time, first shown in Geneva in 2014, and this is the first time we're seeing it in LEGO. Both the Huracan and its bigger brother, the Aventador, are relatively long in the tooth and surprising to see in the Speed Champions line. LEGO have chosen to replicate a race version of the Huracan and that's meant we've got a black and gold colourway - non-traditional but certainly looks striking alongside the rest of this year's models. People have had high expectations for the addition of Lamborghini to Speed Champions and the sleek, well proportioned model made possible by the new 8 wide format really does it justice 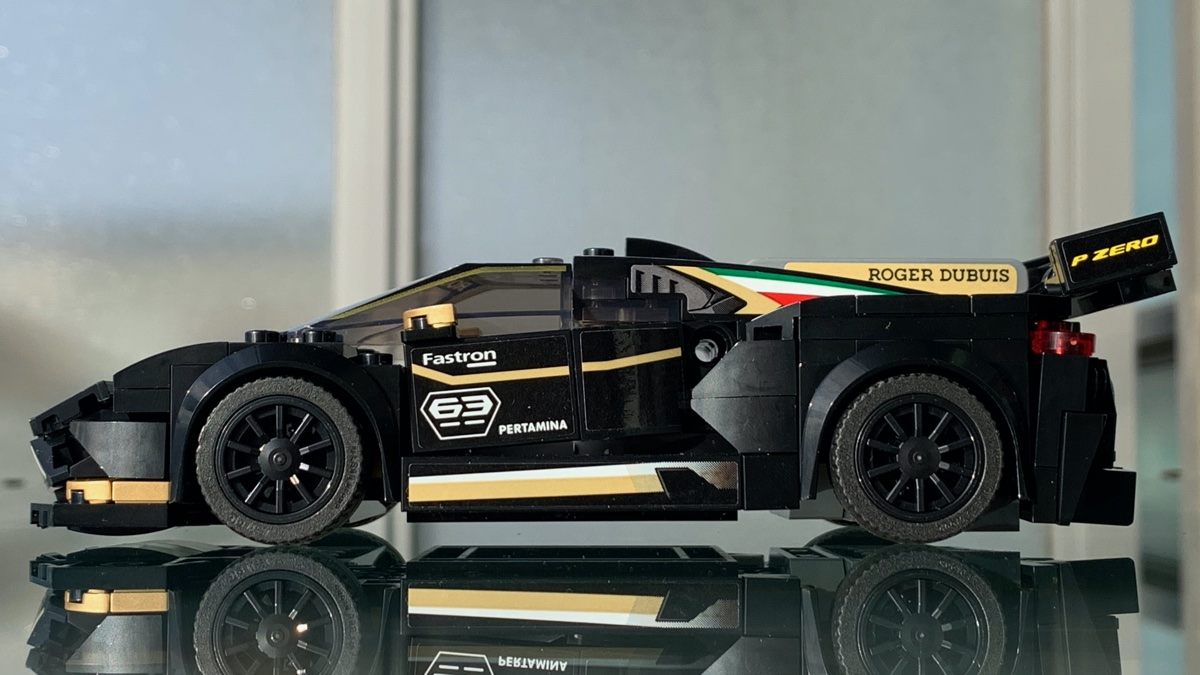 Side profile of the Huracan showing off that thin profile - just 5 bricks high. The adjustable rear wing with P ZERO stickers gives the set a motorsports feel. (The rear clip is slightly detached in this photo, hence the droop, sorry about that!)

This particular Huracan model is based on the 2019 Lamborghini Squadra Corse 'Collectors Edition' race car, available for customer race series. Popping with contrast in black and gold, the LEGO model has realistic sticker detailing, so the real-life partnership with luxury watch manufacturer Roger Dubuis features heavily in the stickers on the set. It's great to have actual Gold bricks and plates as part of the set, running around the bottom of the car - we first saw this on the Polybag version of the Huracan Super Trofeo and they work great here. The gold wing mirrors are a really good touch, this is another 2020 model that's gained wing mirrors with the additional level of detail.

On top of the model, as with the actual race car, there's a skeleton/tourbillon watch design on the roof. The design is based on the Excalibur Huracan Performante watch from Roger Dubois (a cool $52,500 if you're curious). Other Lamborghini partners feature on the bodywork and the (adjustable) rear spoiler (Oppo, Pertamina and Fastron). One thing I would have liked to see is LEGO matching the real life car and maybe putting some extra details in. An OMP tow rope on the front left of the bonnet, or access ports for some of the actual racing work the real life car will be doing would add a level of detail to the stickers to match the larger scale. 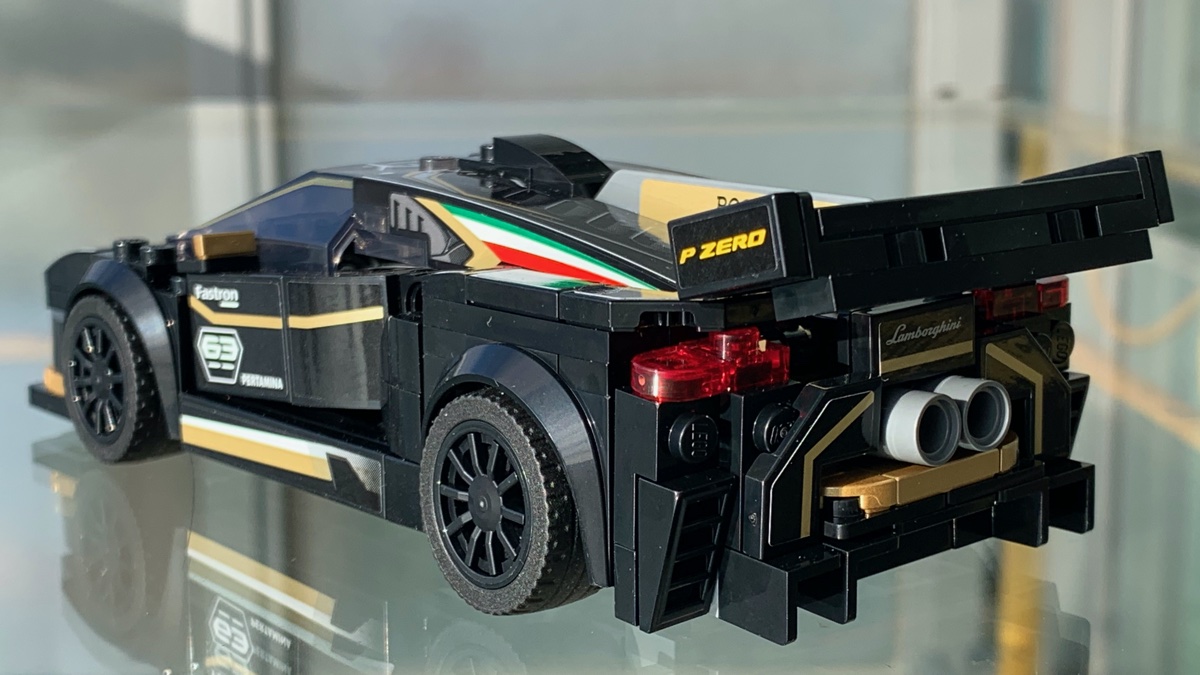 Rear three quarter view of the Huracan Super Trofeo shows the central twin exhausts and tasteful Lamborghini badging. As noted above, theres some damage to this model and the lights should be tucked right under the rear spoiler. The diffuser and the vertical slopes making rear vents show the detail possible in the 8-wide format.

Building the Huracan Super Trofeo is a lot of fun. The model uses the standard new Speed Champions chassis and wheel mounts and uses a hinged front to replicate Lamborghini's trademark low, slanted front design style. There are a lot of stickers in this set, which some die-hards have found disappointing, but the end result looks great - the center console uses a sticker inside as well. The sponsorship level is about right to give the model a race-car feel without being over the top. The only disappointment with the stickers is the two large ones making up the entire engine cover/rear top of the car - the Ferrari F8 Tributo set this year has a built engine cover resembling this one and we've seen them before so it feels like something we could have seen more brick detail for.

In terms of build details, there are some nice easter eggs here - with Lamborghini's trademark doors (although they don't actually move all the way up in the finished model), and the central fin made of a sail or blade, mounted cleverly using offset plates and tiles. The rear wing/spoiler on the model is adjustable and the hinged front also does double duty as a bonnet vent, looking aggressive. The model has a short wheelbase and long overhangs, giving it that supercar look. Generally, the car suits the 8-wide scale a lot better than it would have 6-wide - it's low, wide and aggressive. The rear looks really good with all of the aero work going on, the huge double exhaust and the slim rear lights. 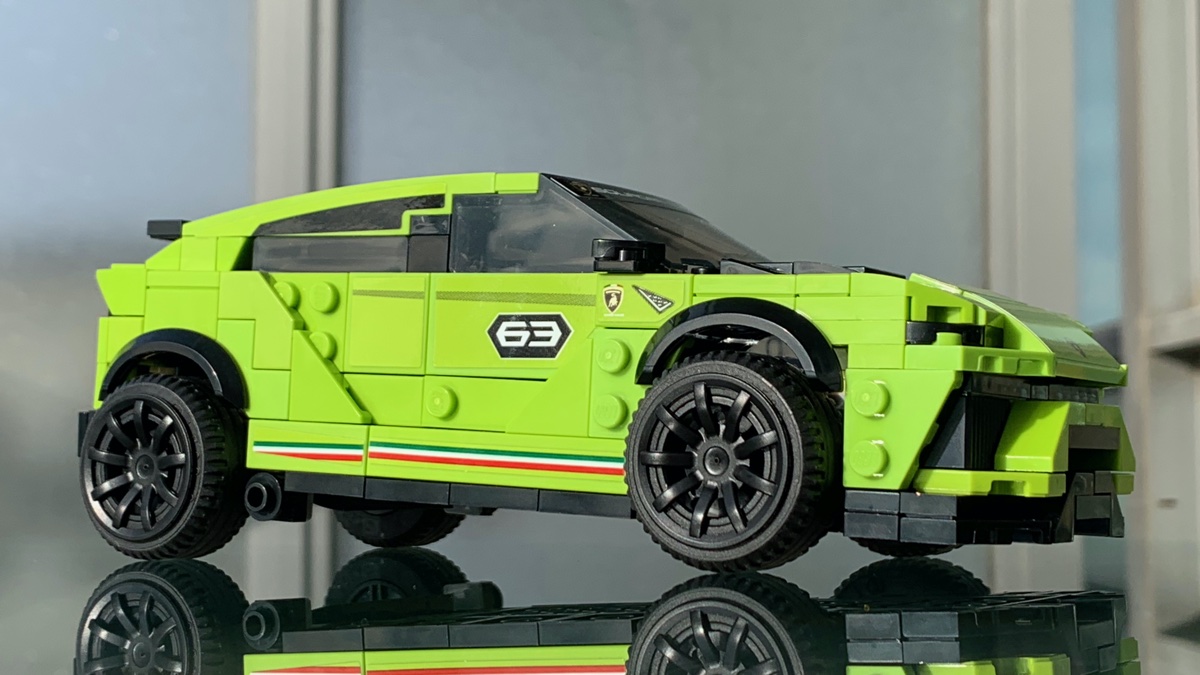 The Urus ST-X couldn't be much further from the Huracan, with a thick chunky posture, huge rims sitting outboard of flared arches and a front down stance to the model. The huge wheels and wheel trims make this look like the off-road monster it is.

The Speed Champions Urus ST-X model is an interesting beast. It doesn't use the standard wheel mounting that we've seen on other models and there's a lot of effort gone into scaling the 8-wide design language up to a larger vehicle. Coming from the subdued black and gold colour scheme of the Huracan this bright green Urus really stands out (not only because of how big it is!). Of course the Urus is here because of commercial/contractual reasons with LEGO and Lamborghini - it's unlikely too many people were crying out for a Speed Champions Urus. Naturally we'd have preferred to see a Lamborghini Aventador SV or a legendary, classic such as the Diablo or the Countach. 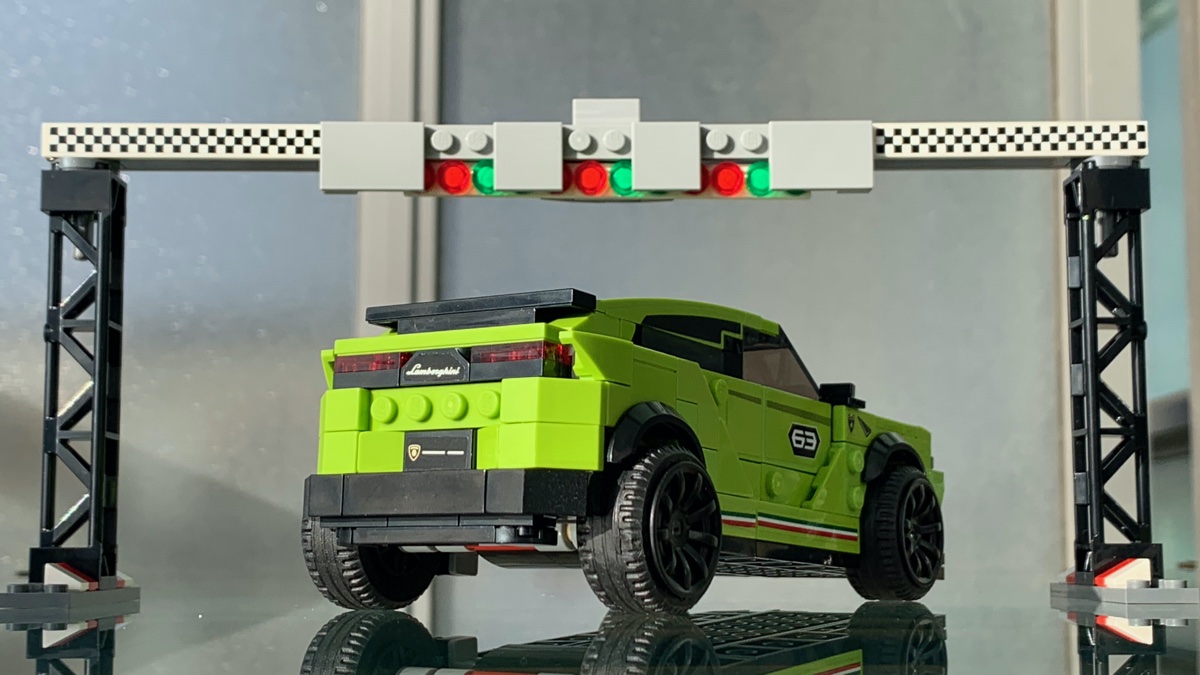 It's hard to miss the bright green colour scheme, and this set is incredibly eye catching on display. The rear of the Urus does lack a little in detail, with just the Lamborghini badges and Squadra Corse branding in the licence plate area. This angle shows the sloped roof, rear window spoiler and that front down posture.

On to the model itself, there's quite a bit of front to rear rake, with a super long wheelbase and chunky 30.4x14 LEGO tyres on the wheels (almost reminiscent of the Chevrolet Camaro Drag Race set). We've actually seen these wheels before, on the '74 911 Turbo, but here some wheel trims make the wheels look much bigger and in proportion to the Urus. We'd love to see this trick of making the wheel/tyre proportion more in line with modern cars used on other models.

Side exhaust pipes are present, which look super cool but be careful when moving the model as they can get knocked/fall off easily. The model itself has a cool looking long sloped roof, complete with spoiler, which lifts off easily to reveal the interior. You can almost fit four mini-figures in here too (no chance of that in the Jaguar I-PACE set, where the rear seat area is filled with bricks). There's a center control stack very similar to the one found in the Huracan, and relatively minimal use of stickers here - just the Italian flag decals on the sides, some badging and a race number. 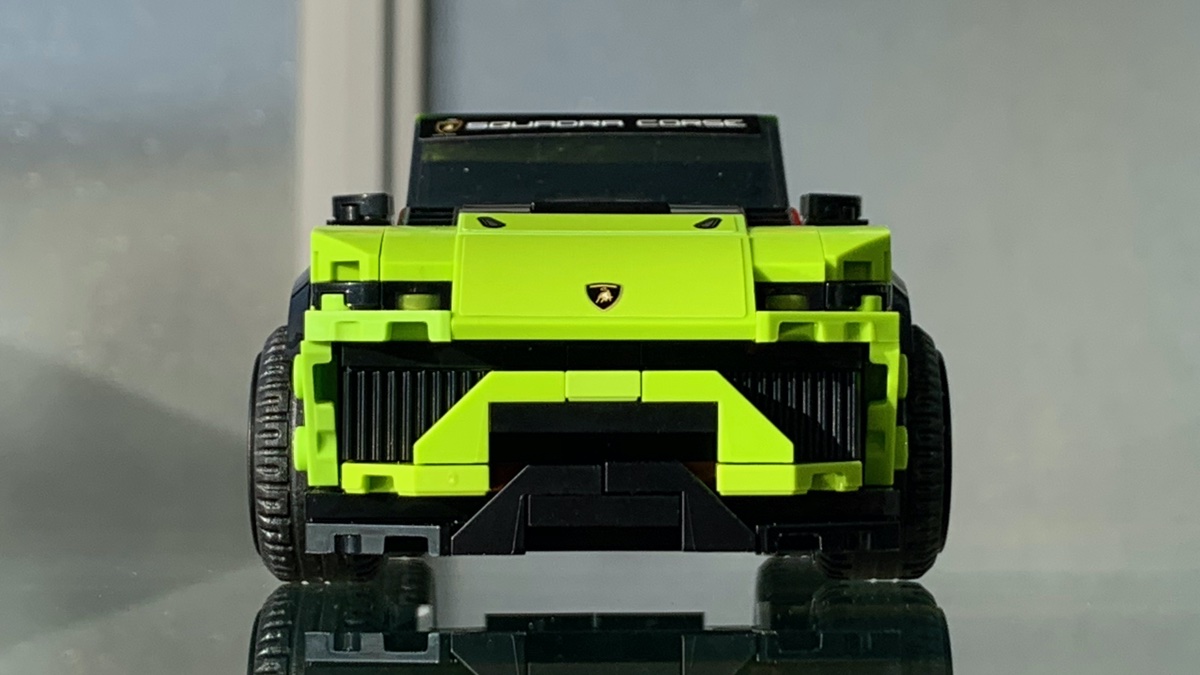 Front on view shows great detail with corrugated blocks replicating a wide open radiator, and built in details on the front bumper and splitter. The tiny, slit-like lights are accurate and the overall angular nature of the Urus is replicated well in the model.

Before 8-wide models became the norm this year, we'd previously seen SUVs released in Speed Champions being this size and shape, notably the Ford F150 Raptor from 2016. With the Urus, the front splitter design is great and side by side with the actual vehicle it really replicates how aggressive it looks and how high it sits off the ground. The only thing I would have changed about this model is the rear three quarters as it looks quite blocky and doesn't capture how aggressively the Urus ST-X slopes at the back. There aren't too many built details at the rear of the model, but we'll forgive LEGO for this for the overall quality of the model. 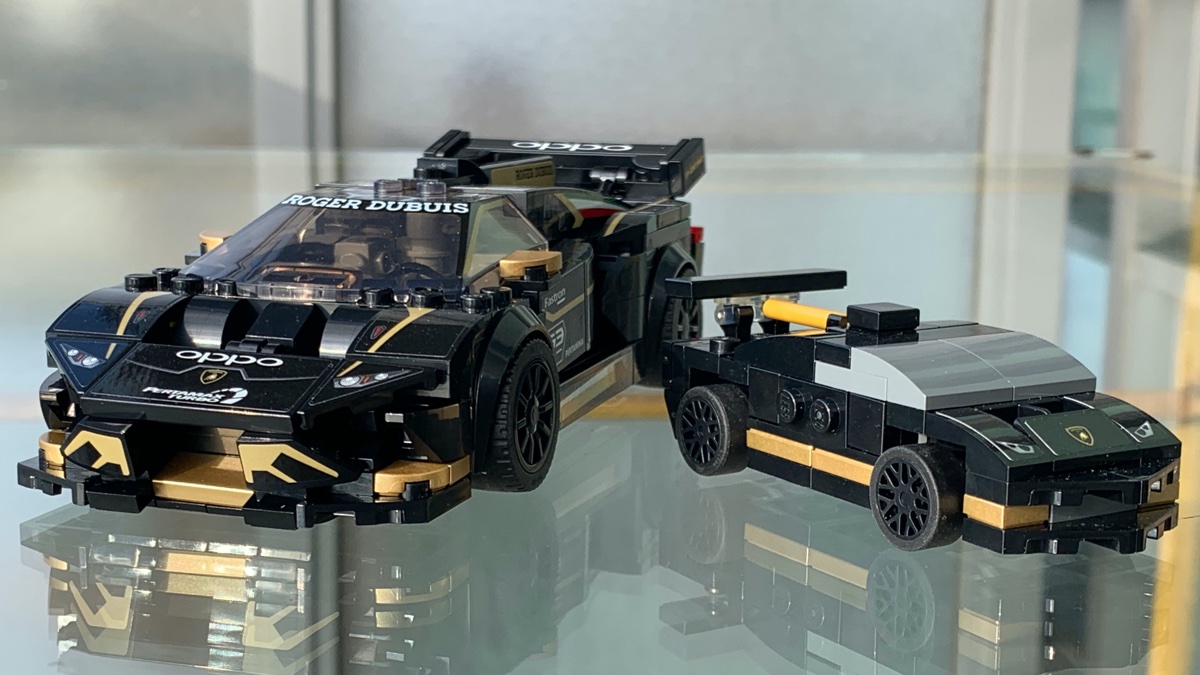 The 2020 8-wide Speed Champions Lamborghini Huracan alongside its cheaper, smaller poly bag version. Really shows what LEGO can do at different scales, with a genuine family resemblance.

Overall, well at £55 UK ($90 CA, $70 US) this is an expensive set by anyone's measure. Almost £20 more than the Jaguar i-Pace and Formula E car set from this 8-wide 2020 wave. On the other hand, this is a brand (Lamborghini) that we've been keen to see make its way to the Speed Champions line, and luckily, at a time when the models have grown to include more detail and drama. It's hard to be upset once you've bought this set, both models offer an interesting build and really great sets to play with or display once you're finished. I'm sure many would rather have seen the Huracan in a street version, but we'll have to wait and see what LEGO do in terms of re-releasing any of these vehicles in cheaper sets. Precedence was set with last year's single release of the '74 Porsche 911 Turbo in a different colour from the Porsche twin-pack, and given the expense of this set there'd definitely be takers for a single car Lamborghini set.

For Lamborghini fans in particular, the party isn't over this year - with LEGO announcing their upcoming release of a Technic Lamborghini Ultimate Creator Series (1:8) set coming out in the first half of 2020. We'll definitely be looking forward to that, and whether we're going to see any Speed Champions re-releases to match. (One thing's for sure - it's not going to be a Urus!).