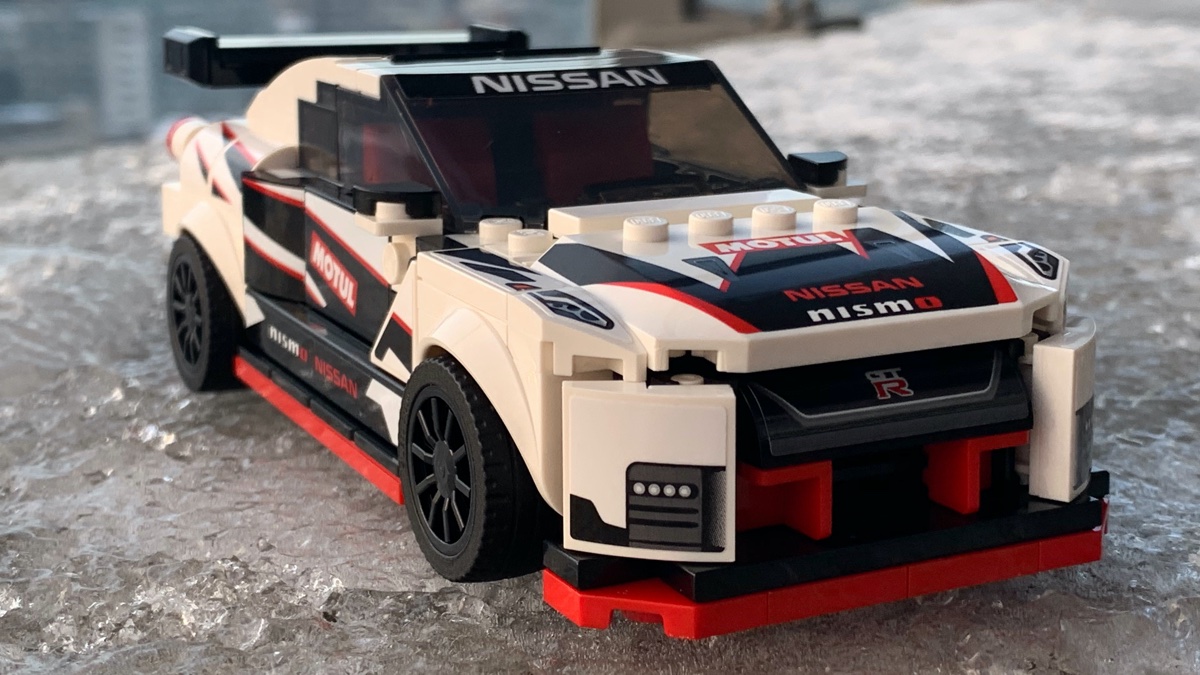 The LEGO Speed Champions Nissan GT-R NISMO, set 76896, looking at home here on ice. Styled after a drift spec GT-R this is the ultimate incarnation of the R35 GT-R and definitely not a vehicle we were expecting to see.

The Nissan Skyline has a legendary status among car enthusiasts, and more recently - with the help of films like the Fast and Furious movie franchise, an icon even with younger generations born after the heyday of the R32 and R34 Skylines. The R35, the latest iteration of the Skyline GT-R was originally released all the way back in 2007 and Nissan have been tweaking and refining it ever since. Between this Nissan GT-R and Lamborghini, you'd probably cover a large number of people's wants for the Speed Champions franchise - so much so that people thought the the original leak of the 2020 sets was actually just a wish list. As an aside, this is the first Japanese Domestic Market (JDM) vehicle LEGO have released in Speed Champions and maybe even for the LEGO brand in general. 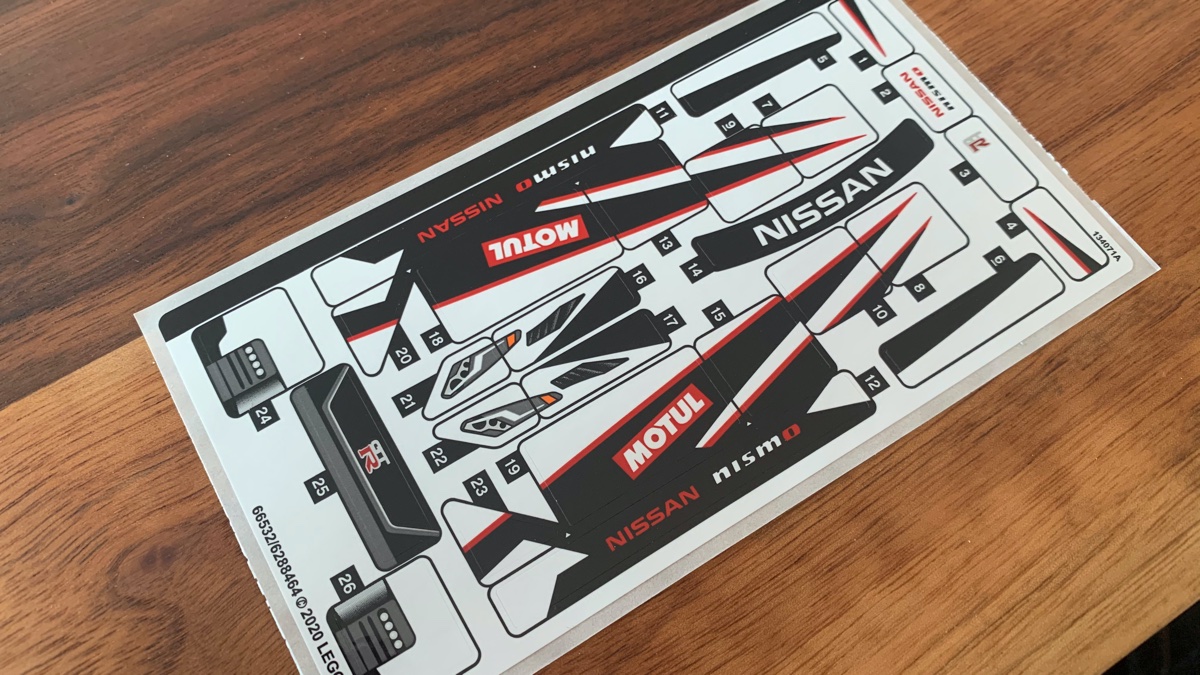 With 26 stickers on the sheet, this model will keep you busy applying them - as this replicates a drift/race car there are decals over nearly every surface on the model. Even the instruction booklet ends up getting one of the stickers wrong (upside down) on the side!

Let's get to probably the most opinion splitting feature of this set - there are a ton of stickers (26 in total) to get the race car look. As these new 8-wide sets are 25% bigger, and the GT-R is quite a chunky model overall it actually isn't overkill like say the Ferrari 458 Italia GT2 from the early days. The black and red highlights built into mostly white model the model don't make up as much of the livery as on the Audi Quattro model we reviewed earlier in the year which is in keeping with the real car, but does mean the stickers are necessary. The red highlights do look great however, with a diffuser and the front air intakes both built in red and side-skirts running down the side of the model. 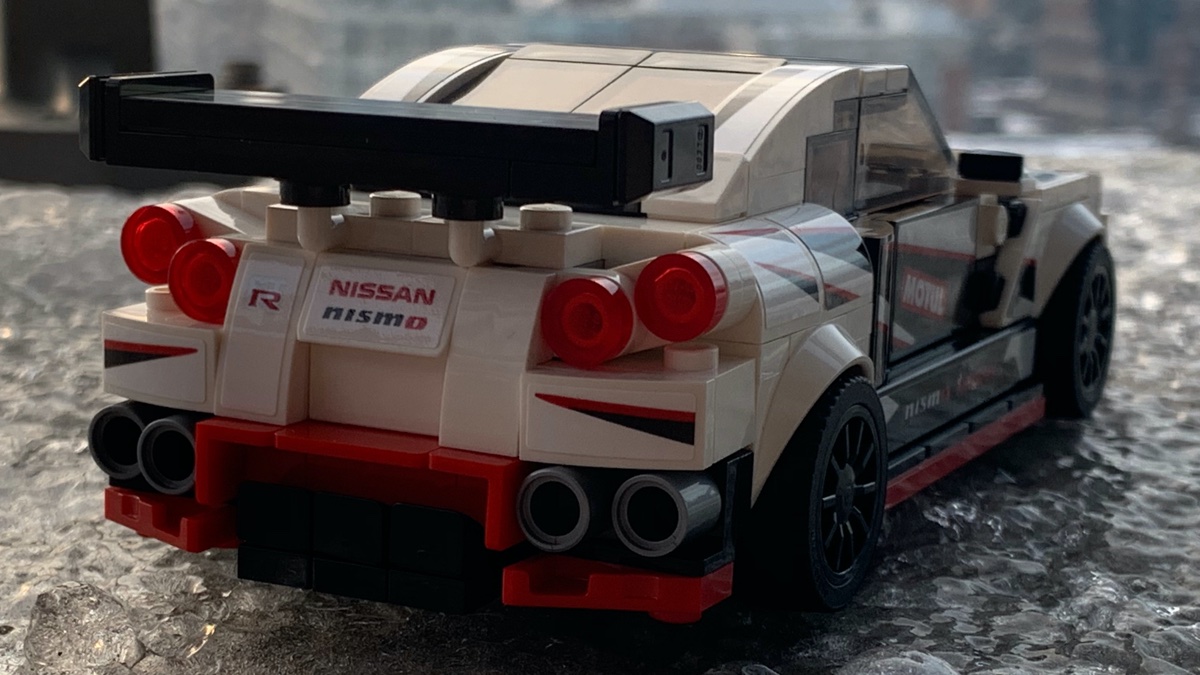 The trademark four round rear lights of the GT-R. The set designers came up with a great solution to angle the rear lights just like the rear thing. The four giant exhaust tips are also replicated on the model.

The car has minimal third party sponsorship, with just Motul stickers in addition to the manufacturer Nissan and NISMO (NISsan MOtorsport) branding. The livery matches the colours built into the model and it looks pretty good even without the stickers, with more of a street version GT-R vibe. An interesting gotcha when building the set is that the manual and store shots on LEGO.com actually show one of the stickers on the 2x2 curved black slope toward the rear of the car upside down, it's an unusual detail for LEGO to have gotten wrong and worth watching out for when you build the model. 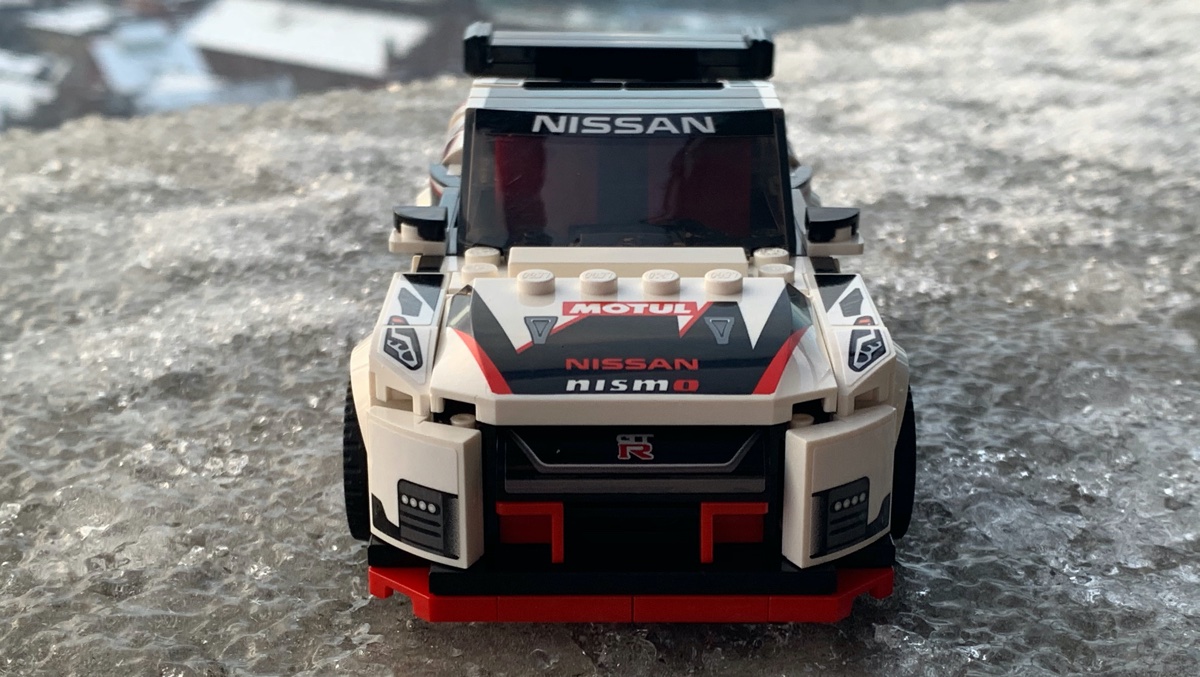 Probably the most awkward angle of this model is front on, as the headlights are pushed onto the top surface of the model and the profile is upright and blocky. The hood decals at least are printed rather than being a sticker - the front grill detail and GT-R badge are great.

This set uses the (by now) usual 2020 8-wide chassis baseplate and axle mounts for the wheels. There are a couple of cool build details, the rear window angle being achieved using a hinge, along with the two front corners mounted on hinges. As is usual at this larger scale we have a built interior. No center console this time, but two red seat headrests, an antenna to form the gearstick and a steering wheel (which you can mount left or right hand drive relatively easily). The windscreen comes un-stickered in this set, which is good news for those of you hoping to build other models - the Nissan sun strip is part of the sticker set included with the set. As with other sets this year there are build details that don't make a lot of difference to the end result, with a engine block below the bonnet and suspension-like features in the build. 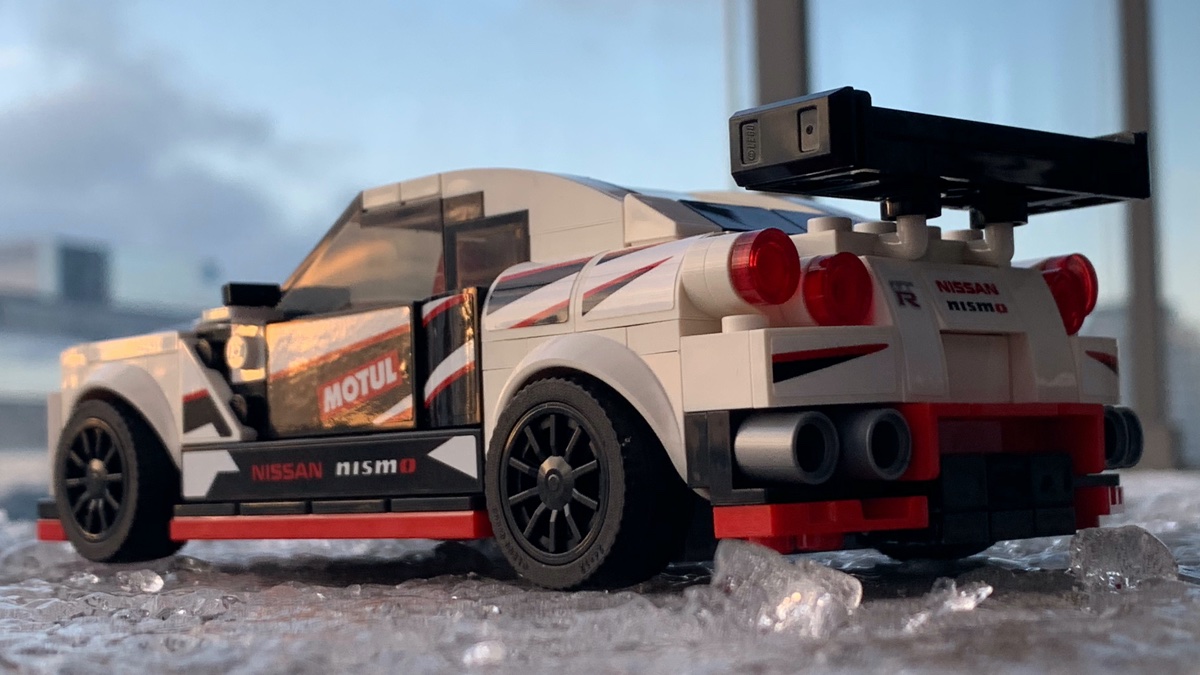 The rear arches of the NISMO GT-R are pretty chunky, and the model overall retains a heft from the real vehicle. The white/black/red colour scheme, between the bricks and stickers, looks great on the model.

Included with the set is a unique minifigure with grey-ish hair and a slightly older appearance which we'd presume is meant to be "Hiroshi Tamura", Mr GT-R, a Nissan executive with over 20 years involved with the Skyline and GT-R, along with the 370Z. Both the car and his fame built heavily based on the Gran Turismo game franchise starting all the way back in 1997 which heavily featured GT-R vehicles and made the Skyline GT-R legendary.

Nissan's video about the fastest drift attempt in the world-record setting GT-R featured in this set.

Design wise this is an interesting model, despite it being quite blocky - the main core of the model is essentially 6 bricks wide and 3 bricks high and completely solid. There's minimal contouring on the sides, but the character line of a GT-R - a diagonal slash/crease behind the front wheel arches has been captured well using a slope mounted on the side. The wing mirrors that have appeared at this new 8 wide scale are present here on the GT-R with a fairly minimal design. The chosen wheel arch design gives the model an aggressive stance from a top down look, although it can look strange from some angles - this seems to be meant to reproduce the race car's wide-arch kit. 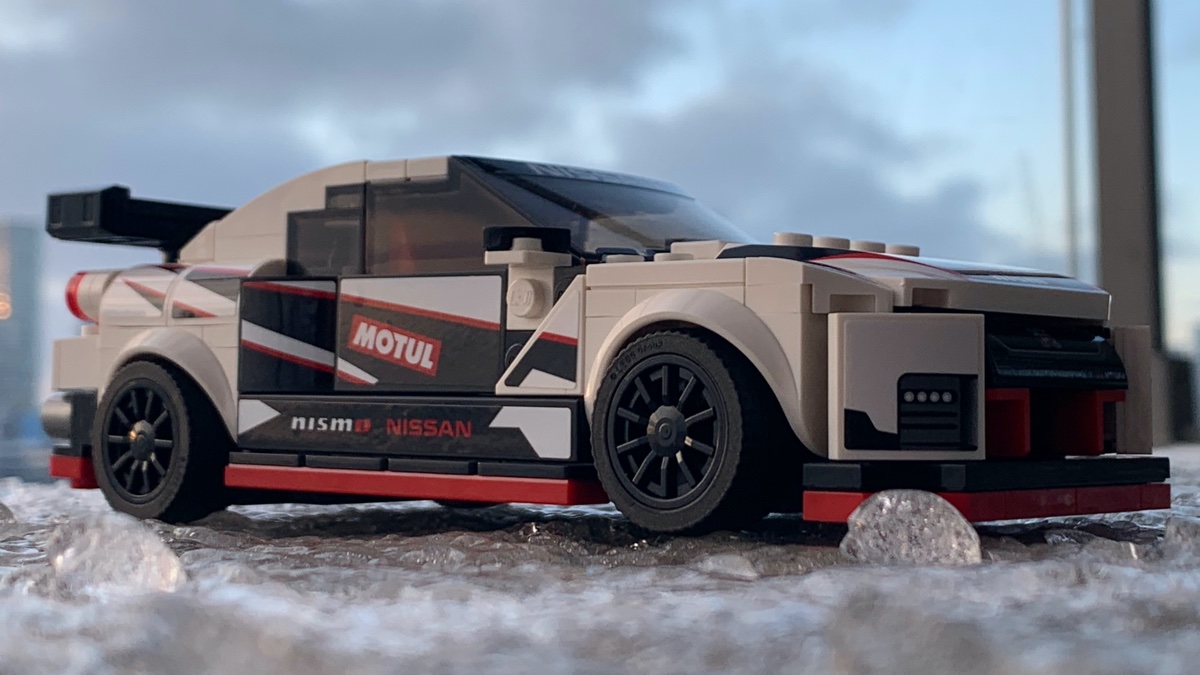 Low and mean at the front, with just the right amount of angles and features to resemble the real life R35 GT-R.

The rear is probably the best looking angle of this model - with a huge rear wing, complete with endplates, mounted on two hooks for that tuner/race car look. The trademark GT-R four round rear lights, arranged at a slight angle have been captured here with some clever build details to put them at an angle. The four huge circular exhausts are present, mounted at different depths which gives the back of the model a sculpted look. There's an intricately designed rear diffuser with red surrounds, black fins and red trim pieces actually mounted upside down underneath the tailpipes. About the only disappointment would be that the front lights couldn't have any built features - both the fog lights and headlights are stickers and it means the front-end lacks built detail.

It's the 50th anniversary of the GT-R this year and this GT-R NISMO edition celebrates that. It's slightly odd to see a drift themed GT-R, as they're known for their advanced four wheel drive systems for grip. The actual car featured in this set (decals and all) was actually used for a Guinness World Record attempt back in March 2016 for the Fastest Drift ever, hitting 304.96 km/h in the process. 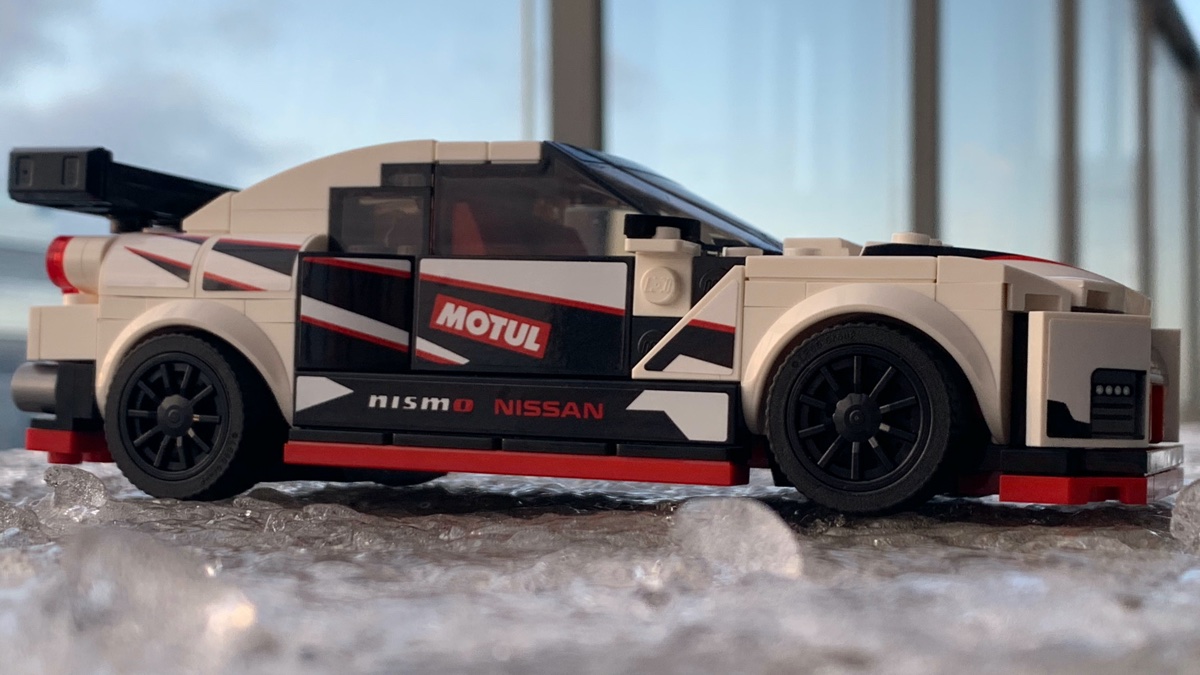 This set really does make the standard Speed Champions wheel set seem small in comparison to the model itself, as the bodywork is so heavy in places. The black wheel trims used don't help matters, blending the tyre and wheel together.

Overall, this is a set that answers a whole bunch of fans out there who wanted to see a JDM entry in the Speed Champions series or had their hearts set on seeing a LEGO version of the legendary Nissan GT-R. As one of the three single car sets this year, alongside the Ferrari F8 Tributo and Audi Quattro S1, there's something for everyone in this first set of 2020 releases.