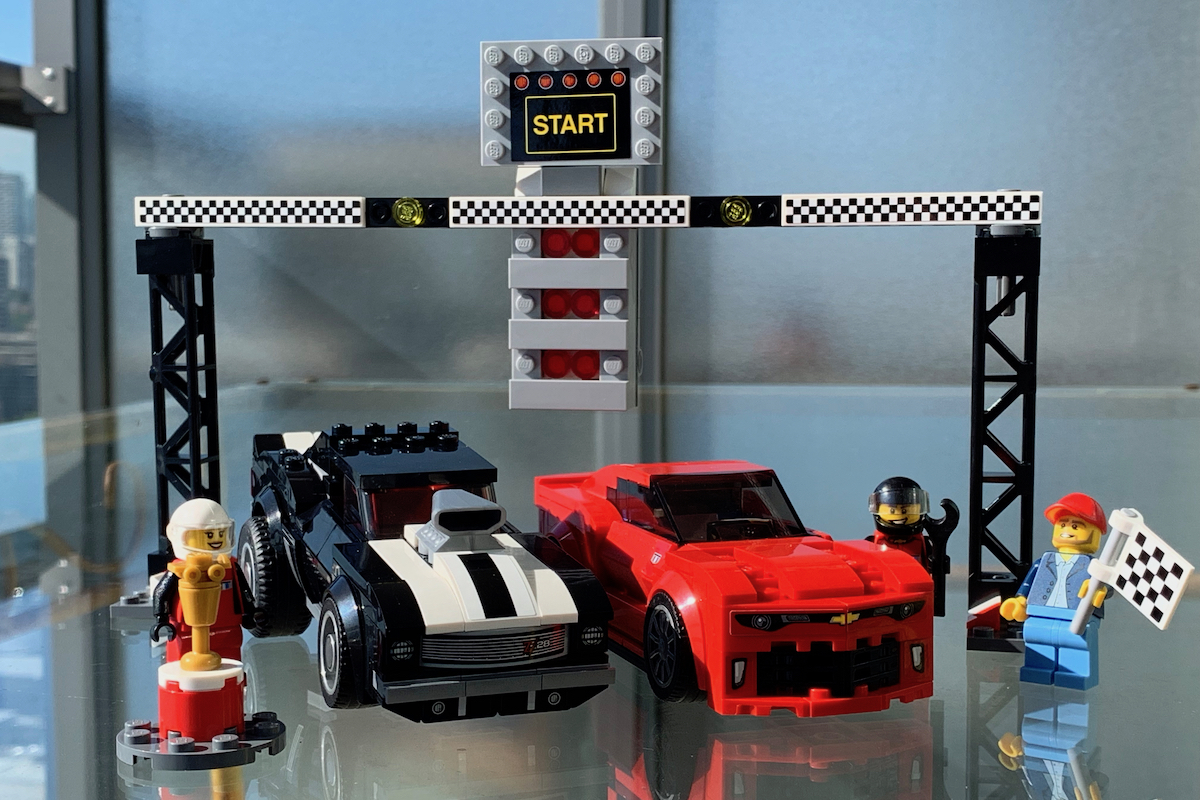 We're back in the world of American Muscle today with today's review of the Chevrolet Camaro Drag Race twin-pack featuring the 1969 Chevrolet Camaro Z/28 and the (then new) 2016 Camaro, in set 75874. With 445 pieces, this is a mid-size set made up of the two Camaro models and a Start/Finish line gantry with lights that can switch from red to green to start your drag races. After Speed Champions' launch year in 2015, LEGO introduced three old car/new car sets in the range: The F-150 Raptor and Model A Hot Rod, Porsche 919 Hybrid/917K and this, the '69 and 2016 Camaro twin pack. Of the three, this was by far the cheapest at $29.99 retail and with the Drag strip theme, would definitely have appealed to the US market, giving the ability to role play a classic vs modern drag strip race. It's notable we also had the Ford Mustang GT in the range for 2016, perhaps indicative of a push to appeal more to the US market than the first wave of exotica from McLaren, Ferrari and Porsche. 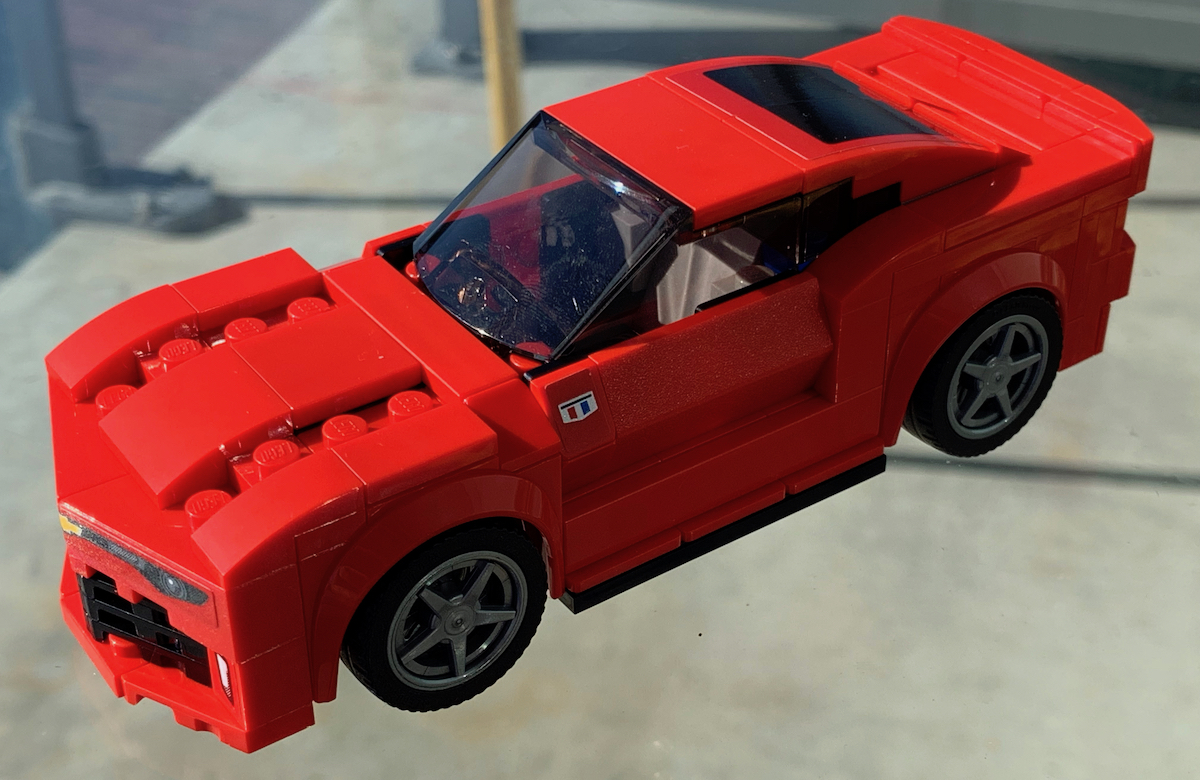 The 2016 Chevrolet Camaro LEGO Speed Champions model, in the original brochure colour of red. This angle really shows off the aggressive hood and sides of the car, using ramps and slopes to create a lot of texture in the body of the model.

It's not hard to see this how this set came about as Chevrolet were keen to promote the (then new) 2016 Camaro, the set being in the red marketing colour used for promotion of the real life vehicle. Let's cover the 2016 Camaro model first. The build for this model reminded us a lot of the Ferrari 458 Italia GT2 model from the previous year - the lower sides of the model effectively attach to mounting plates and create a flat side with a side-skirt like effect toward the bottom. The effect works well here, with a black trim at the bottom creating a good contrast. The front and back of the model rely on stickers for the lights, with a sticker the entire width of the front of the car containing the headlights. The fully stickered black rear window can be a pain to place (we saw the same on the 911 Turbo 3.0). As this is a road car set, the stickering is minimal apart from this, just a Camaro badge on the doors and the tailpipes. 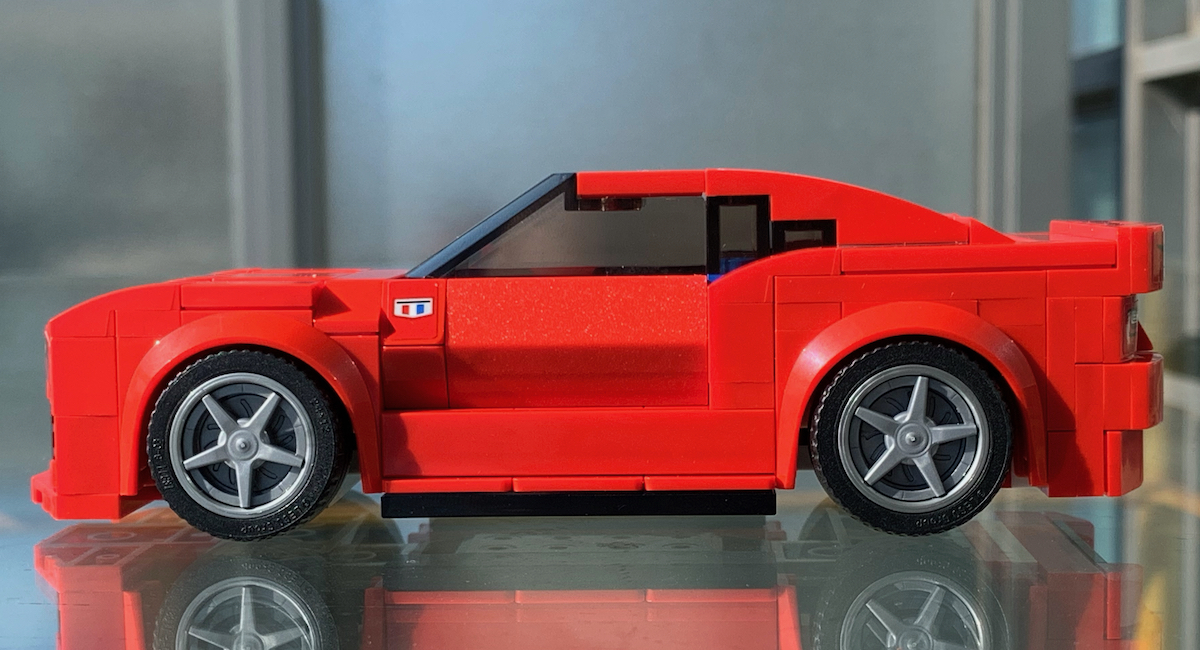 This side profile shows the rakish coupe profile that LEGO managed to incorporate, along with the deeply textured doors and side skirts similar to the earlier Ferrari 458 GT2 model. These five spoke wheel trims also look great on the model.

The model is well designed and not too square, capturing the shape of the real life vehicle, but does suffer from the early Speed Champions sets problem of being quite thick in places - the newer, Chevrolet Camaro ZL1 Race Car set from 2019 is a plate lower than this model in height and looks a lot sportier/aggressive as a result. Two wheel trims are included in a dark grey, a nine spoke and five spoke design, and the model looks good on both of them which can be rare. There's a rear spoiler on the vehicle which is a little blocky, and the use of stickers to try and create a styling line at the back of the car doesn't really work. In an unusual choice of colours there's actually a flash of a white plate visible in the bumper of the car which serves no purpose - whether theis was meant to be a highlight it's not clear but it's unusual to see LEGO's choice of under-body brick colours showing in the finished product. The use of stud gaps on the bottom of pieces to form the front grille is a nice touch and the curved ramps used on the front end give the model an aggressive look.

Showing it's possible to make a Speed Champions model with two good wheel options, here's the 9 spoke option along with a look at the back of the model. The rear lights and Chevrolet badge stickers look good, but the rear spoiler is too chunky - the black line in the stickers doesn't help.

Moving on to the '69 Camaro Z28, the car is in a black and white colourway for a classic look (and almost invoking the Dodge Charger from the Fast & Furious franchise which can't have hurt sales). The model uses very few stickers, in fact the stickers for both models in this set fit on a single sheet. This set is interesting for coming with two versions of the supercharger on the bonnet: a moulded plastic piece for additional realism, or a LEGO brick-built piece which has more character and keeps a more LEGO-y feel to the set. I can't help but think this reflected some indecisiveness about Speed Champions and the balance of realism versus resembling a LEGO set in the line - both versions look good and I think LEGO would probably not include the moulded piece today, having seen the direction they've taken since. 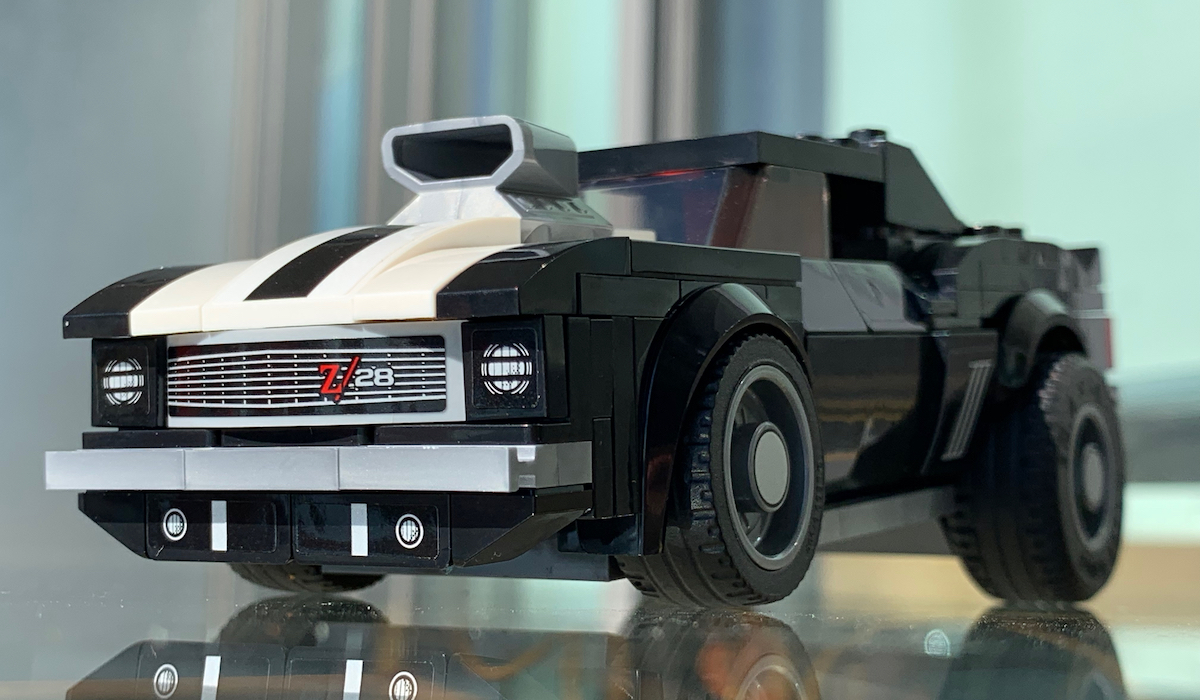 The front end of the '69 Camaro Z28 is low and mean - the stickering almost dissapears to create a realistic looking front end and the model is shown here with the moulded engine block top replicating an air intake.

The '69 Camaro Z/28 model uses two different sets of tyres to get a steeply raked effect to the car, more like a real drag car than a tuned street car - LEGO have also used a 1x1 circular tile to act as a wheel nut which gives the wheels a chunky look. We saw these rear wheels again on the 911 Turbo 3.0 model later on, with very thin tyres for a different look. The effect is also rounded out by two different kinds of wheel arch piece used on the model, something LEGO LEGO didn't reproduce on the later , which gives this model a unique, aggressive look. The black stripe down the middel of the car, made of stickers, is surprisingly forgiving to put on the model as there are lots of angle changes/broken up areas on the car to hide any misalignment. 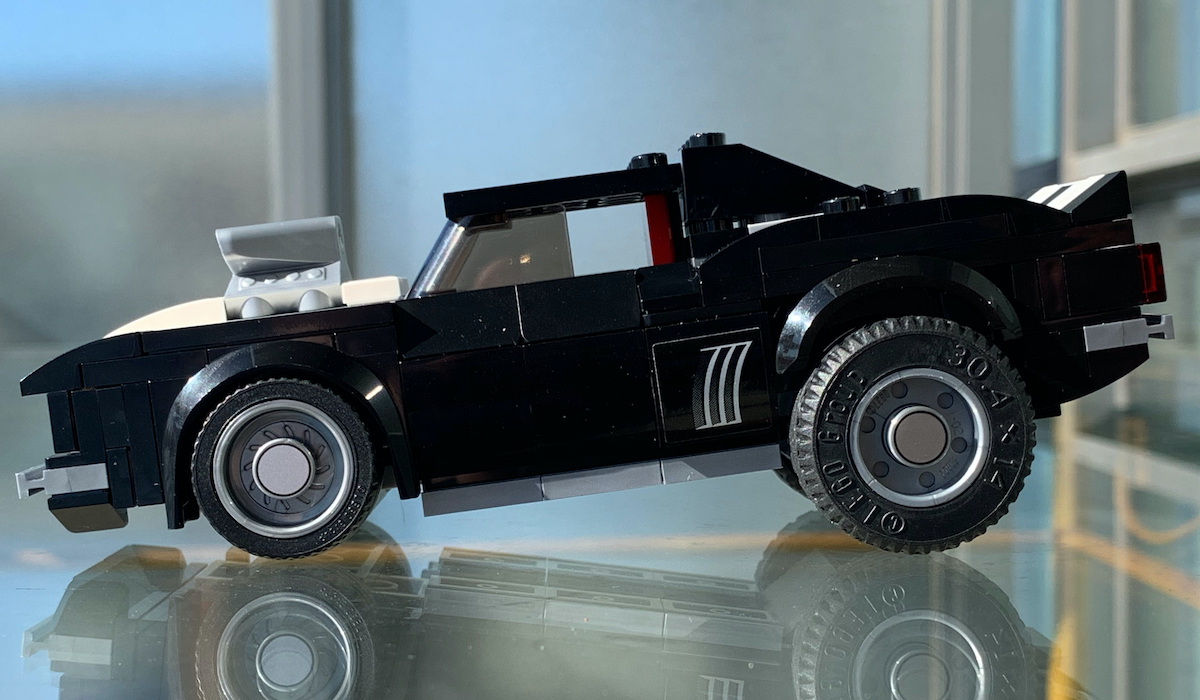 The side profile of the '69 Camaro Z28 shows the lengths the LEGO designers went to to make this a drag car. Completely different tyres and wheels at the back give the model a big rake - lots of slopes used on the model help accentuate the look, it's a great model.

Both vehicles use the technique where a plate is built up, covered in stickers and then mounted to a 90 degree block. The '69 Camaro uses this technique for the front end and the 2016 Camaro uses it for the rear end. The badging on both models is good, and leaves you with two models that definitely have their own character and represent their real life counterparts. The only downside we saw during build was that the front end of the 2016 actually leaves part of the front grille/Chevrolet logo on the sticker sheet - you're definitely meant to leave a gap to get the look right and we could see this bothering some people. 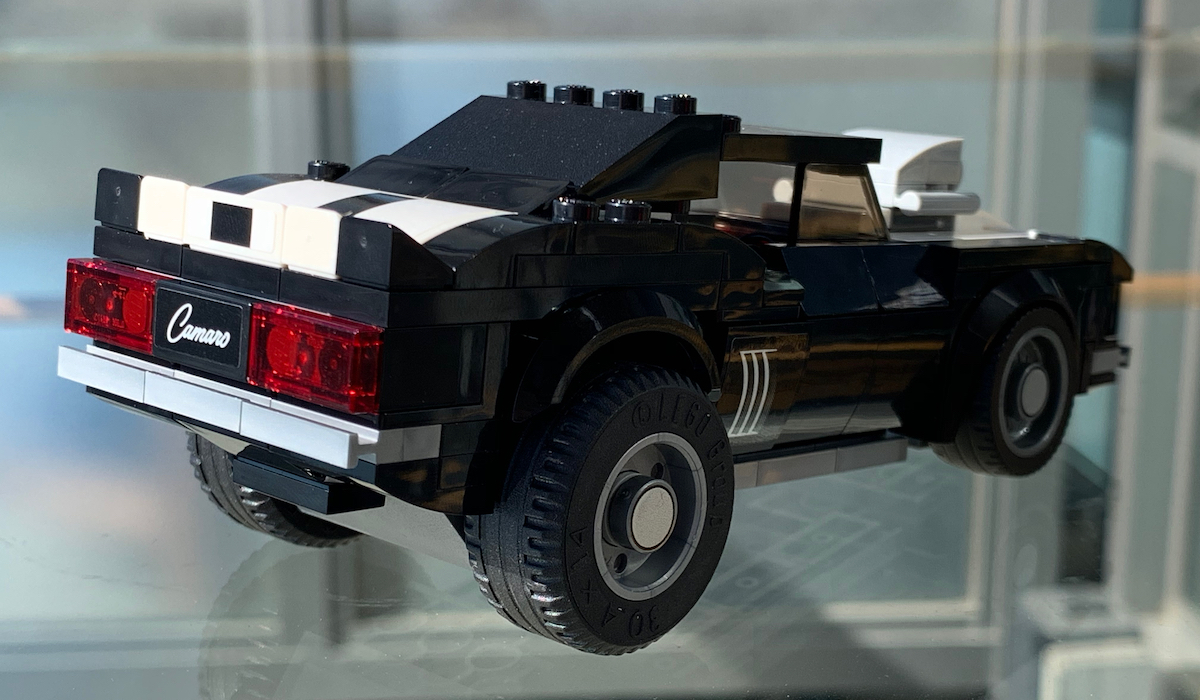 The rear of the Camaro Z/28, basically up in the air thanks to those giant wheels. The minimal stickering on this model, used mainly for the stripe down teh center really gives it a LEGO car look yet it really captures the spirit of the real vehicle.

This was a cheap set new, and the accessories provided are minimal around the two vehicles. Three minifigures come in the set, two drivers minifigs with a male and female head and black and white helmets respectively alongside a race official/'Grand Marshal' character wearing a jacket and baseball cap. This definitely gives the set more of a US feel. Both drivers have Camaro logos on their outfits and the Grand Marshal has a trophy to give away, minimal accessories alongside the included Start line gantry which is generous given the price. The version of a start line gantry we're seeing in this set has more in common with those we've seen in F1 sets rather than the more authentic drag strip 'Christmas Tree' in the 2019 Dodge Charger set

The race official minifigure provided with the set is totally reminiscent of IMSA or NASCAR grand marshals and it's a nice touch.

Overall: 76 (How we rate sets and models)

This is an odd set, unremarkable in many ways (especially when you have as many choices as we do today for Speed Champions American Muscle), but actually great fun to build and good to put on display. The 2016 Camaro particularly looks much worse in pictures than in real life - it's blocky angularity looks good in real life where it can just look unrealistic in pictures. Hopefully some of the angles we've presented here have done it justice. 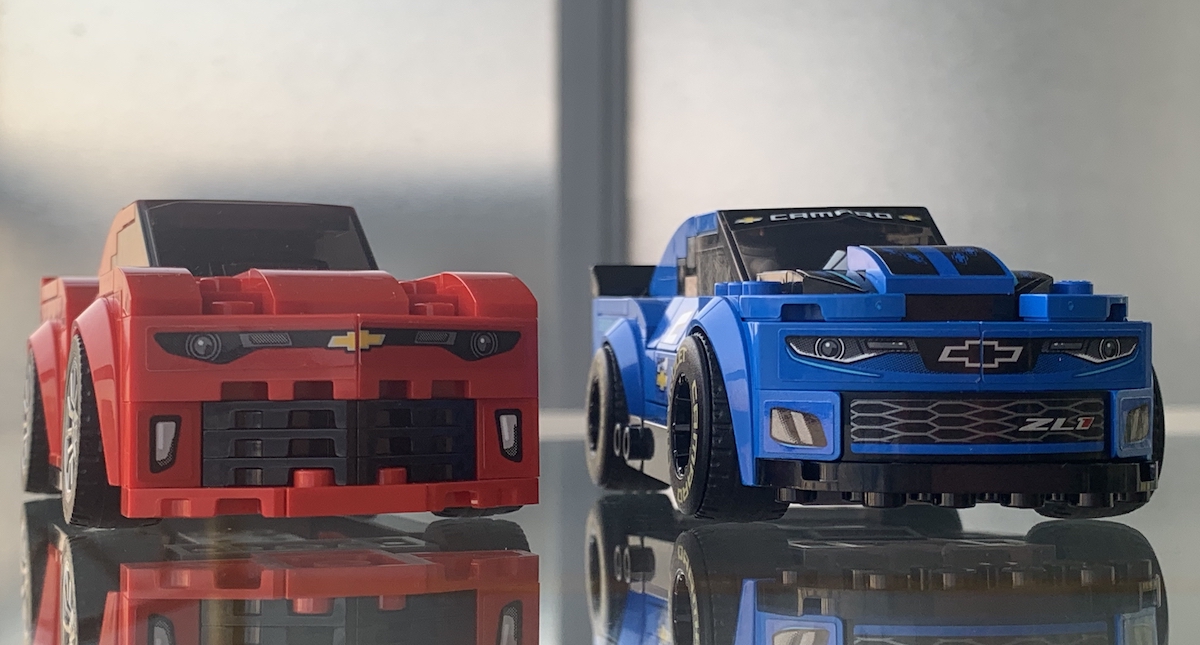 The 2016 Camaro from this set alongside the Speed Champions 2019 Chevrolet Camaro ZL1 race car/NASCAR inspired set. It's interesting to see the same vehicle with a couple of years of development in the line - the 2019 Camaro is a whole plate lower but uses a sticker for a grille.

If you're into this set, but don't feel like scouring the used market for one the current Dodge Challenger SRT and '70 Charger R/T set is very much the same theme with a slightly different set of cars and if you're a Chevy die-hard the NASCAR inspired Chevrolet Camaro ZL1 Race Car is also on store shelves right now. We'd recommend either set and especially the ZL1 Race Car captures a lot of the good parts of the modern Camaro in this set.