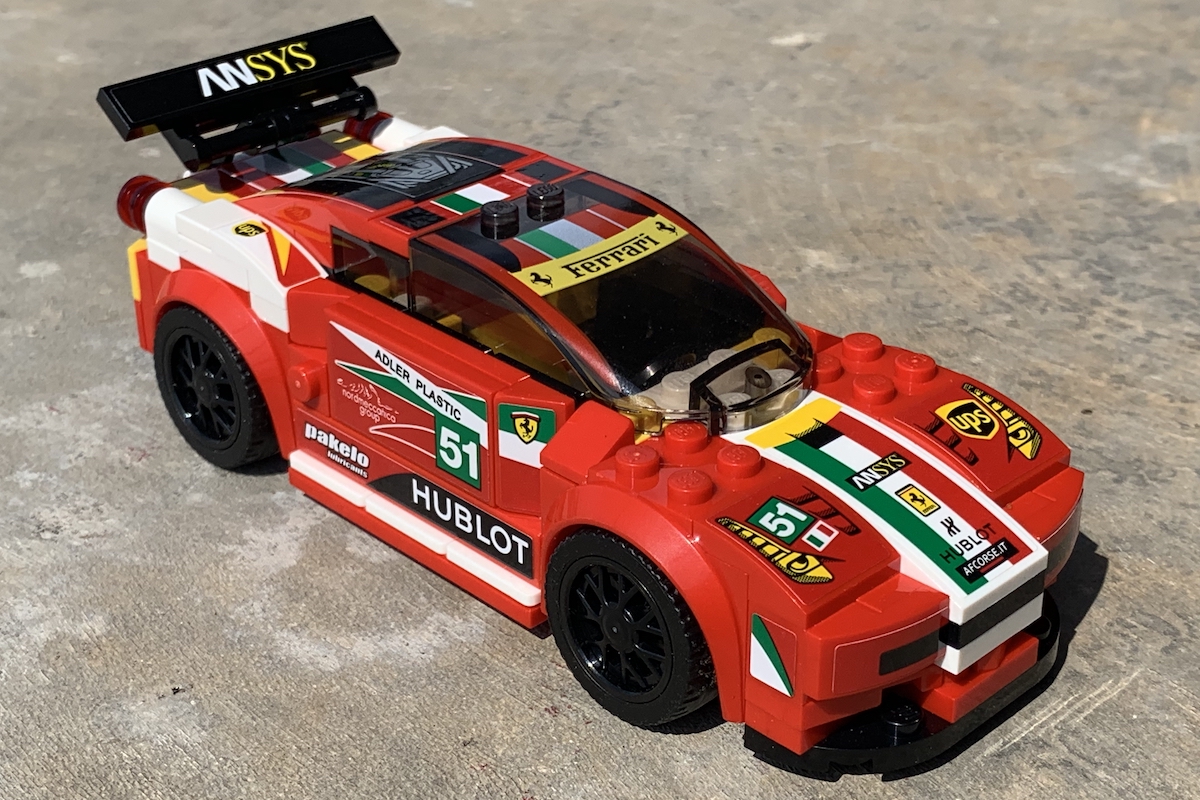 After our recent review of the Ferrari 488 GT3 Scuderia Corsa it only seemed right to complete the set of Ferrari endurance racers by reviewing this set, the Ferrari 458 Italia GT2. Launched as part of the original wave of LEGO Speed Champions sets in 2015, it actually rounded out complete coverage of Ferraris race and road car effort, alongside the LaFerrari and the F14 T & Scuderia Ferrari Truck sets.

These early Speed Champions sets are always an interesting comparison to see where the line started, with blockier shapes and more reliance on stickers to capture details of the cars. The relative chunkiness of this set is obvious when comparing this set to the 2018 equivalent, the 488 GT3 Scuderia Corsa. As Ferrari didn't change the styling of the 458 much to produce the 488 it gives us a look at how LEGO approached the 458/488 shape three years later, with different designers (and a few more slope plates to work with). 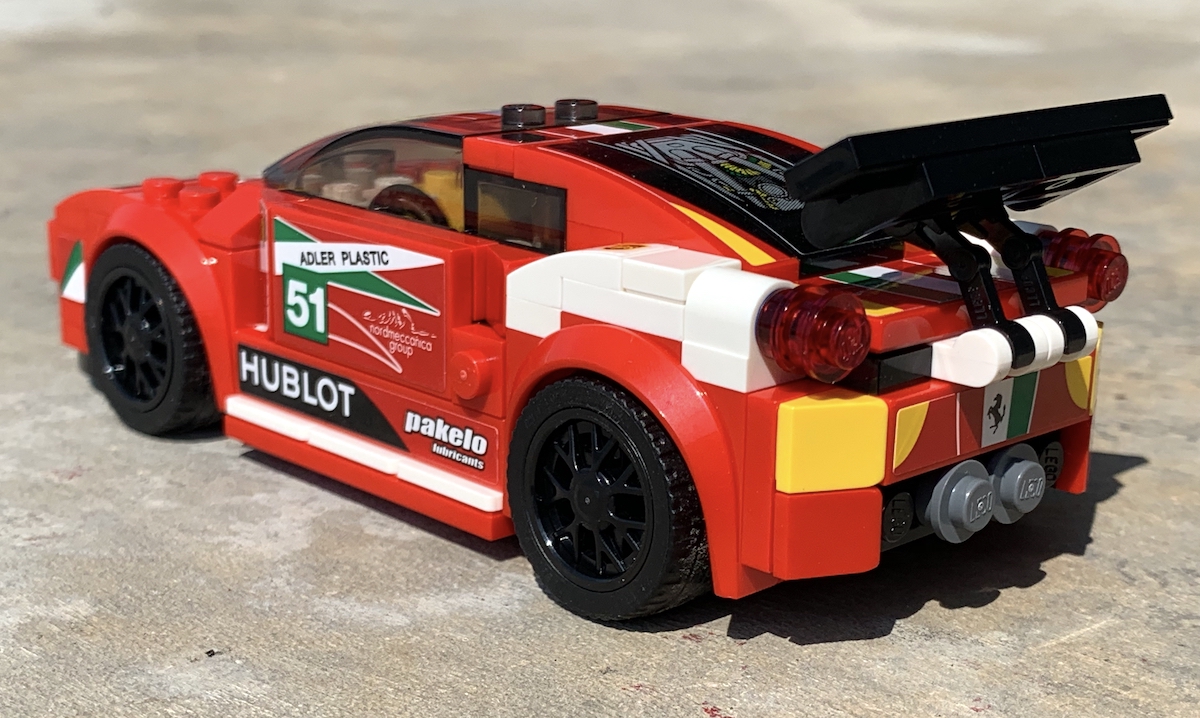 The back of the 458 GT is relatively simple, with two round plates used as tailpipes and a sticker providing the Ferrari prancing horse logo. The yellow slopes used to capture sponsor branding can't really be integrated well with sticker so they look a bit odd here. The rear wing is much smaller than we're used to on Speed Champions GT sets.

AF Corse are a Ferrari factory affiliated race team, so it makes sense that LEGO would choose their livery to feature. It doesn't hurt that the model has a primarily red colour theme to match the other two Ferrari sets and has race winning pedigree in real life. The actual #51 Ferrari 458 Italia GT2 was driven by Giancarlo Fisichella (a former F1 driver), Gianmaria Bruni and Toni Vilander. This car won in the GTE Pro class at Le Mans in 2014. LEGO do tend feature overall class winning cars in the Speed Champions line, as we can see from later models like the Ford GT and later 488 GT3

The car is presented in roughly the livery AF Corse raced it in at Le Mans in 2014, with some sponsors omitted due to lack of space and scale. There was speculation at release that the car was in its 2013 livery, but there was no Hublot sponsorship that year and the yellow details which are present on this model and form the Singha sponsorship were absent. 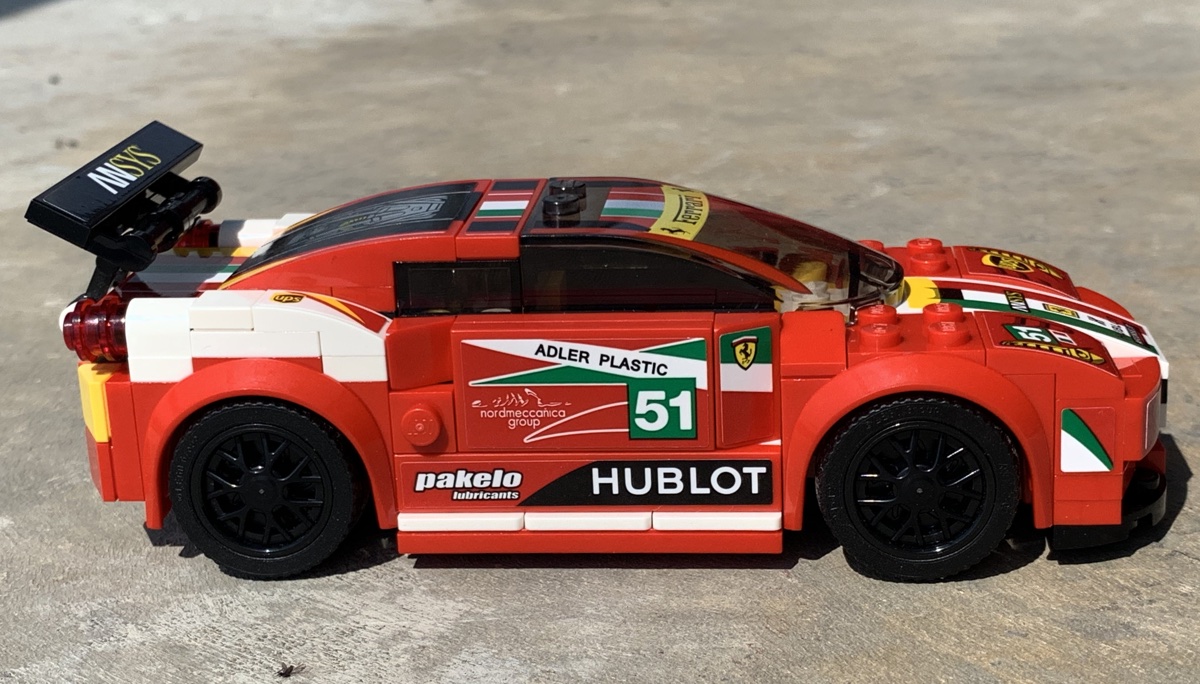 The side profile of the Speed Champions 458 Italia GT2 shows a relative lack of detail compared to modern models. Two flat plates, covered with stickers, make up the majority of the side. The 1x1 plate stuck to the side of the model is a bit odd, only really serving to put a single stud on the side of the model in case you forgot it was LEGO... The Ferrari shields at the start of the door are a nice detail.

No endurance racing set would be complete without some sponsorship (tell that to the later Audi R8 and Audi R18 sets...) The car's livery has an Italian flag stripe down the middle, with white rear fenders featuring UPS branding. The sides feature Hublot, Adler Plastics, Nordmeccanica group and Pakelo Lubricants. It's almost surprising not to see Shell on a Ferrari race car, but with this being a realistic livery it is what it is. We also see Ansys branding on the rear wing (the F488 GTE from the Ferrari Ultimate Garage has the same sponsor double this size!). Overall the model is nicely balanced to look realistic. While I'm not a huge fan of the front end being 3 sloped pieces, the UPS logo integrated into the sticker close to the headlight wouldn't be possible otherwise and along with the air vents I think it gives a nice touch to the front of the model.

A detail on the pieces of this model as you pull it out of the box - the windscreen sun-strip is painted onto the component making the part custom to this set. In later models we're used to seeing these be stickers, and I have to say the painted component does make it reassuring this element of the model will look great even if you don't have a steady hand for stickers. The supplied mini-figure has a tiny AFCorse logo on the overalls on both the front and back alongside Ferrari's prancing horse, matching the race team livery this set is presented in. There are 22 stickers and a lot of them are very conspicuous - you'll get good at placing stickers building this set. 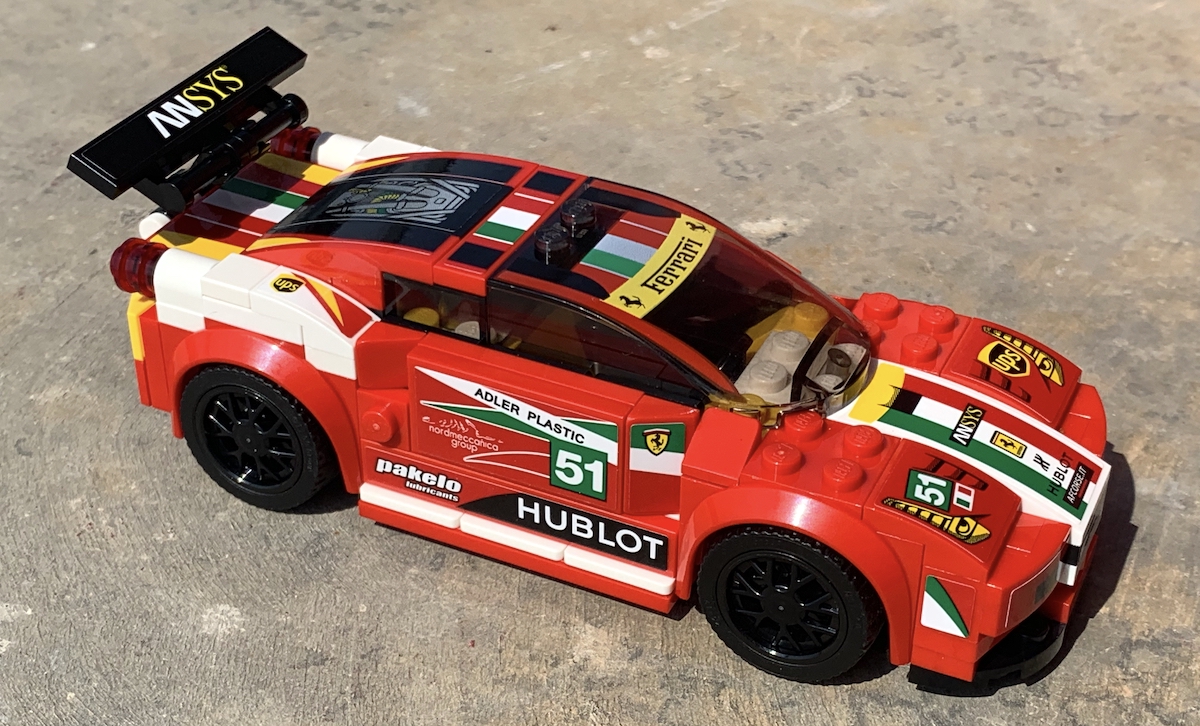 The colour transition through the model is mild, but adds a nice vibe to the model. The white line starting at the sills and working up onto the rear arches by the UPS sponsorship is great. Also super visible from this angle is the Italian flag stripe, running the entire length of the car down the center. The yellow flashes at the back are a bit random, and don't blend very well as the stickers to blend the yellow in are spread out.

With just 153 pieces, this set is relatively light on bricks and this shows in the build experience, mounting a lot of brackets to use plates and tiles for the sides and not really building a solid core/chassis like current builds. The sides of this model don't have a huge amount of aero detailing or sculpture, with a 2x4 flat plate with a sticker on forming the vast majority of the side. These stickers have stripes running through them, so they are quite intolerant of bad placement if you want the finished model to look good. The rear engine cover sticker is really detailed, with various pipes and braces visible through the fake rear window. LEGO simplified this sticker significantly on the later models, but on this relatively low detail model the detailed sticker works well. 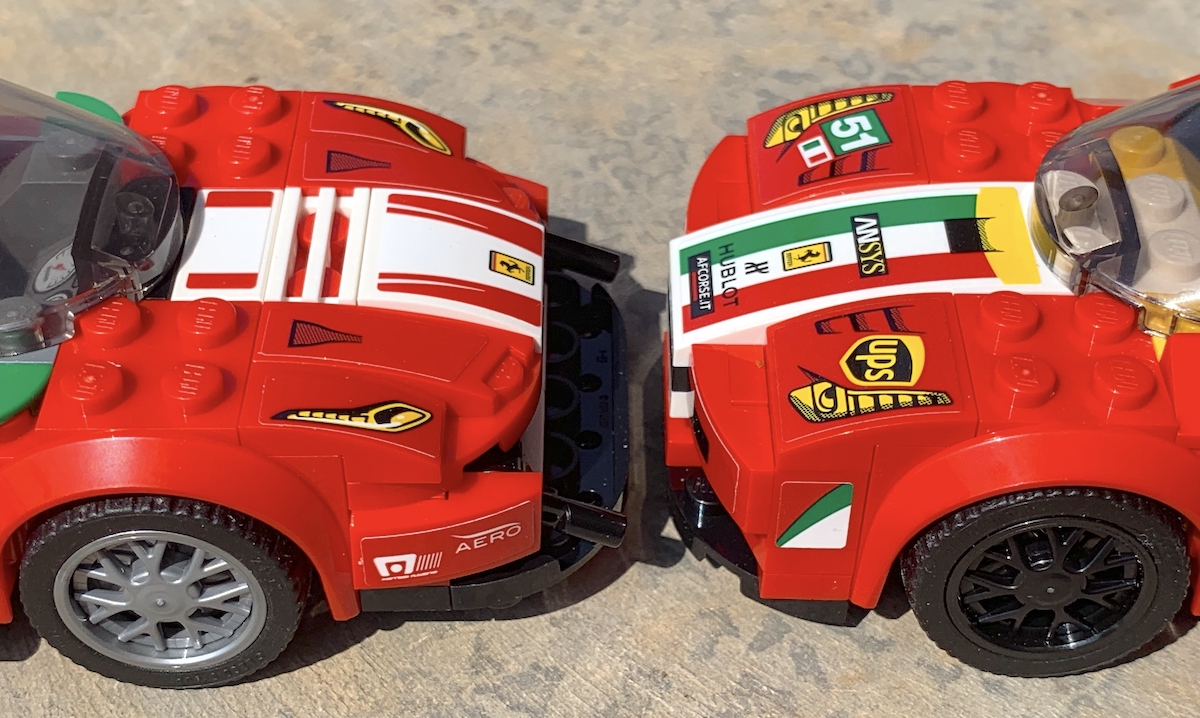 The LEGO Speed Champions Ferrari 458 Italia GT2 face to face with the 2018 488 GT3. The additional use of curved slops is obvious seeing the two cars like this, along with the detail added by having studs sideways (front aero) and even upside down (front splitter).

The back of the model is relatively straightforward - the stripe and yellow details are continued using a sticker for the most part, including a Ferrari prancing horse logo which is a nice touch. I'm not a fan of the exhaust pipes on this model, the round plates used seem like they should be the other way around, and there isn't much depth to the back of the model. The twin rear lights are also slightly odd, using two round pieces each (I actually only used one when building until I looked at the left over pieces) - the way they mount into rounded Technic components provides some shape to the model but it doesn't really match the squared off sides of the car.

I really like the overall colour balance, working in the white and yellow details of the colour scheme in a subtle way toward the back of the car - a white rear arch might have helped the transition, but probably There are some small elements in the build for the builder, like 1x1 round plates being used to represent suspension towers in the model even though they can't be seen once the model is built. The rear wing of the set got beefed up over time, this one is a simple 1x6 tile hinged to the front, no endplates or hidden hinges here like we see on modern GT sets from LEGO. 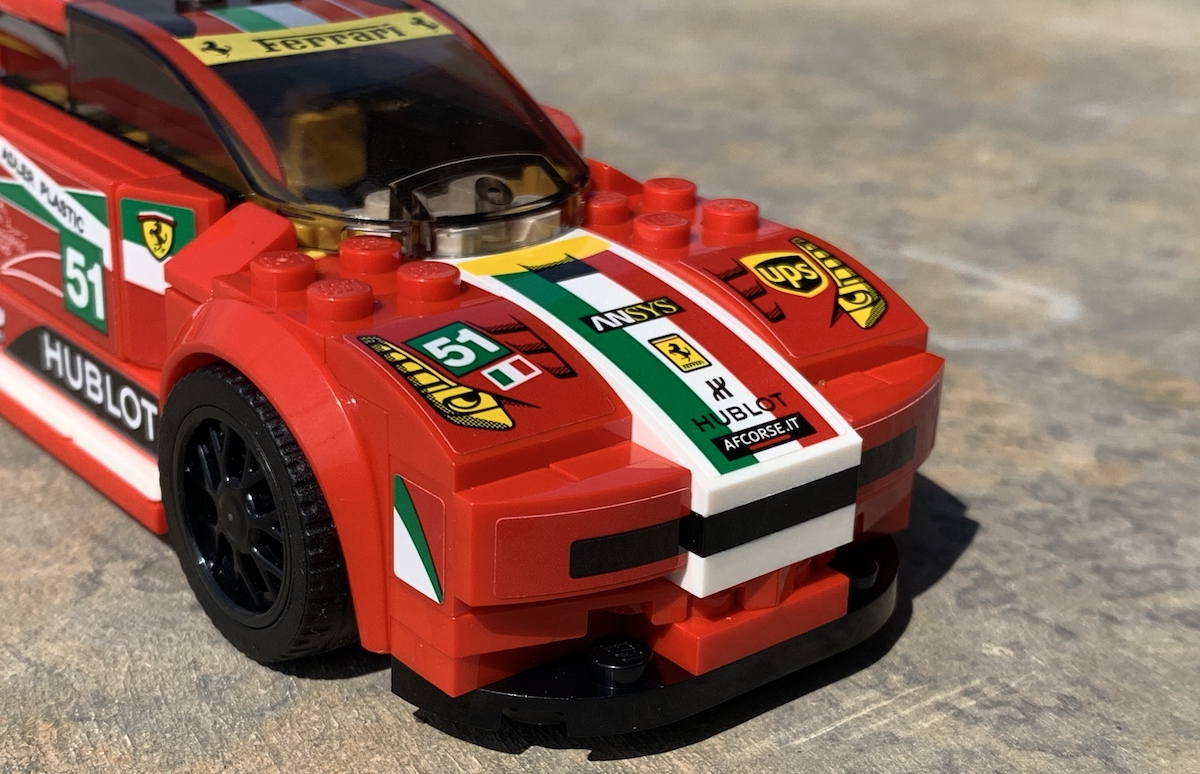 The front end of the 458 Italia GT2 with LEGO using both a black plate (centre) and two stickers adjoining either side of it to create a grille effect (although I wish I'd spaced these out better, as the real car has gaps). The use of stickers to create the look of the front is obvious from this angle, and those black rims only really pop in direct light like this.

This model was the first to come with these motorsports style rims which look great - the only shame is that they're black in this case, so hard to see in anything but direct light. The dark grey version of these rims, supplied on the 488 GT3 is much better and would really improve the look of the model overall. There are no accessories with this set, the only extra pieces in the box being a wrench (to change the wheel covers) and a trophy, which is a plain LEGO moulded version as a single piece - nothing fancy here.

Overall: 56 (How we rate sets and models)

This set is above average, and the scores support that. It's not entirely fair to the set itself, I'm sure if we were rating it in 2015 it would have scored highly (and in fact, was many people's favourite set out of the 2015 release). Given that we've designed our scoring to reward modern day sets that really push what's possible in the 6 stud wide Speed Champions format, it rewards sets that go above the basics - yet that's where the Speed Champions line started out. It's a testament to the success of Speed Champions and the efforts of the designers that the models have only improved from this great starting point. 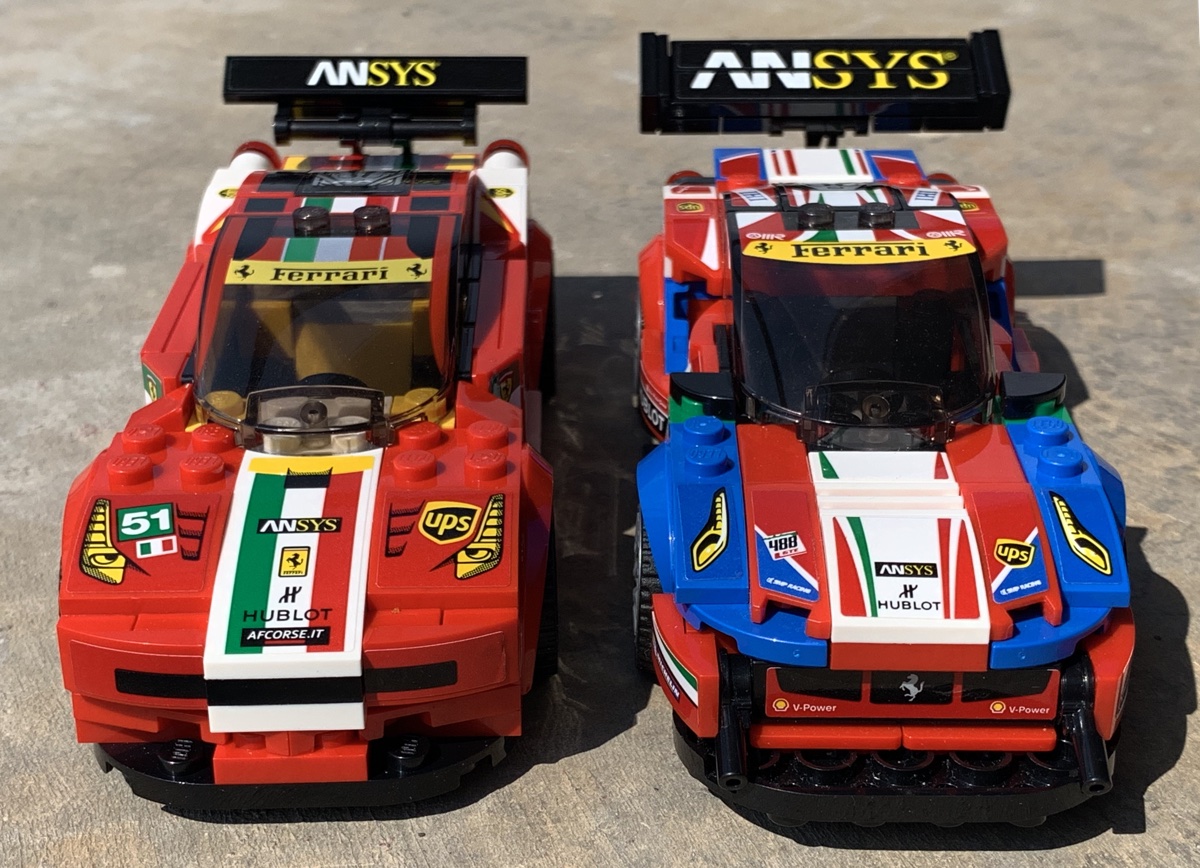 The 2015 LEGO Ferrari 458 Italia GT2 and 2018 Ferrari 488 GTE, both run by AF Corse in Le Mans. The difference a couple of years has made to the Speed Champions line is obvious - with more intricate detailing on the 488 and a more adventurous colour theme in the livery. The front aero design on these models alone is a night and day comparison.

With only a trophy, the accessory score is the lowest - the build is fairly average with not too many hidden details to reward builders and a lot of stickers to get right to make sure the end result looks great. The model has way less visible studs because of all the plates used on the sides, but I was generous with the score thanks to the visible studs prominently on the front and back of the model. Overall, a decent model. It's hard to recommend picking this one up given it's relative rarity and cost in brand new condition (especially with the much superior 488 GT3 on shelves) but it's an important part of the LEGO Speed Champions history.