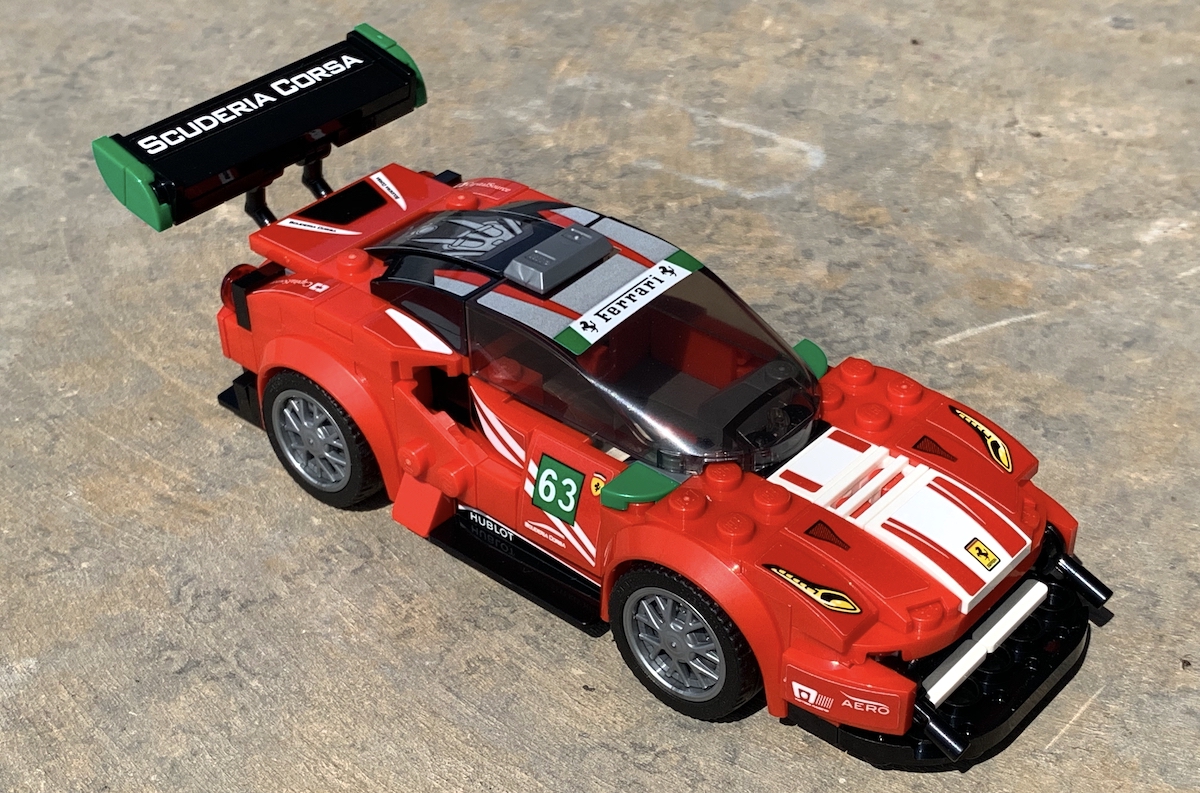 Todays review is of a model which we've actually already reviewed before - the Ferrari 488 GT series. This time, we have the model in GT3 “Scuderia Corsa” specification as opposed to the 488 GTE Le Mans winner found in the recently reviewed Ferrari Ultimate Garage set. LEGO released this individual model as set 75886 alongside the Ultimate Garage last year, giving Ferrari fans a real treat. We've seen plenty of GT cars from LEGO over the years in the Speed Champions line, with plenty of 911 RSRs, the Ford GT and even Ferrari have featured with 2015's release of the Ferrari 458 Italia GT2 in a similar colour scheme to this one (the red, white and green of the Italian flag). 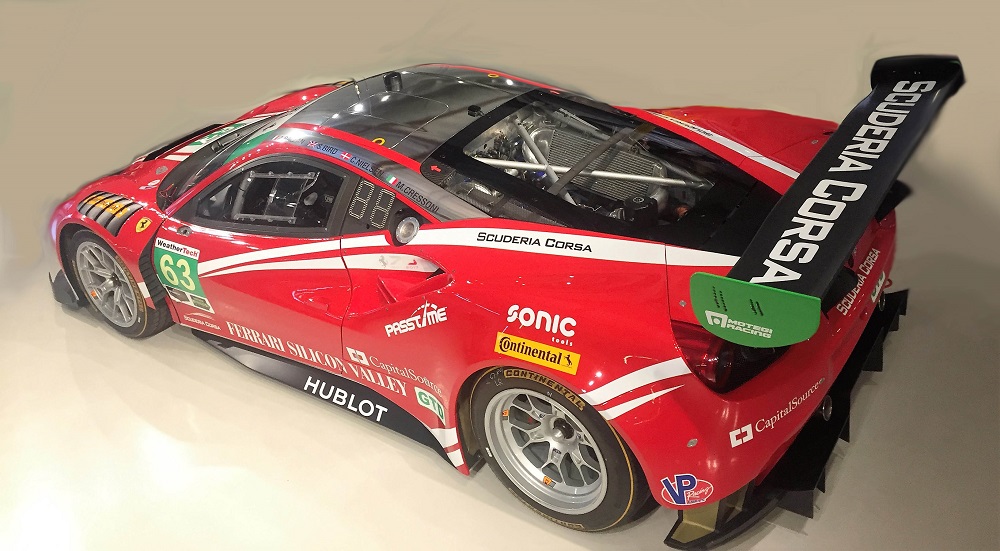 The 2017 Ferrari 488 GT3 Scuderia Corsa livery, matching this set perfectly. Not sure why LEGO didn't use an image of this livery on the box rather than the later, 2018 livery! Image © Scuderia Corsa.

This model wears a livery with the racing number #63, identifying it as the Scuderia Corsa car that won the GT Daytona IMSA championship in 2015, 2016 and 2017. The livery provided on the stickers creates a model that matches the real-life racecar from the 24 Hours of Daytona in 2017. Scuderia Corse used a livery including a blue rear wing with "Ferrari Palm Beach" in 2018, the year this set was released, and oddly this blue wing livery is the picture on the box of the set, rather than the picture we've included above of the car in the correct livery. The drivers in this car were Christina Nielsen, Alessandro Balzan and Sam Bird - the female mini-figure included with the set is actually intended to be Christina Nielsen, who won back to back 2016-7 GT Daytona championships in the IMSA SportsCar series. This set itself was launched in 2018 at Sebring Raceway, in combination with Scuderia Corsa who also had a 1:8 scale 488 build alongside it to show off. 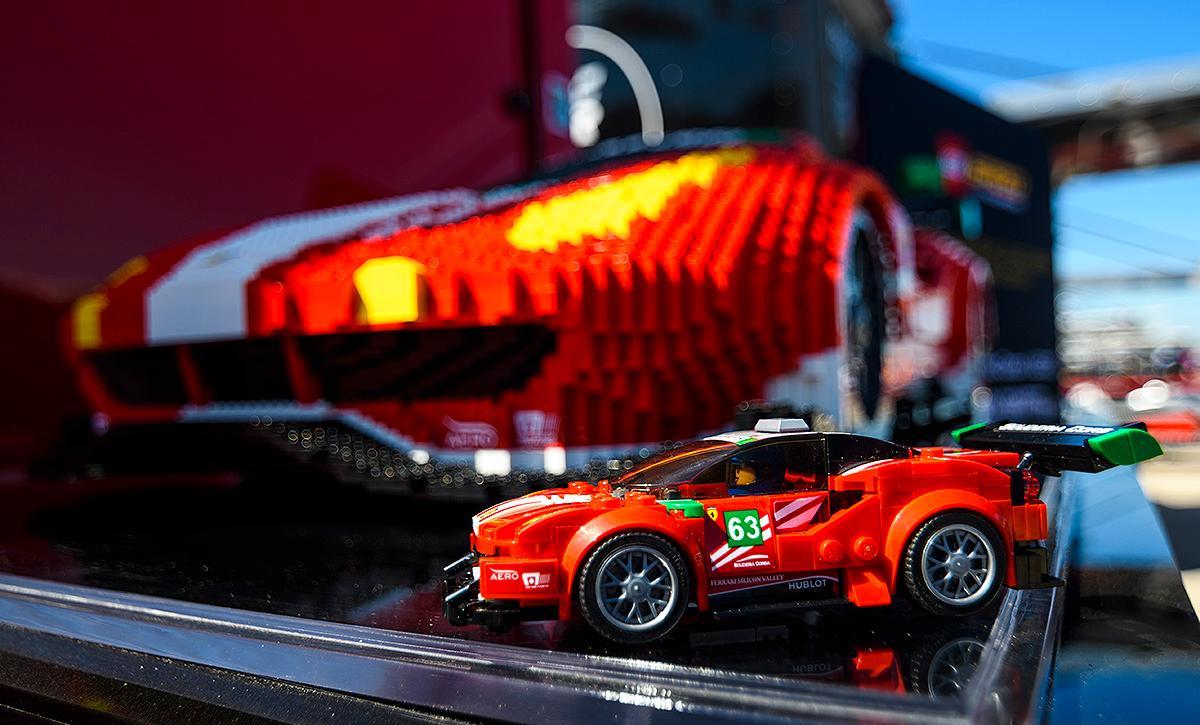 When the set was introduced, Scuderia Corsa gave interviews on what they made of the finished set:

“To partner with Ferrari and The LEGO Group on its 60th anniversary and bring our No. 63 to life is a dream project,” said Scuderia Corsa team owner Giacomo Mattioli. “We’ve had outstanding results with the No.63 Scuderia Corsa Ferrari 488 GT3 the past five years, and the LEGO Speed Champions set is a powerful way to tell our story, hopefully inspiring the race drivers, engineers, and designers of the future.”

“I cannot believe it is becoming real,” Nielsen said. “I still think it’s unreal. I need to get one myself, I haven’t got one yet, or two, or three, or four, but yeah, it’s absolutely amazing. My life feels 99 percent complete. The last percent is I need to have a Porsche in LEGO as well.” 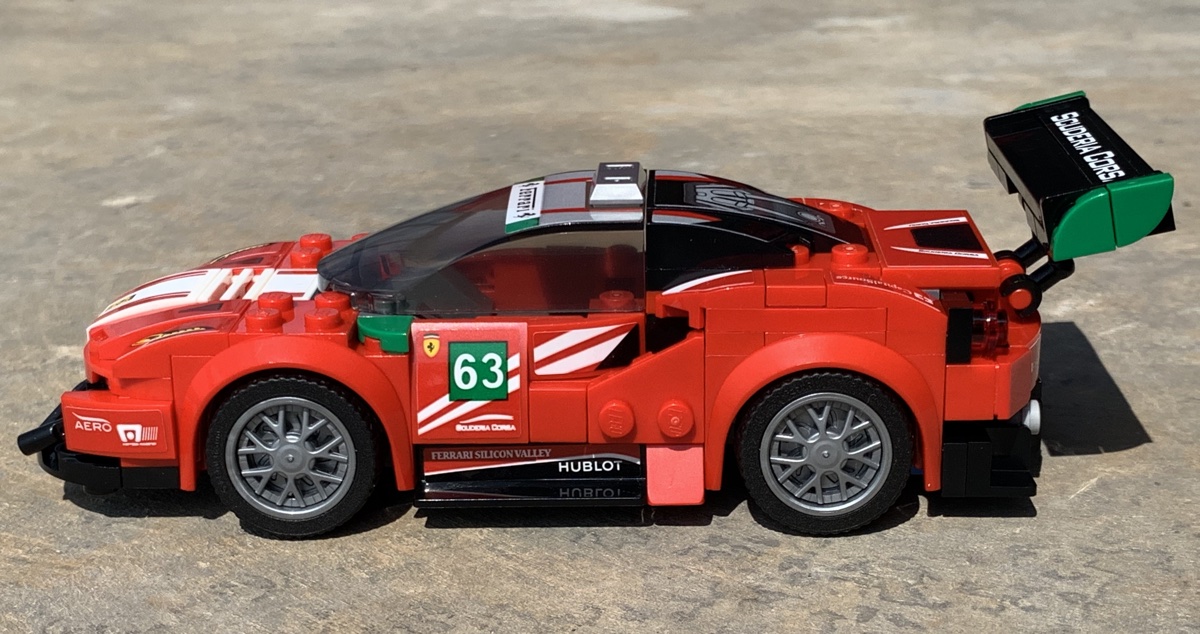 The side profile of the LEGO Ferrari 488 GT3 "Scuderia Corsa". The side aero on this model is a bit different to the 488 GTE and I like how the rounded plates representing wing mirrors sit lower. The Italian themed Red/White/Green livery looks excellent on the model.

So let's take a look at the actual LEGO model. With 179 pieces the set has a relatively low piece count compared to newer, more complex models (the McLaren Senna springs to mind there, with almost 220 pieces). The vast majority of the model is in red, with just wing endplates and the wing mirrors in green for highlights and a black roof. They've done a good job of capturing the side intakes from the real-life 488 GT car in the model, with the door area sloping backward to accomodate the vent. Oddly, while the 488 GTE model has a textured, radiator like area tucked into the gap, this model just has a flat surface - I wonder if LEGO wanted to keep back some details, or if the designer of the Ultimate Garage set added a touch or two. 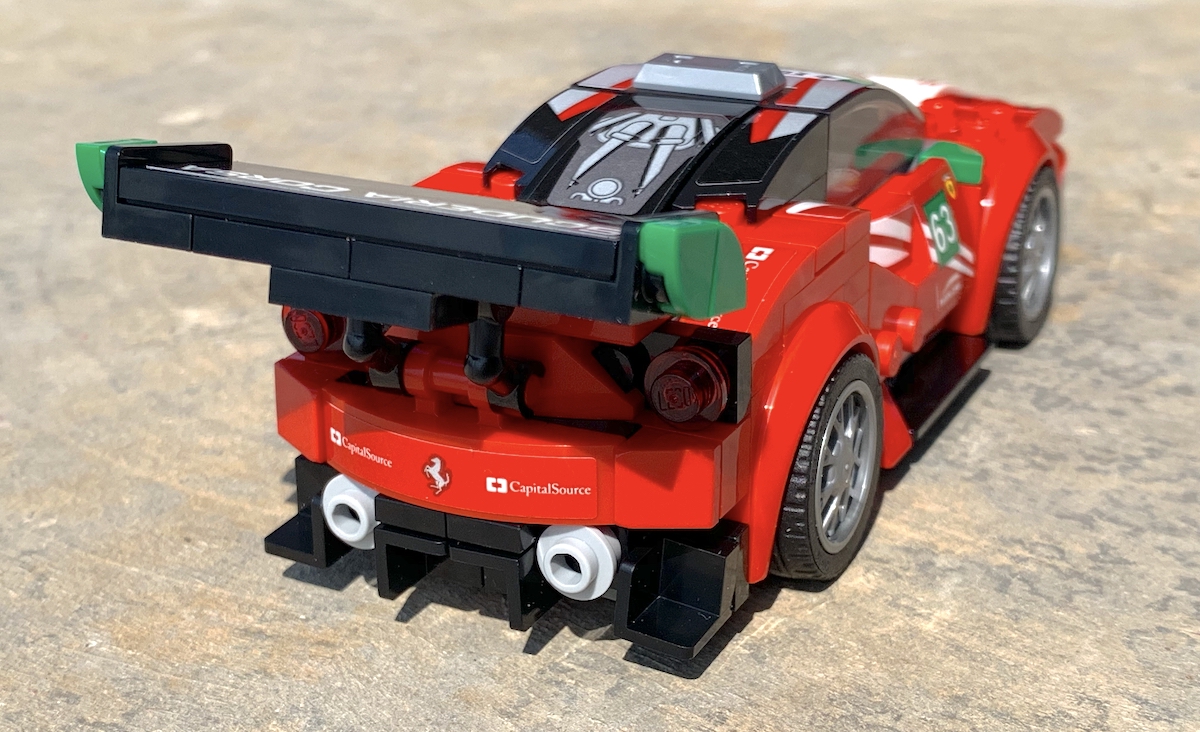 The rear diffuser of the Speed Champions 488 GT3 is detailed, with lots of corners making up aero devices and two tailpipes sticking between. As this model doesn't have multiple colours through the bodywork, it can use a full width sticker to give us a Ferrari prancing horse badge at the back. Sponsorship is mild, but enough to make the point this is a GT racer.

The rear wing endplates use two curved tiles back to back, to give them an aero effect that's different to the usual spoilers we've seen on LEGO GT cars. It's a great feature and I'd like to see similar efforts in the future. I almost wonder if LEGO couldn't fit an additional sticker on the sheet for this model, as the front end has a black 1x4 flat area which would be perfect for some grille detail and a Ferrari badge (like on the 488 GTE) - the model doesn't suffer too badly for it but it would improve the set. I'm surprised LEGO didn't use flat 1x1 round red transparent tiles rather than the usual 1x1 plates as lights, the 488 has very flat lights and I think it would have helped the realism of both models.

The sponsorship is relatively light on this model, just like the real world vehicle - Ferrari Beverly Hills, Hublot and Capital Source being the main sponsorships present. The headlight detail is stickered yellow, accurate for endurance racing and the plate that makes up the splitter actually mounts upside down, which gives the front of the model a cool look. Some of the stickers on this model can be a pain to install, as the stripes on the door line up between the number panel and the intake. The windscreen sunstrip and roof graphics are also stickers, which are important to get straight as they're very visible in the finished model. Generally though, as a lot of stickers are red on red, there's some tolerance for stickers that aren't quite straight. 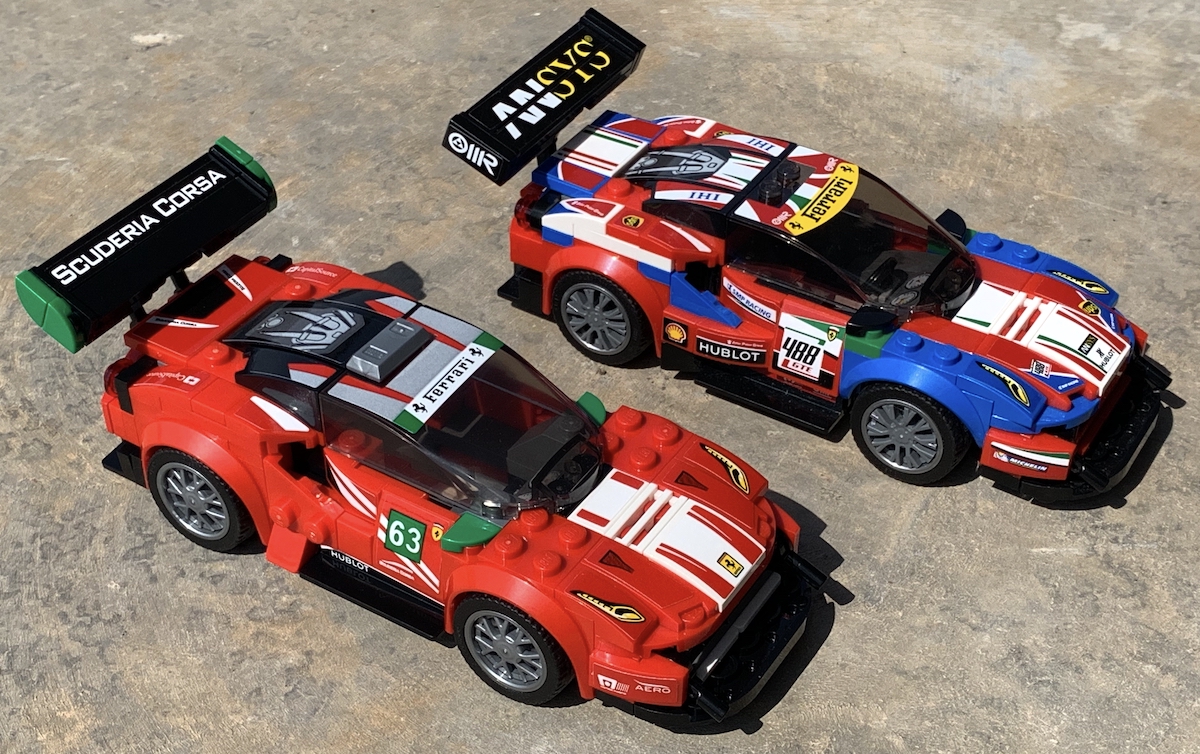 The Speed Champions Ferrari 488 GT3 and GTE (from the Ultimate Garage), together. A close look at the sides of the car, and the wing endplates shows these aren't exactly the same model. LEGO had to change quite a few body pieces to work the Red/White/Blue colour scheme of the GTE car into the model and I think the GT3 ends up looking better.

The diffuser includes two exhaust pipes, making it different to the 488 GTE and a more straightforward back end in general, since the car isn't trying to accommodate multiple colours in this area. The car has a nice Ferrari prancing horse logo right in the middle of the rear bumper, which gives it a cool look.

Other small differences from the 488 GTE set are the wing mirrors being mounted lower, the windscreen being clear instead of tinted and a small vent being added to the top of the roof. The aero is slightly different, with various slopes on the side of the car pointing in different directions, these representative the changes between the Ferrari GT3 and GTE cars in real life. LEGO had to use smaller pieces in many places on the GTE model to change colours or incorporate stripes and features - this plain red 488 body lets them use larger pieces and I think the overall shape of the model is better off for it. Even the rear wing hinges differently, with a central hinge on the GTE and two spaced hinges on the 488 GT3. 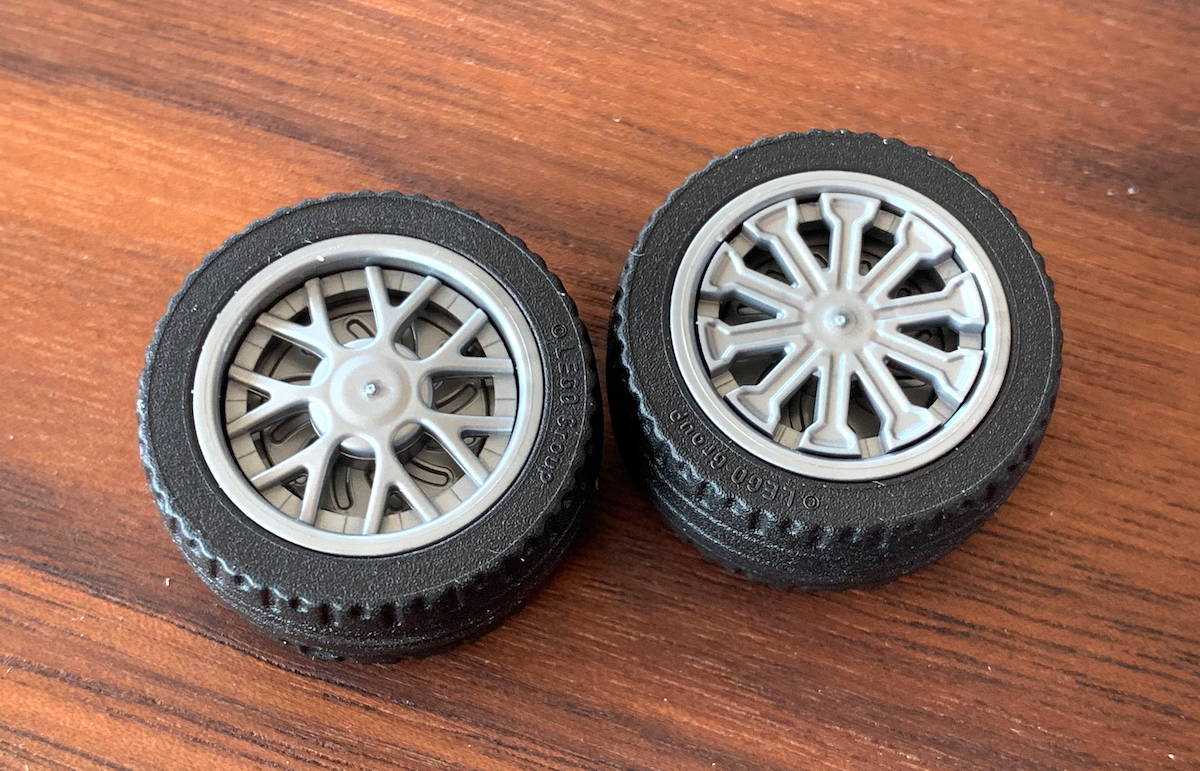 The two rim styles supplied in the box with the Speed Champions Ferrari 488 GT3. To my eye, only the rims on the right look good at all, showing the brake-disc effect printed on the wheel and having a dished effect. The others look like a wheel design from the Porsche 918 Spyder with an unfortunate resemblance.

One of the sets of rims included with this set looks really bad on the model, it's a 10 spoke very covered design - the others are perfect, a motorsport inspired/BBS style look that show off the brake discs printed on the wheels. These motorsport style wheels were introduced on the Ferrari 458 Italia GT2 so it only seems appropriate they're at home on this model, and the grey provides a great contrast with the rest of the model and the tyres. I wish LEGO would provide these latter rims on all GT car sets as these are exactly the kinds of rims you see.

As with all of these GT models, the rear wing can break off relatively easily. You'll want to have a keen eye when putting it back - rather than going in the obvious 1x2 plate hole in the wing, it actually attaches to the back, with that hollow used to allow the hinge point of the rear wing to hide underneath. I didn't realise this initially and wondered why the rear wing of my model looked like it was hanging off! 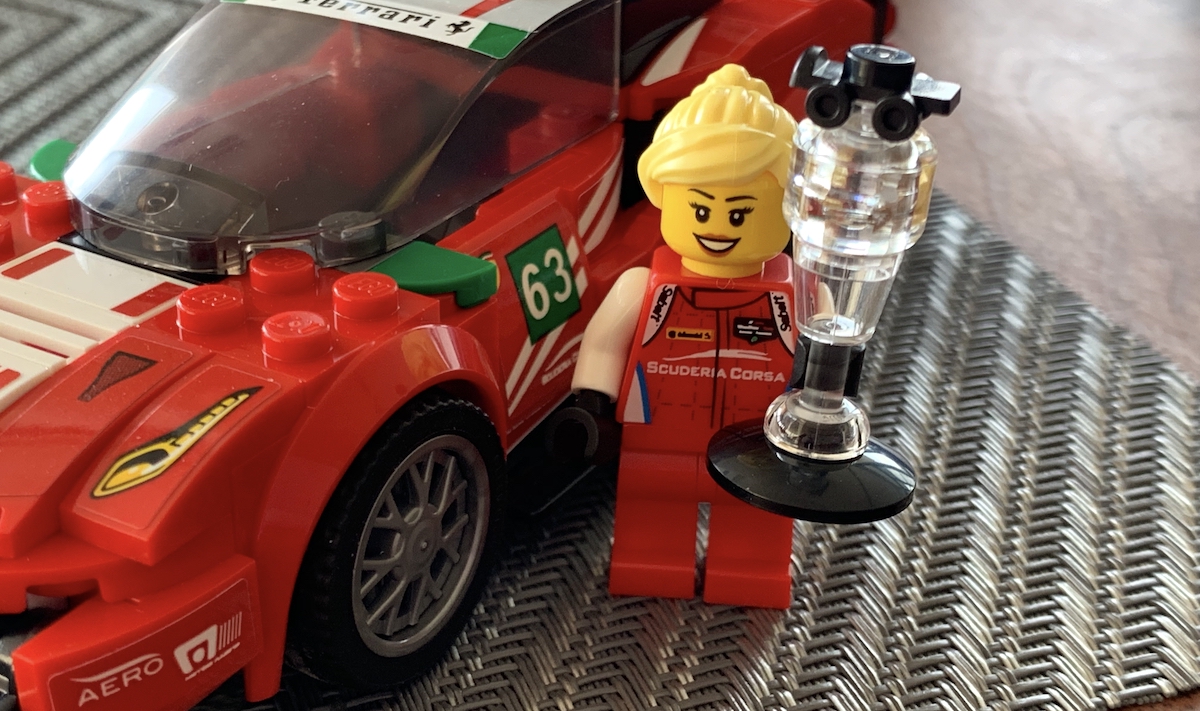 This blonde minifigure represents Christina Nielsen, back to back GT Daytona winner in the IMSA Sportscar series and driver of the #69 Scuderia Corsa Ferrari 488 GT3 in period, back in 2017. The trophy uses a clear minifigure head on top of a cup, which is slightly weird...

The woman minifig provided with the set has a trophy which cleverly composed of a transparent lego cup, a transparent minifig head (!) and a base plate aloing with a small component that looks like a car. The details are really cool and a step up from the LEGO standard single piece moulded trophy, while not as impressive as the LeMans effort incldued with the Ford GT set or the F1 World Championsship style trophy included with the Ultimate Garage. Another nice touch are the race suit graphics - there's a tiny Continental tire logo along with the black IMSA WeatherTech series logo on the front - something I'd almost missed on first review of this set.

An interesting final note, the rear engine graphics are actually different between the 488 GT3 and GTE, with the GT3 model here having less detail but a similar overall shape. The older, 2015 model 458 Italia GT2 actually has a much more detailed engine bay graphic that adds detail (most likely to make up for the lack of build details in the model itself).

Overall: 68 (How we rate sets and models) 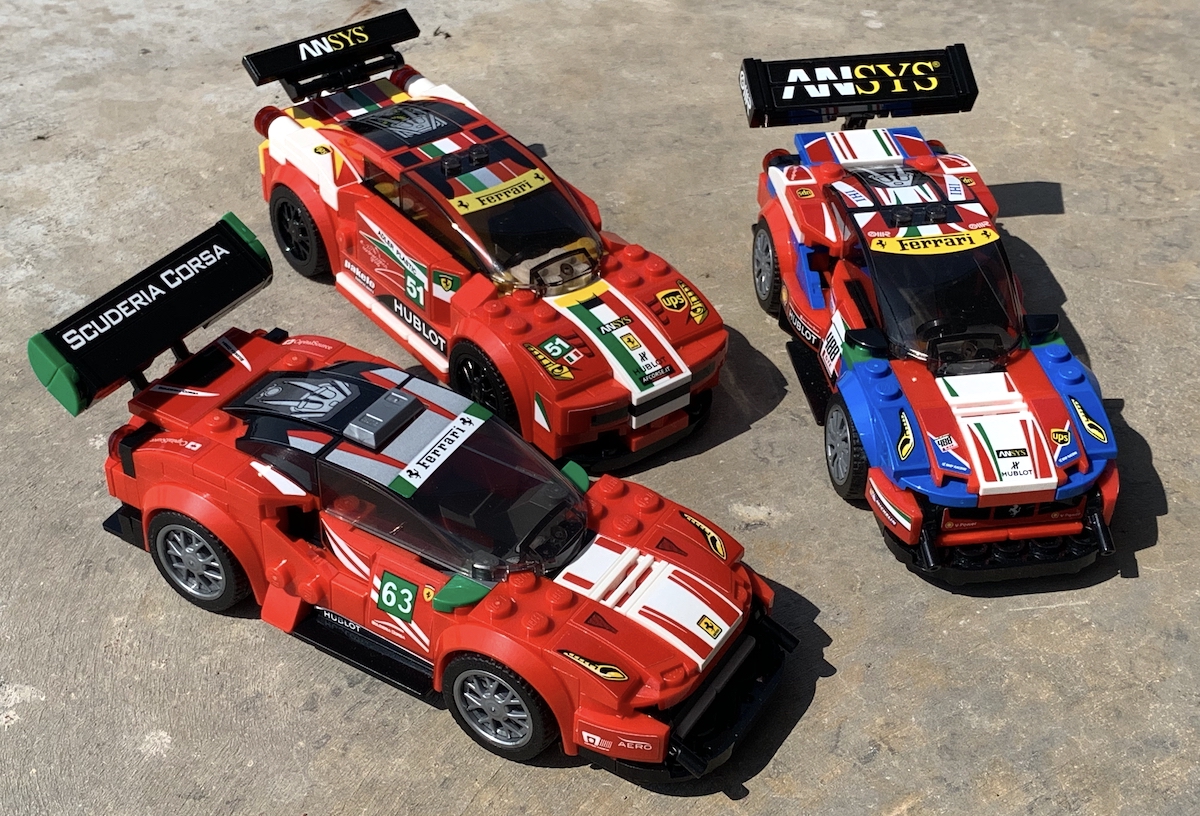 The scoring for this model comes out well, it has a nice balance of studs left over on the model once built to give it that LEGO feel, and enough little details to make it interesting. It did lose a detail point for leaving out the radiator detail that the 488 GTE includes - I think packing these models with detail given their historic significance really doesn't carry a downside and the piece count had plenty of room given the relative simplicity of the single colour bodywork. Accessories aren't really a part of the set, but the trophy included is quite neat so the model scored points there.

Overall, I'd recommend this model highly, especially if you're not that interested in the rest of the vehicles in the Ferrari Ultimate Garage set and are unlikely to buy that. It's a more traditional Ferrari livery for a race car, and has enough cool details on it to make it interesting to build and look at - the Blue/White/Red SMP Racing livery of the 488 GTE is a less traditional Ferrari colour scheme. If you made me choose between this set and the 488 GTE, I think I'd take this GT3 Scuderia Corsa for its classic livery and combination of shape and rims.