Ferrari, one of the most legendary motor car manufacturers of all time, with some of the most rabid fans - the ‘Tifosi’. Given this, you have to think that LEGO were bold in bringing out the "Ultimate" Ferrari Garage. If you asked me to pick three of Ferrari's cars to feature here, I'd struggle badly with what to leave out.

Today, we're looking at LEGO's choices as we review the 841 piece set 75889 and see if it can maintain the legacy of awesome Ferrari LEGO sets. We're going to start by looking at the car models included in this set in turn. 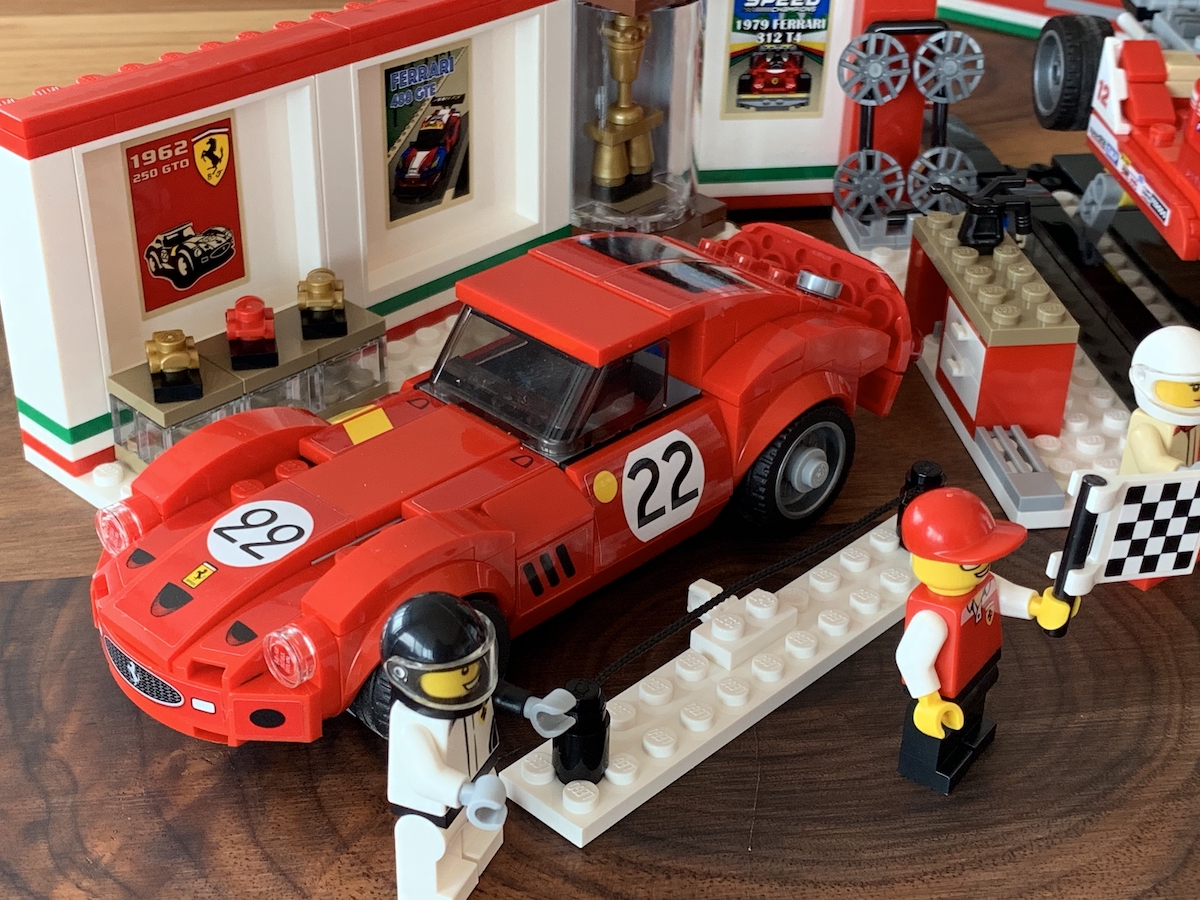 The 250 GTO numbered 22 with it's roped off fence in front of Ferrari's trophy cabinet. The poster stickers that go on the garage walls of this set are amazing by themselves.

The 250 GTO was a safe bet for LEGO in this set. The most valuable Ferrari road car, going for upwards of £10 million at auctions, was always going to be an iconic car to feature. To pair with the racing theme of this set, including a pit garage and some track segments, the car is presented in a racing livery. Luckily the livery is relatively mild, with few stickers and lets the sculpting of the model itself do the work.

The model comes with stickers for the race number of the car it is based on, No. 22 which is owned by Pink Floyd drummer Nick Mason - this exact car is worth around 50 million GBP (yes, you read that correctly) in real life. I really enjoyed building this car, it’s based on the usual black chassis piece for a Speed Champions set, but quickly deviates from there. Particularly, building the slanted back of the car up and clipping it on to the back is novel and gives the model a unique look matching the real thing. 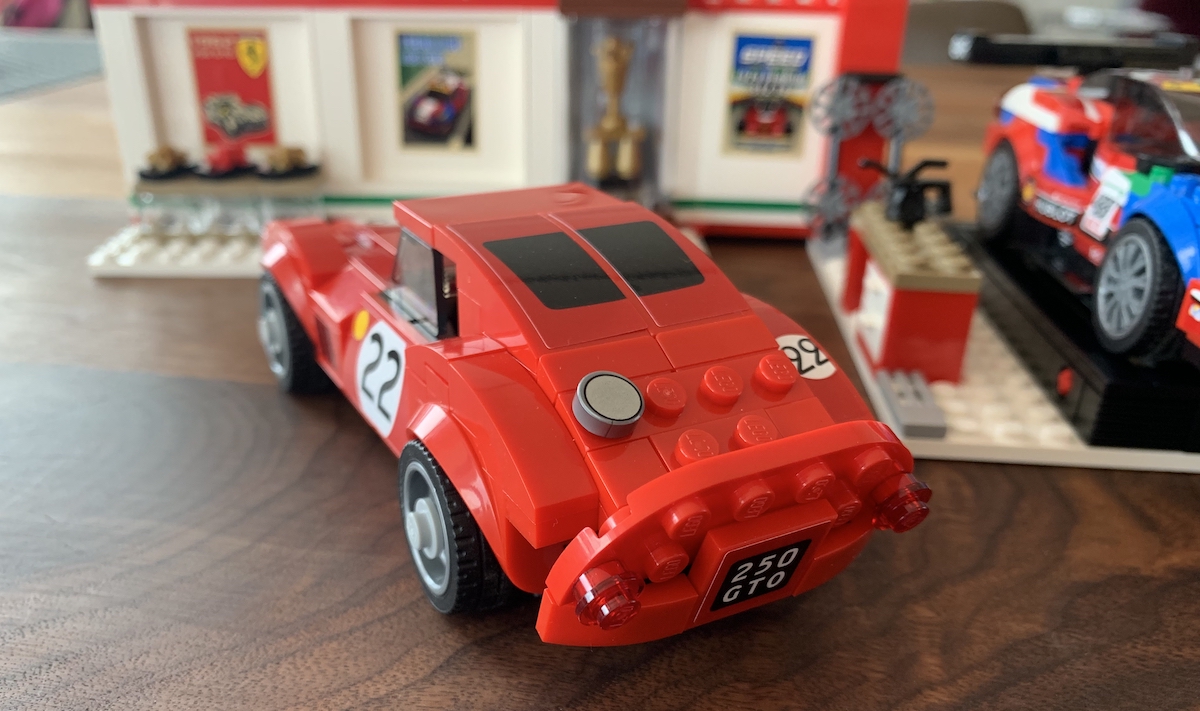 The rear of the 250 GTO Speed Champions model is unique to build, and the angled rear section captures the look of the real car.

The front of the 250 GTO uses a good mixture of stickers for pieces like grills and the Ferrari logo, with manual transparent LEGO pieces for the lights. There's a good amount of curvature built into the front of the set and I love the asymmetric livery of the car. The fuel cap and rear including the number plate are also fantastic.

The only thing that lets this car down a bit is the lack of a genuine, transparent, rear window, instead being made up in this set of black stickers. The wheels are very much in line with recent Speed Champions trends of leaving the wheels without hubcaps with 1 bit round parts put in as kind of wheel centres or centre lock. The approach to the wheels actually work with this model as I don’t think any of the existing LEGO hubcap designs would work well and this stays relatively true to the real car. 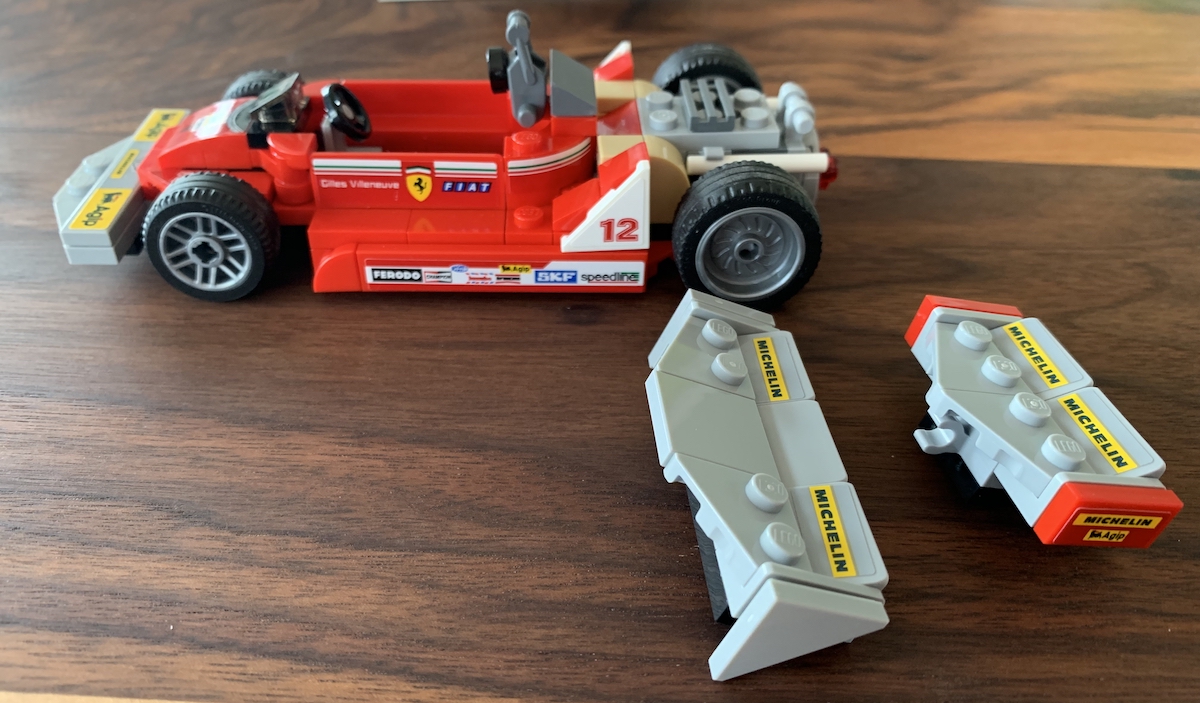 The Ferrari 312 T4 Formula One car as driven in period by Giles Villeneuve. The set comes with two wings, positioned here where they mount on the car for two different looks, the garage wall of the model has space to store both.

The next car in the set is awesome, and is probably my favourite part of the entire set. This is the Ferrari 312 T4, the reliable workhorse of Gilles Villeneuve and Jody Scheckter, which won 6 Formula One Grand Prix. This is a really unique car - completely different to anything Speed Champions have done previously.

The driver sits really low in the car and the body work doesn’t come up far at all. It’s a great representation of the original racing car, and coming from the era of some of the wildest aerodynamic experiments (including 6 wheeled cars and ground effect fan cars) it has two different rear wings that you can move around on the vehicle. The two wings can go either behind or in front of the exposed rear engine. In all honesty I actually think this may be my favourite Speed Champions car so far. 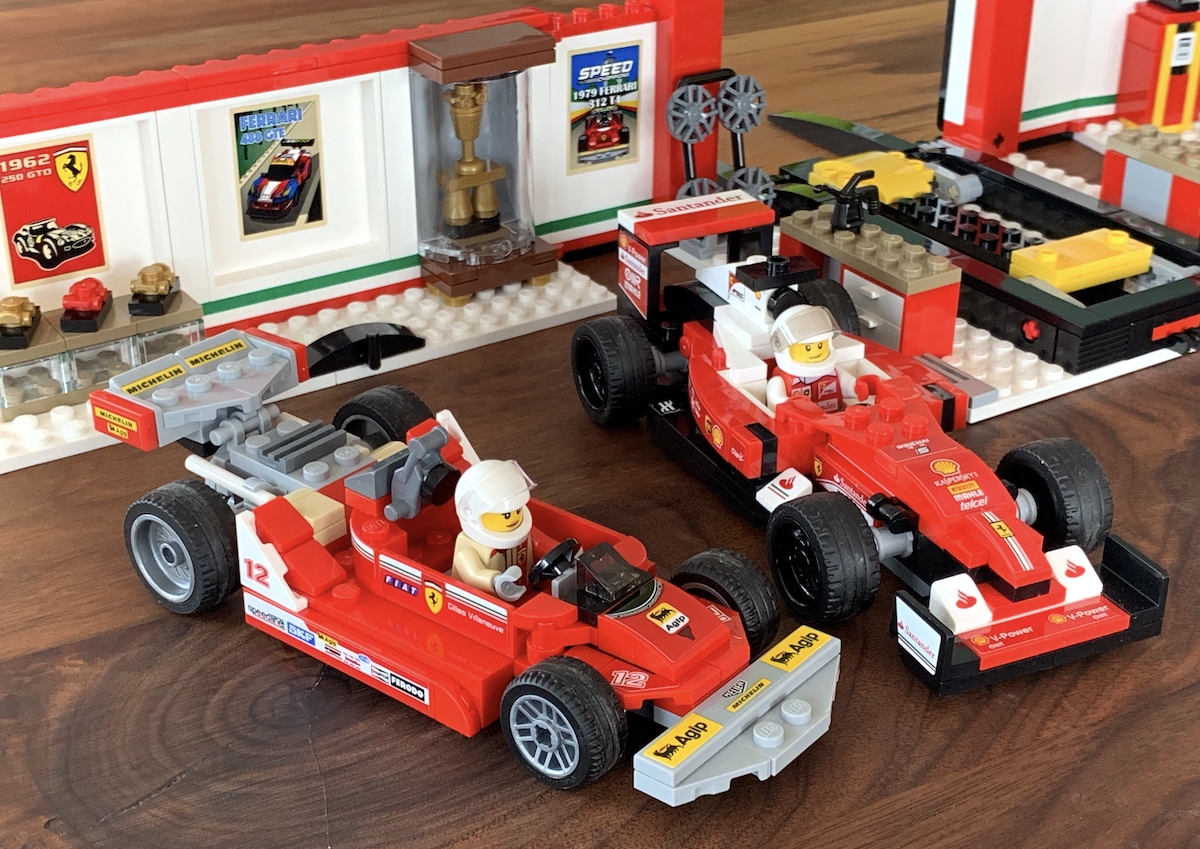 The 1979 Ferrari 312 T4 of Giles Villeneuve is joined by its spiritual successor, the 2016 Ferrari SF16-H of Sebastian Vettel. Formula One cars have certainly changed over 35+ years.

Another unique featured of the 312 T4 is that the rear wheels are the usual size but it has unique, smaller, front wheels to match the real car. The wheels have rim designs pre-cast into them and match well with both the wing design and suspension setup of the car. The overall effect is to give the model an aggressive rake - leaning forward when sitting still.

Even if you are not a massive Ferrari fan, I think you'll really enjoy building this set and it would easily take pride of place in any display. Between the set's price and it now being retired there's a relative rarity to this so if you're reading while it's still available - grab it. 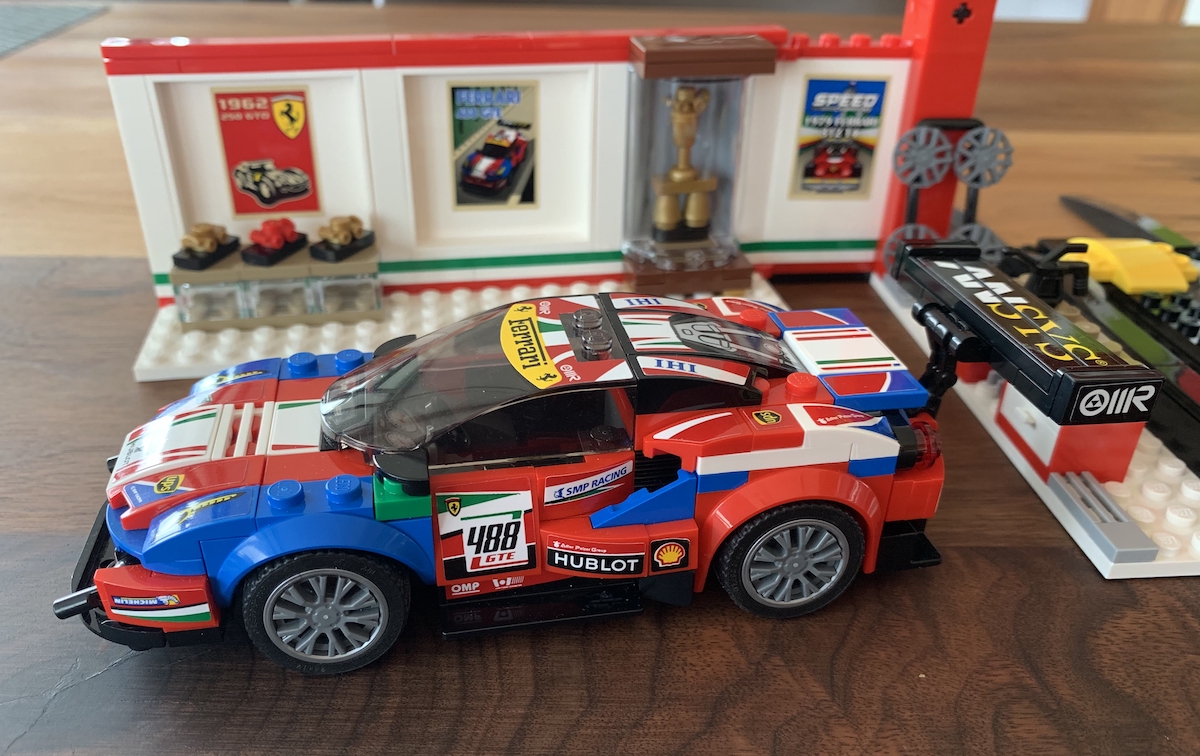 The 'AF Corse' Ferrari 488 GTE in Le Mans winning livery in front of the garage wall poster celebrating the win.

The third and final car included in the set is a 488 GTE. Now this to me seems like a cost saving or efficiency measure, as there was a standalone 488 model either in production or planning at the time of release of this set.

I understand that LEGO know not everyone will spend £129 on a 3 car set and the cost of production of a new car means they will want to make sure the effort they put into these sets makes the line profitable. In fact, we know some of the rationale behind this as the interview with Christopher Stamp about the '74 911 Turbo set released today had a similar feature of being spun out of a two car set where it was paired with a Porsche RSR.

This 488 is quite unique from the other as it has an entirely new sticker pack that's hugely comprehensive. The Le Mans winning livery for this car had a lot of colours going on at scales that couldn't be reproduced in brick and they've really put a lot of effort into the detail on this set to get it resembling that legendary car. I think this might actually be the most stickers on any Speed Champions model to date. 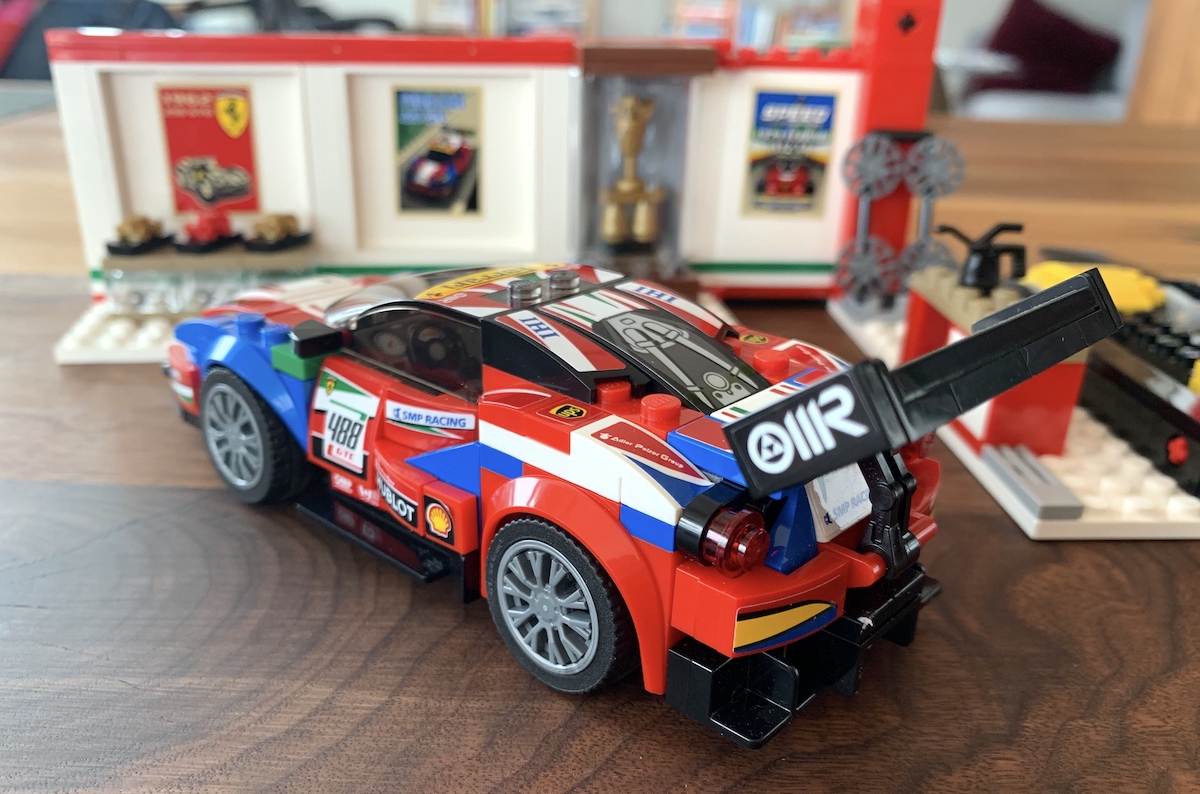 The rear of the 488 GTE captures the two rear lights well and that huge, articulated rear wing covered in ANSYS sponsor graphics really makes this set look like the endurance racer it was based on.

Stepping away from this model's race heritage, the thing I’d like have to seen changed with the 488 GTE is LEGO varying away from red for all these cars. I recognise when someone is flipping through a catalog or looking at models in a store, they expect the Ferraris to be red, but after a while it does get repetitive.

We just have to look at the North American IMSA series, to see the white Weathertech backed 488 running there to show how these cars can look in different colors - it'd also force the styling of the model to do the work of capturing what it is more. Overall, building this felt mostly like a rehash of the previously released 458 Italia GT2 (set 75908) from a few years ago alongside the similarly timed 488 GT3 Scuderia Corsa (set 75886). Between that and all the stickers, build fatigue definitely set in. 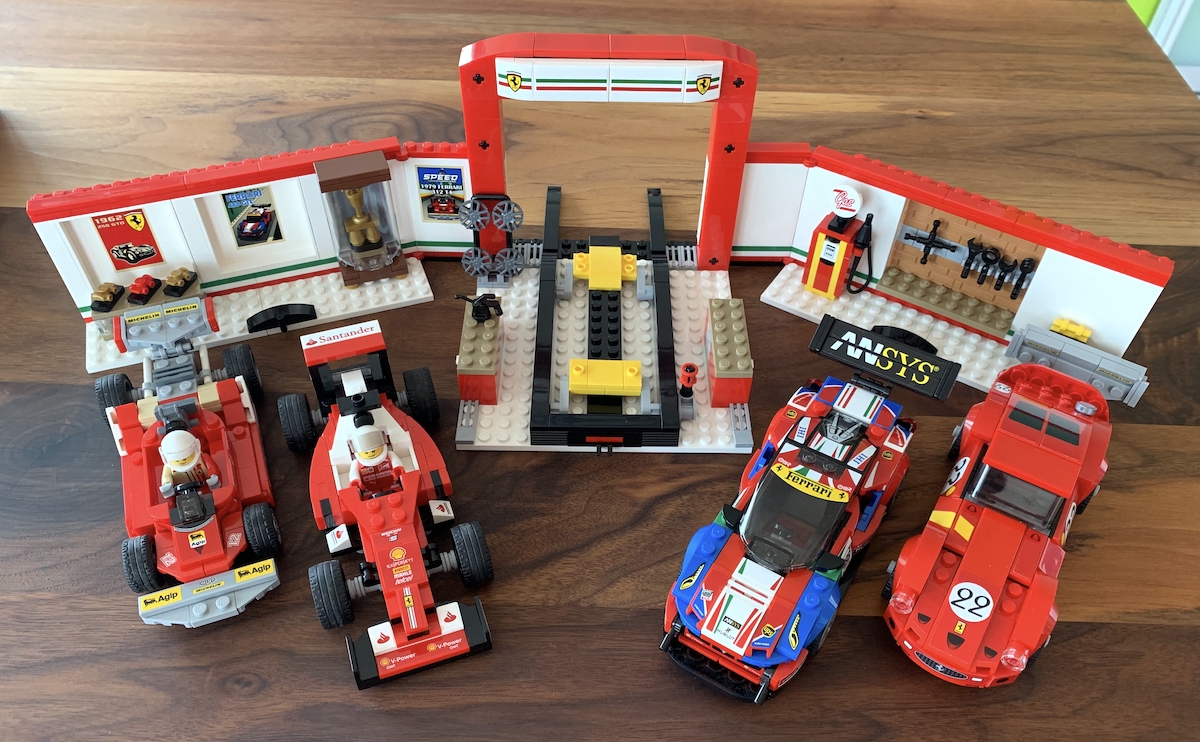 Overall, this is a great set. The accessories form a kind of Ferrari museum/factory display complete with ramps for putting one of the cars up and lots of pieces to stage the vehicles with.

The walls fold out and are very similar in width and nature to the Mercedes-Benz Formula One set, which this set compares to in terms of piece numbers, size and build. Moving away from a Formula One theme to highlight the heritage of Ferrari and providing something different for people who ended up buying both sets was a great move - for a Ferrari fan, this is a must buy.

For Speed Champions fans, I’d probably say the same thing - the 250 GTO and the 312 T4 are such good models that they make up for the 488 being repetitive. With this being a three car set it can potentially be difficult to get your hands on the individual models or entire set in future. You will almost certainly be displaying at least one or two of these as some the best models in your collection.

Manufacturers, cars, names, brands and imagery featured in some cases include trademarks and/or copyrighted materials of their respective owners. All rights reserved. Set reviews are © 2019-20 speed-champions.com.