A Trip to the London LEGO Flagship Store 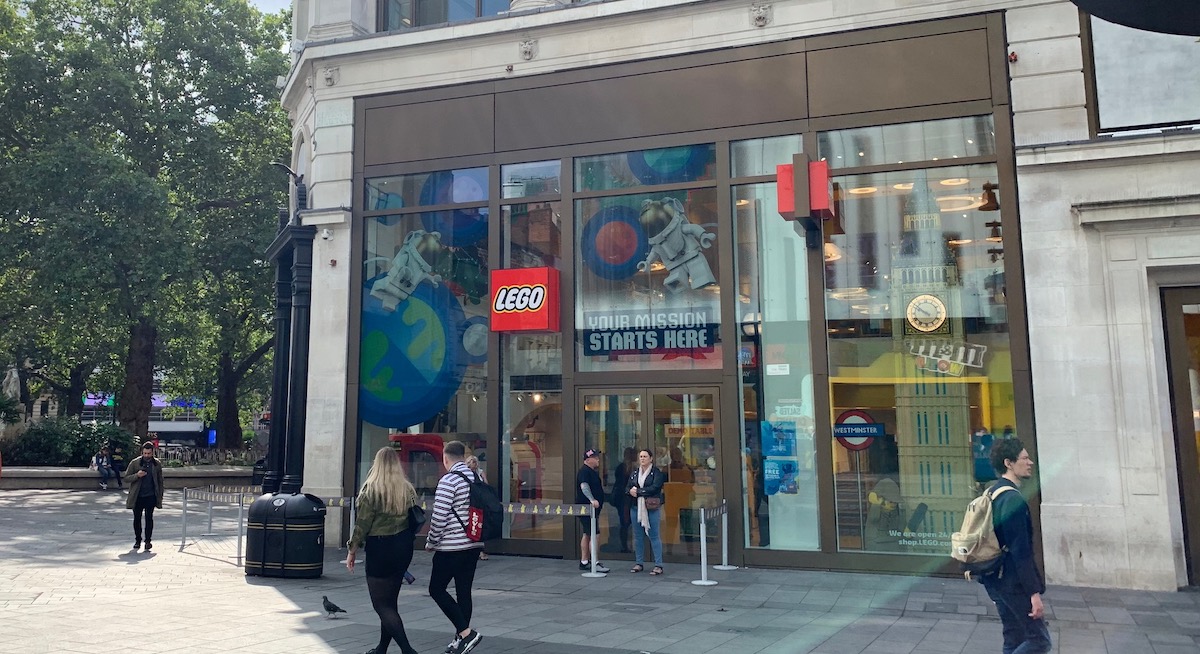 The LEGO Flagship store in Leicester Square, London, England. Early in the morning - don't expect this small a queue if you go there at a normal time.

To celebrate the launch of the 1974 Porsche 911 Turbo that we’ve been covering so heavily over the last few weeks, our London correspondent decided to take a trip to the LEGO flagship store in Leicester Square on the morning of the launch to see if there would be any cool promotions or tie-in events for the launch. The LEGO store in Leicester Square opens at 10am, and seeing as it was a Thursday in the middle of July, we were a bit unsure of what to expect in terms of crowd levels. Getting to the store with about 10 minutes to go there were only a few tourists hanging around in the taped off queue. Knowing how busy it can get in the store, especially in the middle of a Saturday afternoon with queues of up to half an hour, we were expecting more of a wait to get in.

10am came and went, and the doors didn’t open. We had to wait 3 or 4 minutes for the staff to welcome in people, and to be honest after entering I can see why the store operates a one in/one out policy at busy times. Despite a prime London site, this store is deceivingly small, with the two levels not providing a lot of floor space to move around in, and all the walls of the store absolutely covered in sets available to buy. 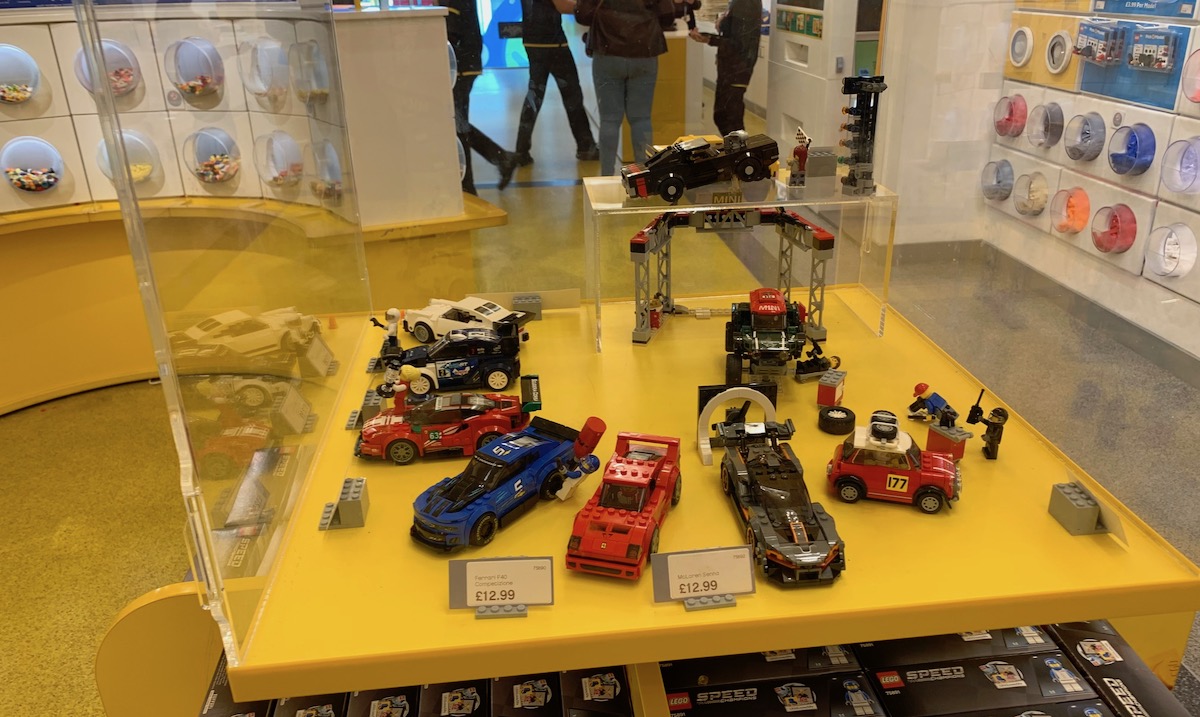 The LEGO Speed Champions display in the flagship store, featuring all of the current sets including the new individual '74 Porsche 911 set 75895.

You walk straight in and on your left there is a huge LEGO London Underground display, a Big Ben, a Police Officer and other UK related special builds. For the flagship this makes a lot of sense. The recently released Harley Davidson is on display in the window in a glass case, with 2 large window displays dedicated to the NASA Apollo sets that have been released and are gaining a lot of press attention (not to mention it being the anniversary this summer).

Speed Champions fans will be disappointed, your first find on these sets will be in the Top 10 shelves near the tills on the bottom floor. To find the sets your looking for, head up to the first floor and you will find a glass display case with all of the 2018 and 2019 sets that are still available and look really good. I think the display models may have been coated in some sort of reflective plastic as the light really bounces off the cars. 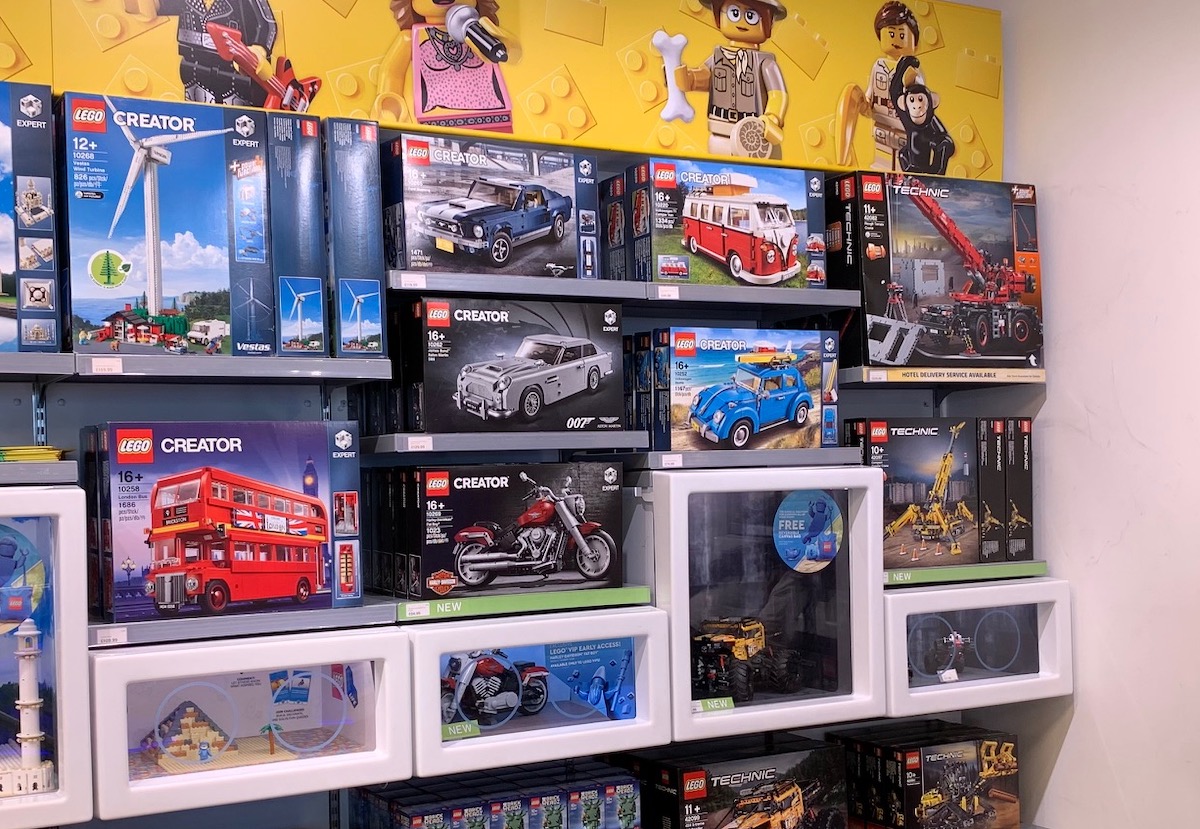 LEGO Creator sets on shelf at the London Flagship store. A decent range between the VW Bug and Camper, Aston Martin DB5, the new Harley Davidson Fatboy set and the Ford Mustang. The Red Routemaster - London Bus 10258 set was tempting, we may yet review that in future here.

In terms of what was on display, there was obviously the new '74 Porsche 911 Turbo, with 6-10 boxes of stock on shelf. There was also the McLaren Senna, Camaro ZL1, the recent Mini double set, the Dodge Demon and Charger as well as (quite strangely) the Ferrari Ultimate Garage of which there was about 3-4 boxes left, so clearly this set hasn’t sold as many. We've written before about how the relatively high price of this set, given the 3 vehicles, can cause it to hang around on shelf.

There wasn’t any Speed Champions branding or promotional posters around which is a bit of a shame, seeing as how popular the line seems to be. We were also the only people interested in the new set 75895 911 Turbo, buying 2 of the sets on display, which is a little disappointing for the launch day of a new set at a flagship store. 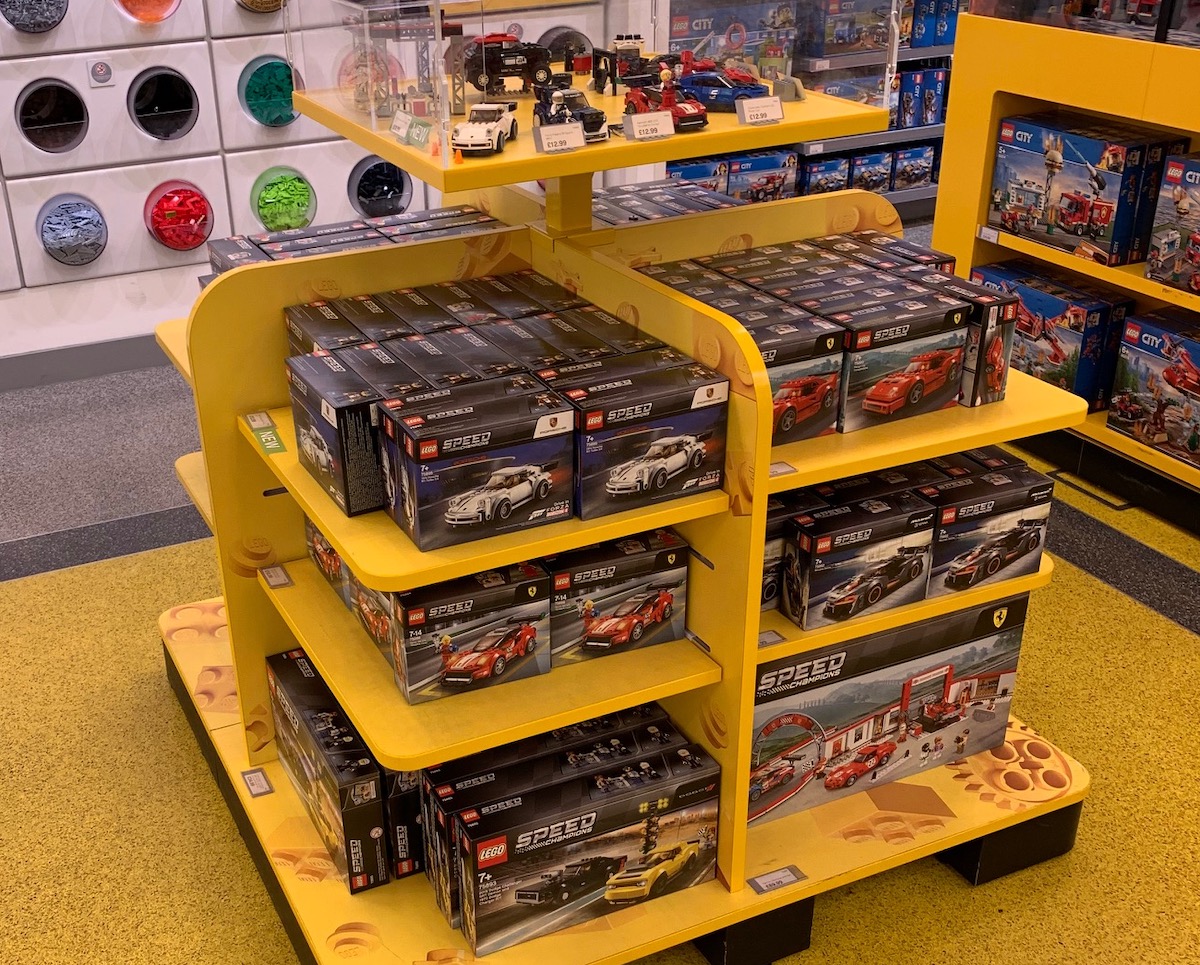 Tons of stock of the new 911 Speed Champions set, plus the Ferrari F40 Competizione, 488 GT3 and Senna. Surprising to see the Ferrari Ultimate Garage still in stock, but the bigger sets do seem to have a longer shelf life.

Overall, the shop itself is a cool experience, with staff members doing live builds of the new sets. LEGO in-store are really pushing the new Hidden Side brand, which seems to be a kind of teen/horror/sci fi vibe - very much along the lines of Stranger Things, which is strange considering the licensed sets for that Netflix shows have recently started to be released.

In store, there's also the the infamous portrait machine, where you go in and it takes a photo of you and makes a custom LEGO set with instructions on how to make a LEGO picture of yourself - effectively, a LEGO jigsaw puzzle. This machine was featured in a documentary before the opening of the store and attracts a lot of attention, but fewer buyers in real life as the pictures aren’t as great as they could be. The process is fully automated, producing the same number of bricks in every box but different instructions, and the build isn’t really a build more just a put together/paint by numbers style book. The £99 price tag for the portrait also hurts.

The store's a great place to be as a LEGO fan, but as a shopper after something specific it’s maybe just better to be in and out quickly. 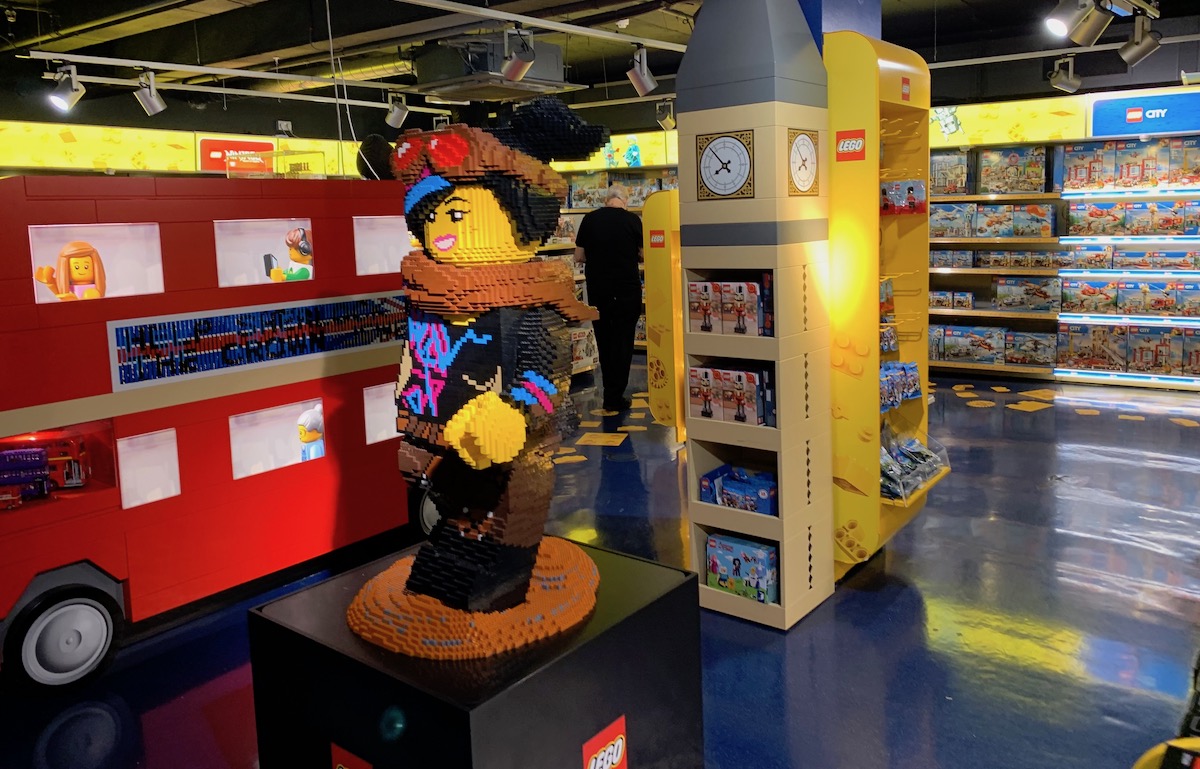 What Hamleys in London lacks in being the LEGO store it more than makes up for in aisle space - they certainly have a big selection and plenty of props like this full size LEGO Movie character.

Not content with just visiting the LEGO flagship on this visit, with our bag stuffed with 2 of the new Porsche set, we decided to head up to Hamleys on Regent Street. This is one of London’s most famous toy stores, and from memory had almost half a floor dedicated to LEGO. We had hopes of discovering a hidden treasure trove of hidden or retired sets that hadn’t been picked up.

Heading into the store, there are tons of staff demonstrating toys and dancing. You have to head up 4 escalators and 1 set of stairs to get to the very top floor of the store, which actually has some quite good views. The toys get progressively older in target audience as you rise throughout the store, and when you get to the 5th floor you’ll find the LEGO section. 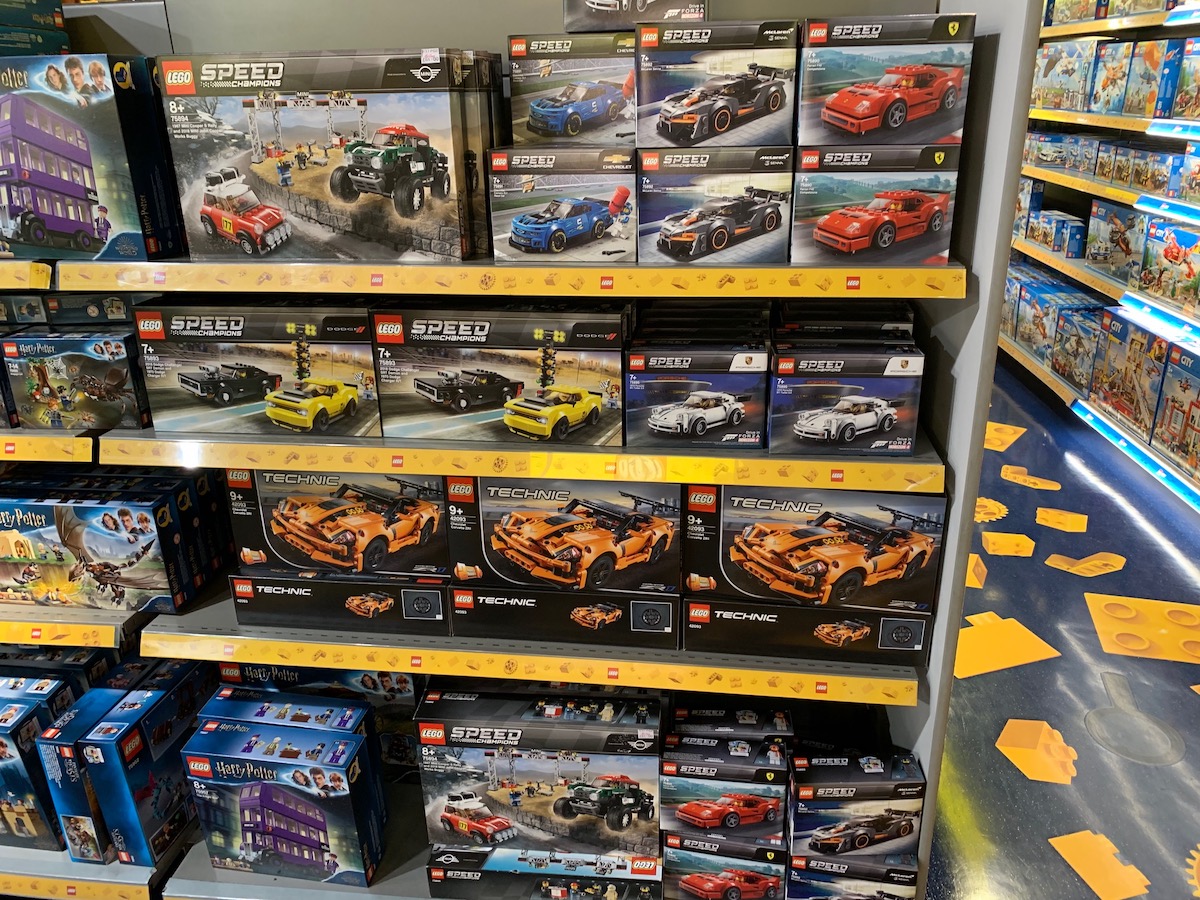 A very decent selection of sets on shelf at Hamleys in the Speed Champions line. These are all current editions though, so nothing too hard to find here.

Again there was no real luck here. The new 911 Turbo was present in quantity, but wasn’t really being promoted and wasn't even present in the rack of 'New Items' being promoted at the front of the section, instead found tucked away on a shelf. The Senna, Camaro and Dodge sets were all on display, but taking up maybe a third of the shelving. There was nothing of massive interest in the store, apart from may be the small LEGO Creator London Red Bus that we may yet feature at some point.

Overall, between the two stores, there wasn’t a huge push for the new set on Thursday the 1st of August, but it was still a fun day out to go around and see all of the sets on display and staff so passionate about the sets.

If you're visiting London I’d definitely recommend heading to the flagship store. It’s a shame they didn’t take more space and inspiration from the M&Ms World attraction across the street. Making the store more of a destination space with a few entertainment pieces or even a small attraction from LEGOLAND resort in Windsor would massively increase the desirability of the store for fans, rather than just trying to get high value purchases from tourists.