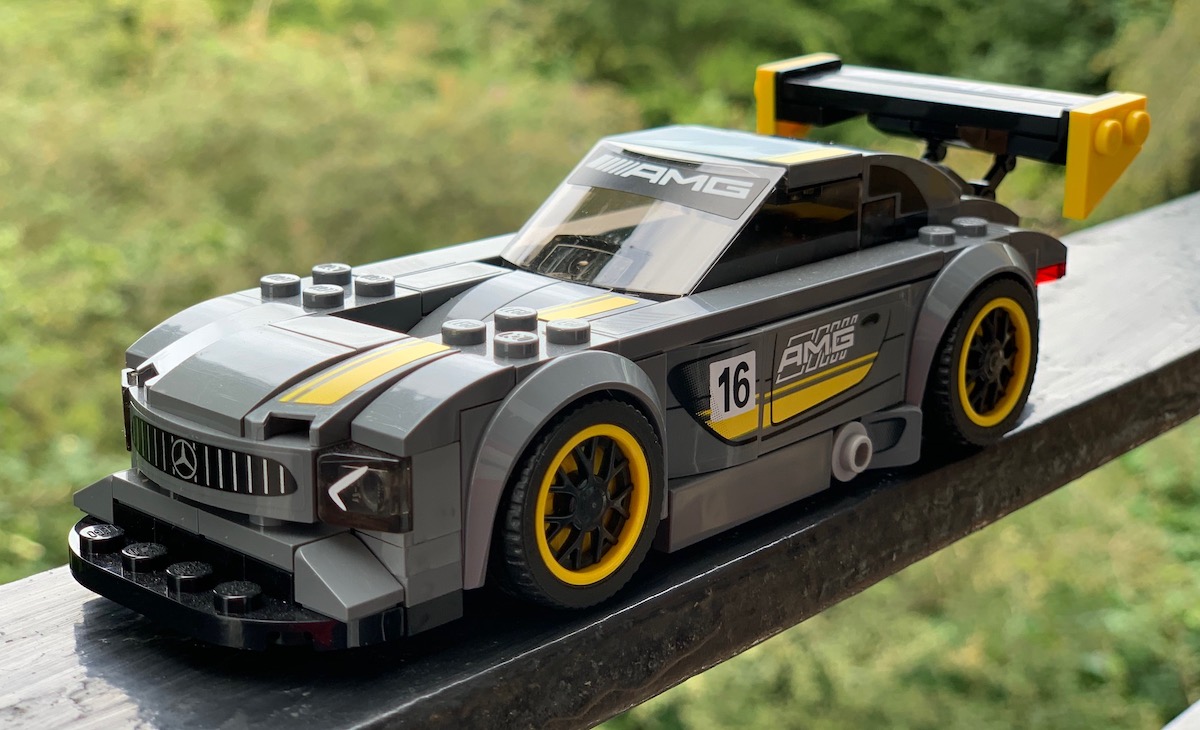 Today we're reviewing my personal favourite Speed Champions set, and with over 30 sets on display here that's no mean feat for a model to achieve. Based on the picture above you won't be surprised to learn it's the Mercedes-Benz AMG GT3 race car, set 75877. This set was released in 2017 as an anniversary tribute to the 50th year of Mercedes-Benz AMG and is now retired - so you'll need to look hard to find a new in box one these days.

The set features the car in a dark pewter grey colour with AMG customer racing branding, continuing the LEGO trend of releasing customer racing/launch liveries as they did in 2016 with the Audi R8 LMS set. 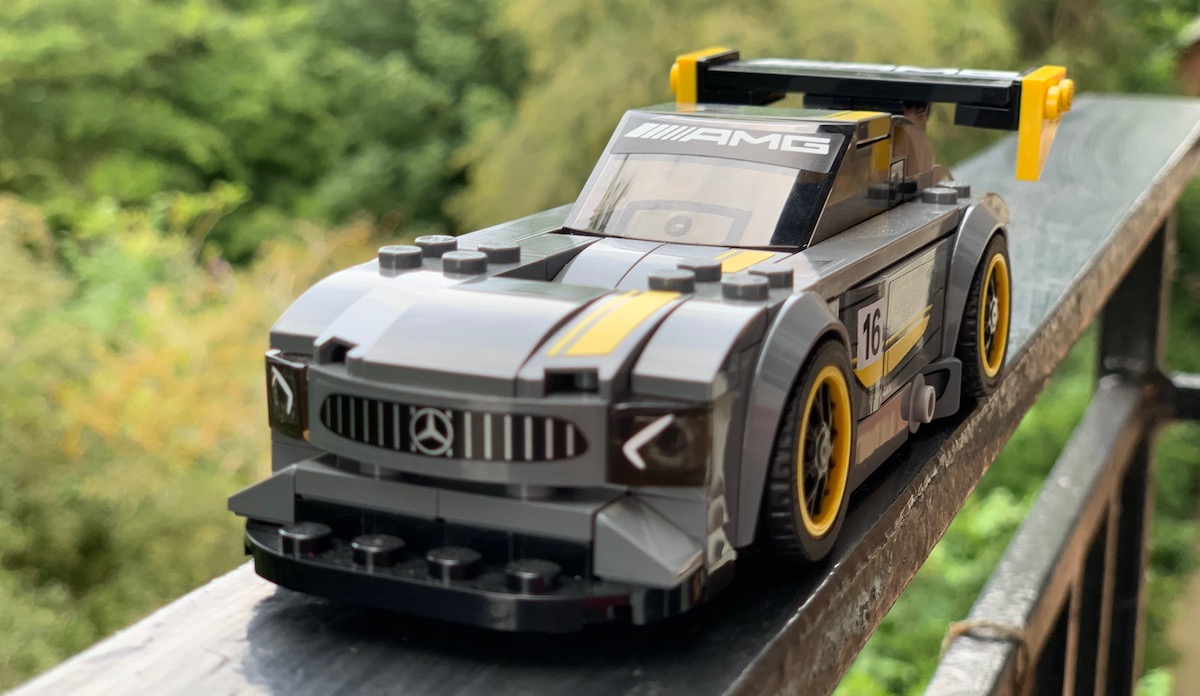 The front end of this set is a real step up from contemporaries like the Audi R8 LMS, with the transparent headlight blocks with reflections and the curved piece for the grill actually capturing the real life car well.

Those of you who watch sports car racing will know how iconic the AMG GT3 has become in such a short period of time. Teams such as HTP Motorsport, Black Falcon racing and the famous purple Keating Racing/Riley Motorsport Wynns car competing for victory at the 2019 Le Mans 24hr race have brought a real race pedigree to the car. With its sleek, nose forward profile the car looks distinctive on the endurance racing grid and LEGO have really captured that aspect in the model, along with the motorsport tweaks. 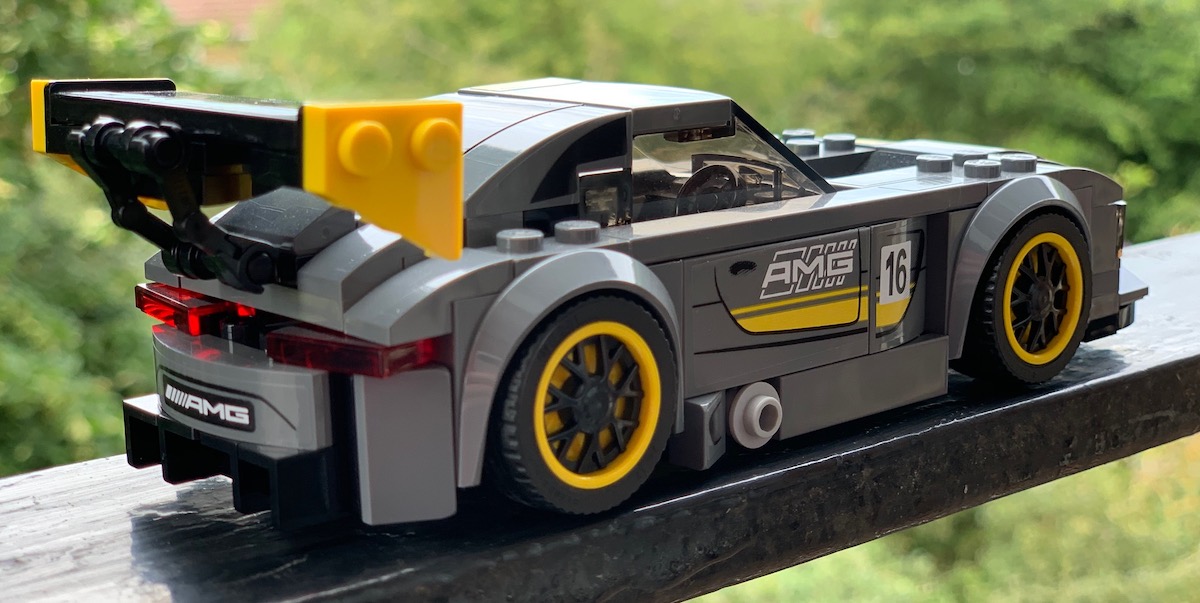 That huge rear wing is true to life and the wide rear diffuser gives the model a strong look from the back. Maybe they could have fit some AMG logos on those wing endplates though?

Building the set's 196 pieces starts in the usual way - with the black chassis piece. A lot of the detailing on the car is achieved through the sticker set - there's a false door made of a sticker and the front grill including the Mercedes three-pointed star is too. The only sticker I'm not sure about is the rear bumper sticker which tries to give some sculpting with a black line, I think the piece is too round for that to work and the AMG logo on a black background looks out of place.

LEGO managed to avoid the weird look at the front of the Audi R8 LMS by not making the headlights a sticker - instead using smoked transparent ramps and even including transparent stickers to give an impression of reflectivity - a great detail and one it'd be great to see on future models. It's always a trade off with these models, but the truly great Speed Champions models strike that balance where you just have cool brick built features that capture the car's character.

True to form for a customer racing livery/launch branding the only branding on the car is for AMG. Elements of this yellow striped livery actually made it to street cars, on the 'Edition One' C63. Using a thin transparent red strip for the rear lights matches the headlights well and makes the back of the car reminiscent of the real thing - the movable GT wing and wide diffuser add some nice detail touches. 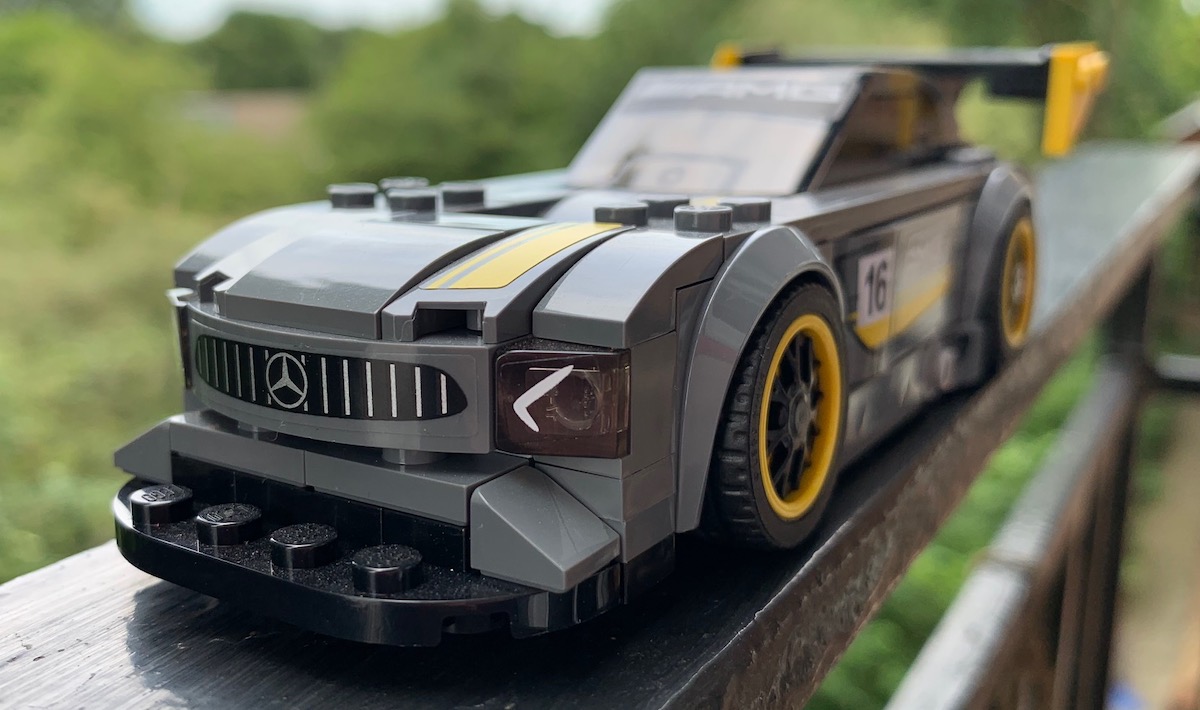 The aggressive front splitter is interchangeable on this model to tone it down if you want less aero or just a less aggressive looking model.

Building this set is a lot of fun. The proportions of the model, with it's super long bonnet/hood captures the 300SL and modern day SL era of Mercedes sports cars, all the way up to the Mercedes-McLaren SLR. That huge bonnet and short passenger compartment is one of the most iconic designs, right up there with the rear-engined 911's bug like shape.

The cab back layout is really prominent in the Speed Champions model - the windscreen of the car starts at the halfway point of the car! The wheels are pretty much spot on for car as it was previewed (see the picture below for proof of that) and the black rims on yellow wheels give a cool lip effect matching the real thing.

The side profile really shows how cab-back the layout of this traditional Mercedes-Benz sports car layout is. The bonnet vent and side exhausts add some great contouring to the model. Both splitter and diffuser protrude from the front and rear of the set - there's no way you'd miss the motorsport vibe here.

LEGO have definitely gone for realism on this set, silver is Mercedes' traditional motorsports color and they launching this car in a dark metallic silvery grey, almost identical to the one the model is in. The AMG windscreen sun-strip is a nice touch and really brings a motorsport vibe to the set in the absence of tons of small sponsor logo like we've come to expect on endurance racing car sets. The colour really works for the car, when the set was released this car didn't have an iconic motorsports livery (arguably it still doesn't, although I'd take HTP Motorsport's livery that's not too far from this).

I’ve seen MOCs for this model but none of them really improve on the original colour scheme, with the GT WING and darkened cabin glass the dark grey seems to be the best colour choice for this set. If anything, a bright silver and green Petronas livery matching the Mercedes-AMG F1 livery would be great for display, but since the car hasn't been campaigned in such a livery, slightly false. 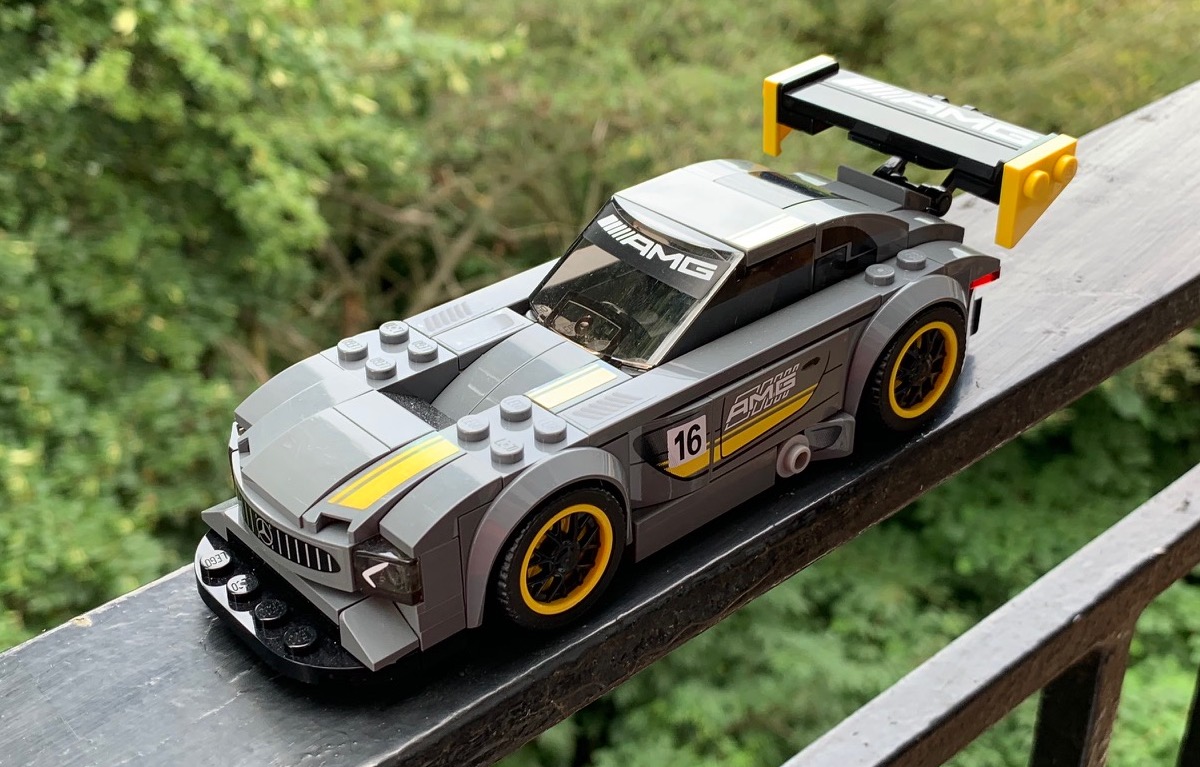 Top view of the model really shows off that deep bonnet vent. Maybe one day we'll get a Ferrari 488 Pista and LEGO can try to model it's bonnet vent, all the way through from the front bumper. This really is one of my favourite Speed Champions models.

One of my favourite features of the set is that they haven’t gone for any play accessories, instead choosing to include an alternate front end for the set, allowing you to customise the setup for different races. The alternative front end removes the large splitter at the front of the car, and given the rear wing/spoiler is adjustable you can really play chief engineer with this set.

Now that we're seeing the launch of the Mercedes-AMG GT R Pro, a street going version of the AMG GT based on the race car's DNA (similar in spirit to the Porsche 911 GT3 RS and it's relationship to the 911 RSR), I'm keen to see if any MOC creators out there will be able to add a few touches to this set to capture it. Maybe we'll even see a Project One in the 2020 Speed Champions Releases to compliment this set - it's been too long since there was a Mercedes to build. 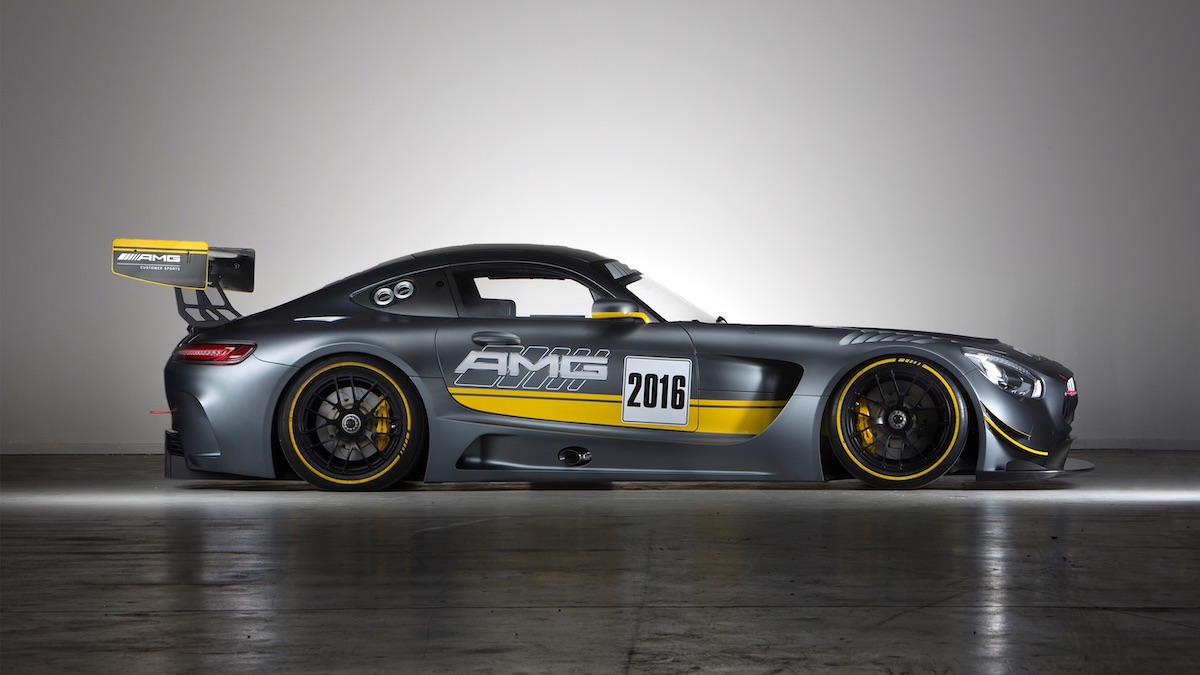 Overall: 88 (How we rate sets and models)

The overall score captures the strength of the model, but it doesn't quite do the set justice - while on a numbers based system, the set is almost there on every category, to me how this captures the real life car is right up there with the top Speed Champions sets.

The LEGO-ness score is slightly hit as I feel the door stickers are a bit of a shame given the components we know LEGO have available for that. Detail is perfect when you compare it to the launch photos of the real thing - I'd like to have seen stickers on the wing endplates to add a bit more detail but that's nit picking. The build is good fun, its an interesting model to build, but there's nothing super crazy like the upside down wing on the McLaren Senna or the surf board used as a rear wing on the McLaren P1.

This is absolutely a display model, capturing the unique look of Mercedes-AMG's GT cars well and with that iconic colour, really warranting being out to see. With only a front bumper change included in the set, you'd think we'd penalise on accessories, but I'm keen to see more sets do this - include things that make a lot of sense and add value to the model. In this case it's almost perfect.