Our Visit to the Full Scale LEGO McLaren Senna 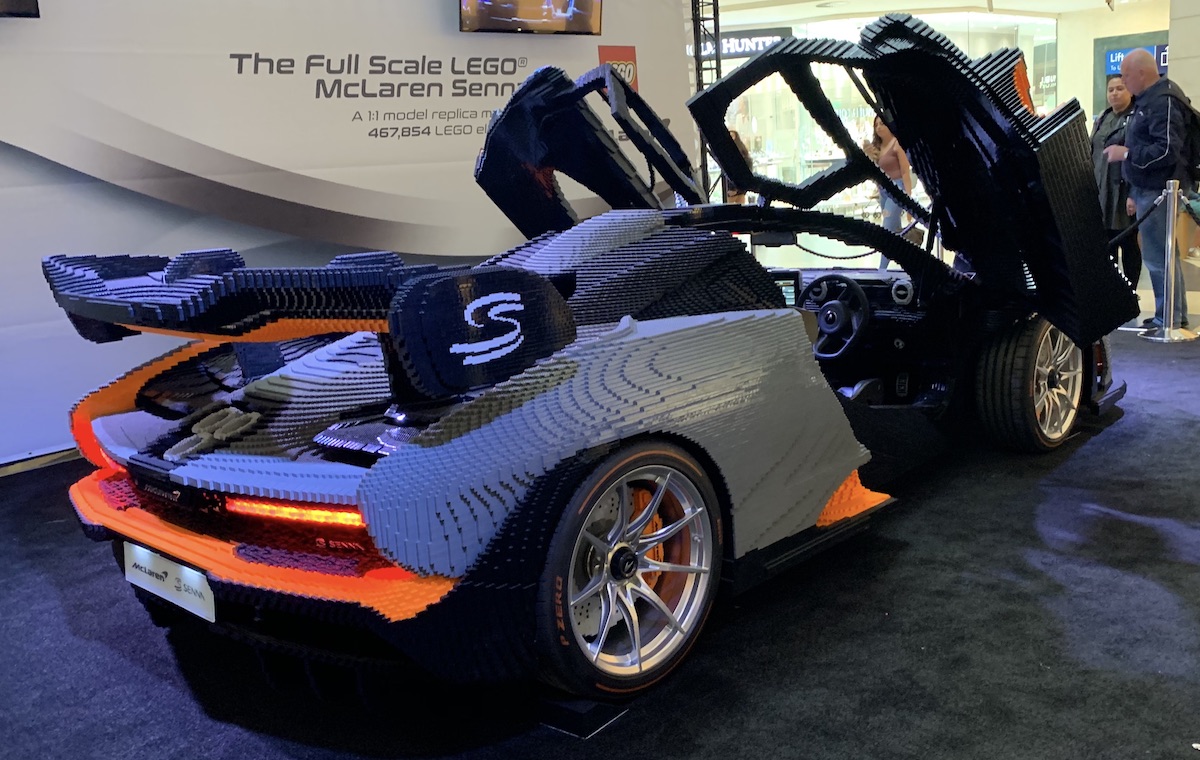 The full scale LEGO McLaren Senna on display at Bluewater Shopping Center in Kent, UK. This angle really shows off the rear lights and tailpipes, along with the genuine McLaren steering wheel, infotainment system, wheels and tyres in use on the model.

On an unusually cold September morning here in England, our London correspondent set out in search of the life-size McLaren Senna model that LEGO have been touring aorund the world. Since the model was built it's been busy - on display at the Goodwood Festival of Speed, at the E3 Games Expo alongside the launch of the LEGO Speed Champions Forza Horizon expansion in Los Angeles and now touring the UK as part of the LEGO Promotion "I Love Cars". "I Love Cars" doesn't just focus on lines such as Speed Champions, Technic and Expert but also features LEGO City sets and just about any vehicle based set that includes 4 or 2 wheels. We had decided to catch the Senna when it was on display at Bluewater Shopping Centre in Kent. It had previously been in London, but having visited the LEGO flagship store there and knowing the crowds we decided to visit on a weekday at Bluewater where it would be quieter. 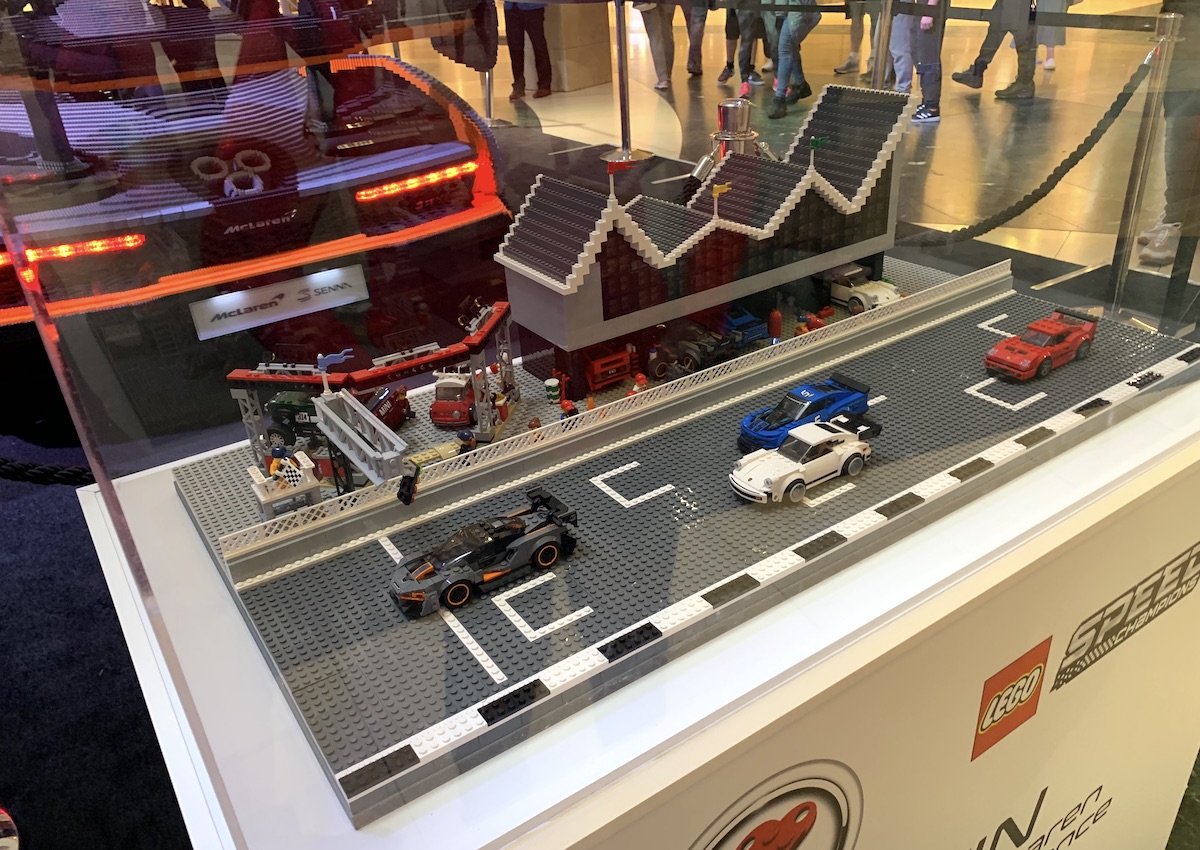 Naturally the Speed Champions McLaren Senna was on display as part of a small build. Based on the roof of this building I'd almost guess it was meant to be the pits at Silverstone. The other 2019 models round out the display, with the new Porsche 911 Turbo, Chevrolet Camaro ZL1 and Ferrari F40 Competizione representing on track.

Arriving at the shopping centre around lunchtime, we headed straight inside to the LEGO store on the first floor. It's not the biggest store, but it usually has a lot of good displays. The store itself is L shaped with the sides decked in all of the latest LEGO sets. There's a good amount of floor space with standalone displays and counters and the usual pick a brick wall at the back for those needing individual pieces. After picking up some food and maybe a Krispy Kreme or two, we headed into the store and it was clear that the 'I Love Cars' promotion was on.

Two staff members just to the side of the entrance were doing a live build of the Speed Champions McLaren Senna. The main stand in front of the entrance was displaying the Technic 911 RSR for the princely retail price of £139.99 (slightly difference to the massive discount on it that we recently found online) and other cars were out. Interestingly the Technic Bugatti Chiron was on display but is no longer sold. LEGO are clearly very pleased with the Chiron set and it remains a flagship model for them, even if it possibly either was not selling enough or was too expensive to maintain production of (which doesn't really matter because it was promoted as a Limited Edition set anyway). 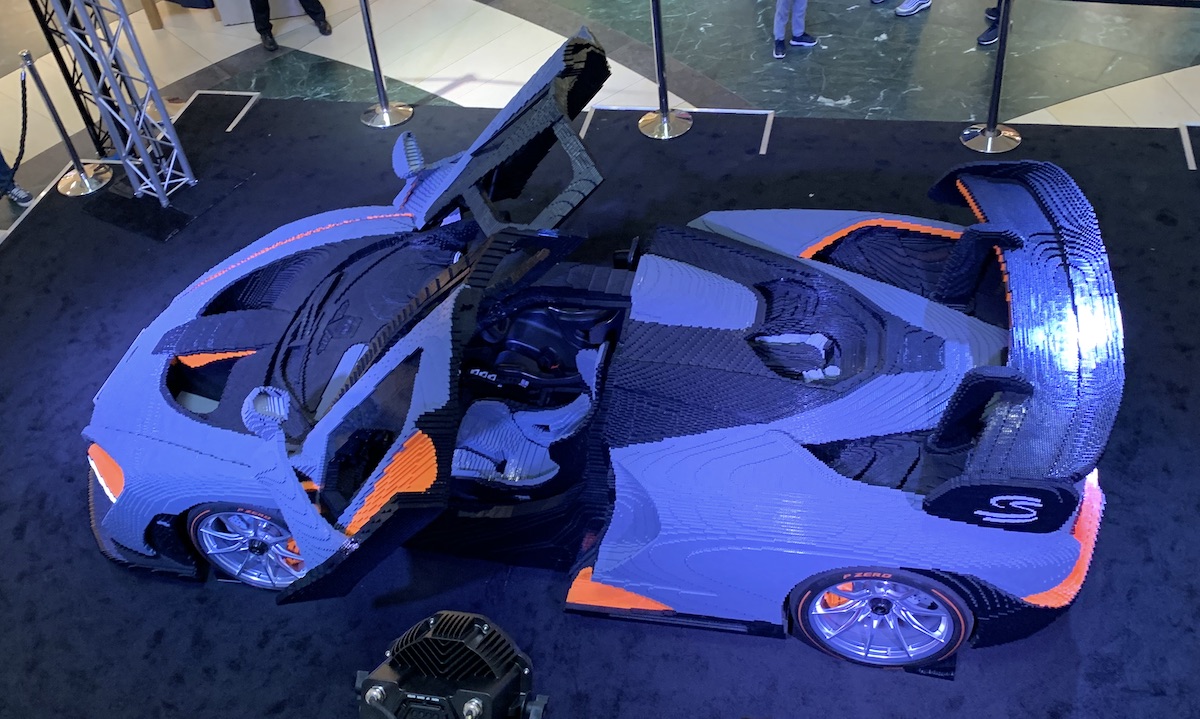 A side on view shows the size of that under-hung rear wing on the Senna, along with all the orange highlight areas hidden away on the model, check out the front and rear vents with their orange highlight lines inside. The real wheels and tyres really add scale and realism to the build.

There was one thing noticeable when we walked in though - no life-size McLaren Senna. I was dissapointed, given we'd reported news and dates of the tour here on our website in depth, so I wasn't about to be put off and braved the question to the store manager of 'I read online that you were doing a special McLaren display this weekend'. He was super friendly and happy to explain. LEGO have actually booked one of the event spaces at Bluewater (the shopping centre is a triangle, and at each corner there are large open spaces), and the car was actually there. With a sigh of relief, I checked out some of the latest sets that were on display, including a £649 Millenium Falcon, the NASA sets which I am a huge fan of as well as the new licensed Friends TV show sofa setup - clearly drawing in new fans who love items from the licences. Of course, as with our visit to the Flagship UK store a month ago, Hidden Side was also being heavily promoted in the form of window stickers and posters. 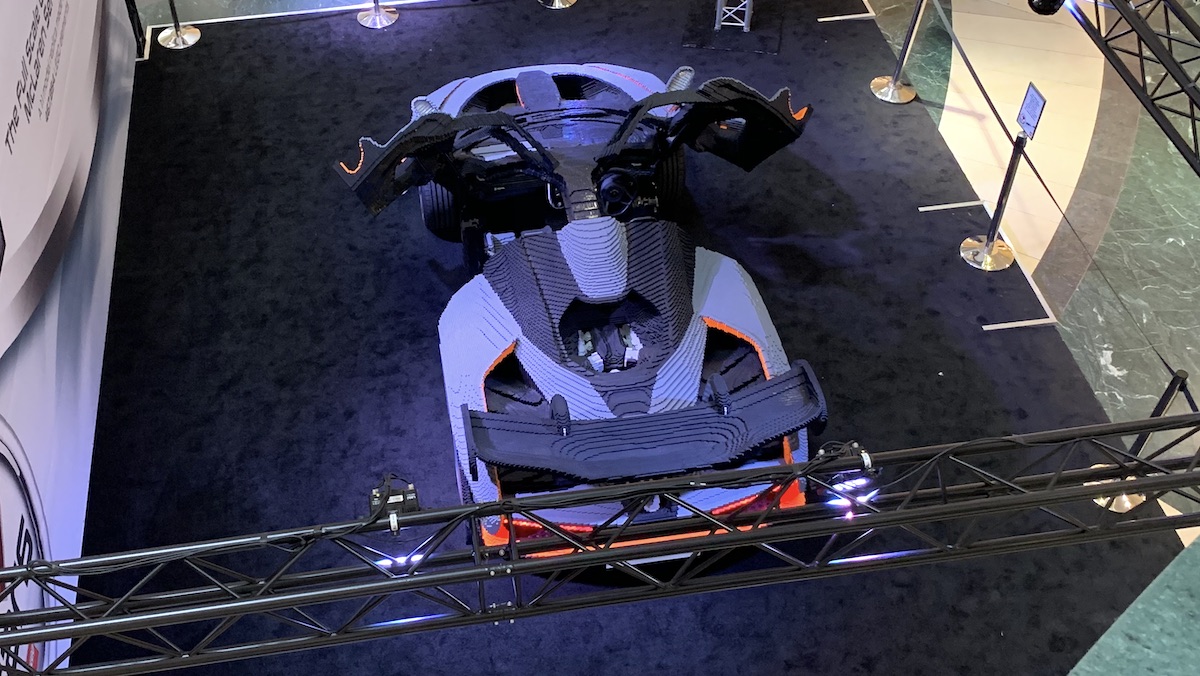 The top down view of the full-scale LEGO McLaren Senna. The event lighting gives it a really blue tone - it's dramatic to see the model in real life. The deep aero cuts in the bodywork are really visible top down, and how narrow the cabin is with the doors open.

We headed on, and from the first floor of the shopping centre arrived at one of the three corners that make up the Bluewater Shopping Center, next to an M&S. We looked down and got an extremely impressive view of the full scale Senna. It was set up with a full professional lighting rig, stage and promotional stands all around it pushing all of the different LEGO cars currently on sale. The gullwing doors were fully raised and the LED lights were activated - the model even had its own security. We made our way downstairs and checked it out up close and it is definitely worth the travel to go and see. The sheer amount of workmanship that has gone into this vehicle is breathtaking. As car enthusiasts we were particularly impressed with the genuine Senna rims and tires, steering wheel and in car entertainment setup, as well as a drivers seat which is a genuine racing bucket seat from the actual car (although the passenger seat is LEGO). 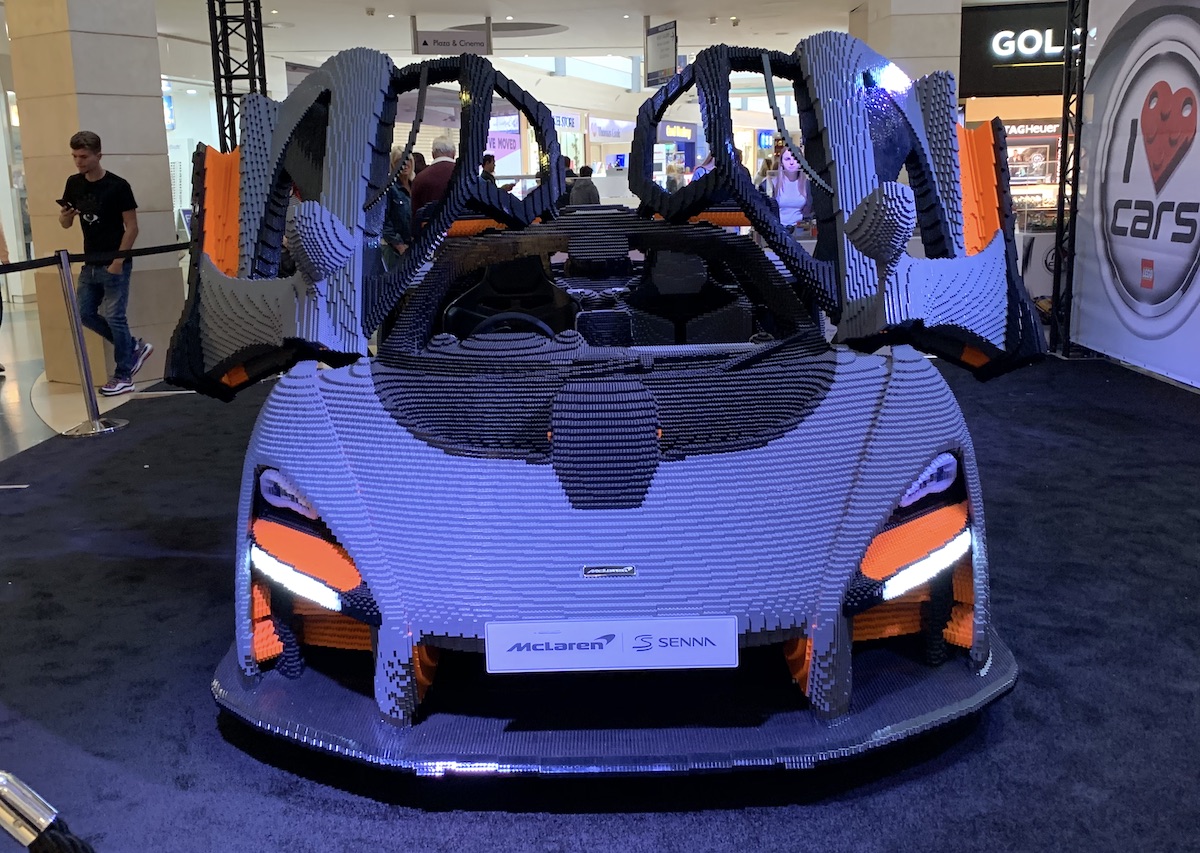 The front of the LEGO McLaren Senna has that deep splitter and the great contours of the street car captured well. The two tone grey and orange colour scheme really works in LEGO (I'd assume this is LEGO's blueish gray brick colour)

There were a few facts posted around the model's display. These included the fact that it's made out of 467, 854 separate LEGO pieces; in the time it took to build the model the McLaren Technology Centre could have produced 9 of the real vehicles. The model weighs 1700kg (500kg more than the actual car). The start button in the LEGO version activates the electronics system, infotainment and LED lights. The design and concept took 2210 hours for LEGO, and then a team of 30 builders took 2725 hours to finish the model. This model can't have been cheap for LEGO to make and that's probably part of the reason they are putting the logistical hassle into transporting it across the world to show off while the Speed Champions Senna is still on sale. Even on a Friday morning it was attracting crowds and people taking photos, so it's clearly having the desired effect and no doubt pushing people into the small £12.99 investment in the Speed Champions model it promotes.

If you have a chance, the car is on display at Bluewater for a few more days before it moves on again, back to London. We'd predict more tour dates being added across Europe in the coming months. Whats next for us here at Speed Champions? We've learned that the full size Bugatti Chiron model has been on display at the Bugatti factory in Italy, (although if you happen to be in Budapest between September 16 - September 22, 2019 it's on display at Westend City Center Millenium) so maybe it's time for a couple of days road trip to go and get our eyes and camera around that legendary full scale model.