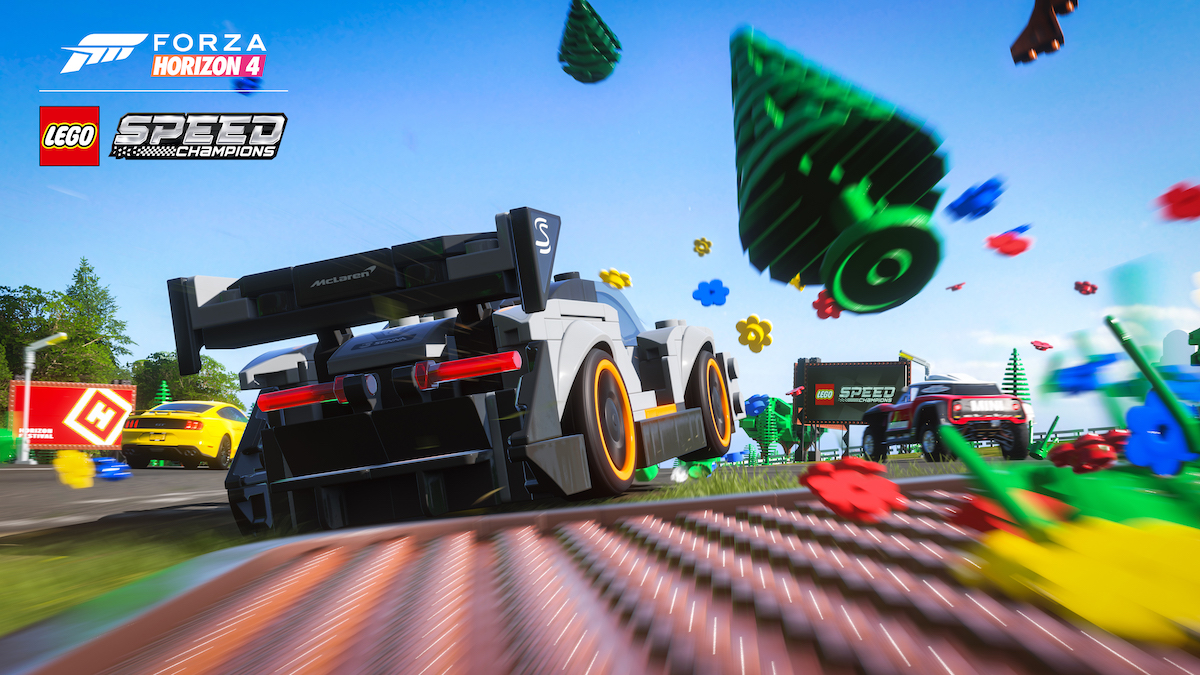 Crashing through scenery, exploring the LEGO world and winning races - this is your guide to completing those Brick Challenges, expanding your house and garage and winning that secret barn find - the 1974 Porsche 911 Turbo 3.0.

We’ve already covered the Alien Cells and Alien Plants that are dotted all over the map in LEGO Valley, but in this article we are going to be looking at the brick challenges that form the basis of the expansion. You’ll know if you’ve played it the game that in order to upgrade your house, building a pool and getting to the Master Builder’s house, as well as unlocking both the Ferrari F40 and McLaren Senna you have to work through loads of different challenges that grant you a different level of bricks for either completing them or entering and winning races.

Now there’s a few of these challenges you will unlock as you play along, but there’s definitely some of them that will require significant effort, especially unlocking the Winner’s Trophy and will require a certain amount of play time, skill and effort.

200 Bricks - You’ll get this one by doing the first few mandatory races when you boot up the expansion. 200 Bricks will get you your First LEGO House built as well as unlocking the purple bonus cubes all over the map that you can smash.

600 Bricks - Driving around in your Mini Cooper, you’ll be notified that in order to get the LEGO Ferrari F40 Competizione you need to collect 600 Bricks. Once you do, you’ll have the car built for you, as well as unlocking the ‘Showdown’ race where you can race and win the real car and potentially win it.

1000 Bricks - There’s a bit of a gap between the F40 and the Senna. For 1,000 bricks you get a small single garage built onto the size of your normal LEGO house. You also get a Super Wheelspin where you can win vehicles, emotes or clothing, or just a whole ton of credits.

1400 Bricks - Another house extension awaits when you hit 1400 bricks, you’ll also get a voicemail from the announcer and this will begin the Horizon Story for LEGO Valley. This is called the 'Hype Tour' and is basically all about making people believe the LEGO Speed Champions cars in the game are real and showing them off. You get an achievement for getting 28 stars in this mode and will gather another few by working through them.

1800 Bricks - As we’ve covered in a separate article, you can now start finding Alien Cells at night and collecting them. You will also get a guest house added to your property delivered by the twin rotor helicopter that likes to drop new items of property or development onto your LEGO baseplate.

2200 Bricks - Another expansion to your property, from memory I think this adds room to the guest house built and starts turning it into a large mansion. You get another super wheel spin at this point and if you’re lucky you’ll add some more to your car collection.

2600 Bricks - The next major milestone in the Speed Champions expansion, you’ll now be given an all grey McLaren Senna as a reward for collecting this many bricks. I’d say this many bricks will probably take 3-4 hours of gameplay. Focus on races and easy challenges and you’ll be okay.

3000 Bricks - I’m not sure why, but you’ll have a full 5 a side football pitch delivered here to your property. You’ll also unlock all of the Alien Plants across the map to smash into and collect, which finally gives you the ability to unlock the achievement in relation to alien debris.

3500 Bricks - The LEGO gods will give you a swimming pool and cabana to go next to it. At this point your LEGO house is starting to become a Scarface style mega estate. Another Super Wheelspin awaits as well.

4000 Bricks - Another major milestone, you’ll be granted Master Builder status. You get a pond and a cabin for your property and the 1974 Porsche 911 3.0 barn find is revealed. As of July 2019 this is unfinished and finding the barn just tells you to check back soon after giving you the parts, but we are very convinced on what the vehicle is going to be here at Speed-Champions.

5000 Bricks - From here on up, you’re going to have to be getting good at your challenges and knowing where to get the bricks from. Your LEGO estate now gains a biplane in the grounds and you will unlock the ‘Goliath’ race. As we spoke about in the achievement guide, this is a long winding race through the whole of LEGO Valley in which is pretty much the challenging of the expansion in terms of single races.

6000 Bricks - Out on the water you’ll now gain your own James Bond style super yacht. If you go into photo mode your house is starting to look extremely impressive at this point. As you can expect from one of the non-major milestones, another Super Wheelspin awaits.

7500 Bricks - LEGO fans will love this. Jurassic Valley comes to life and you get to interact with a dinosaur. The less said on this the better as I don’t want to ruin the good surprise that’s in store if you’ve worked all the way to having this many bricks.

9000 Bricks - Another 2,500 collected bricks and at this point you are going to be well into the very hard challenges and demonstrating your skill. Similar to at 7500, you’ll get as good surprise but needless to say there are some Unidentified Flying Objects that may get a bit to close to comfort to your estate.

11500 Bricks - Only the two major milestones await. When you hit this many bricks you will unlock the LEGO Speed Champions Finale. Complete these to win heavy credit prizes, rank up and start completing the last few achievements and challenges in the expansion. A lot of game time is required to get to this level, and there will not be much to explore once you’ve completed this.

12500 Bricks - If you’ve got this, you’ll know you get the LEGO Winner’s Trophy. You’ve completed LEGO Valley and will have played many hours of this Forza Horizon 4 expansion. Only the best and most skilled Forza players will hit this achievement, getting the Winner’s Trophy and seeing the final cutscene in the expansion. There’s still some content to come in the rest of 2019 and some extra cars, but for the time being, rest easy - you’ve completed it.