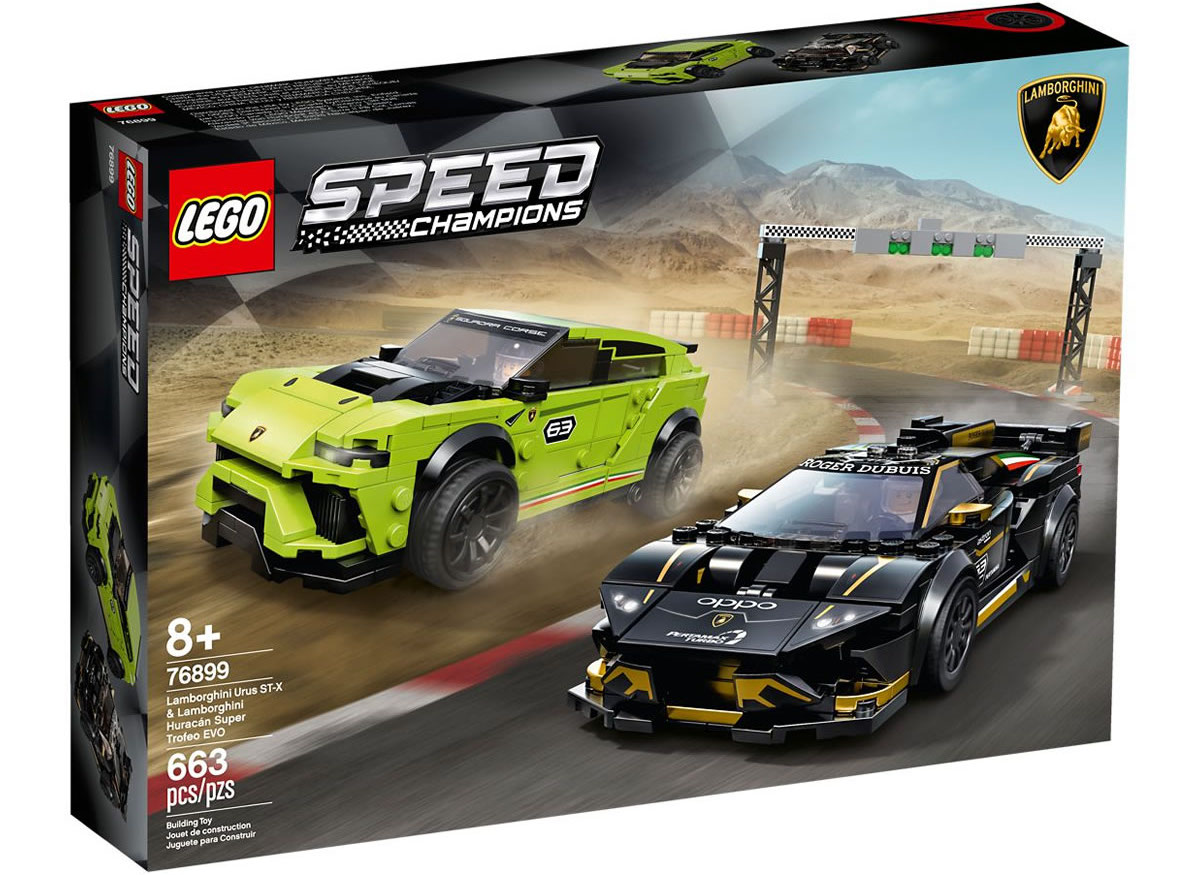 The box art for the Lamborghini double pack, featuring similar look to the Willow Springs race circuit in the USA, showing the Huracan racing on-road alongside the Urus ST-X racing off road.

Today we've had our first official images of the 2020 Lamborghini Speed Champions set 75899 featuring the Huracan Super Trofeo EVO and Urus ST-X, along with an extra image or two for the 76898 Jaguar Racing Formula E set. Both sets were initially announced in combination with the relevant race teams, with the Jaguar set announced at the start of October and the Lamborghini set towards the end. 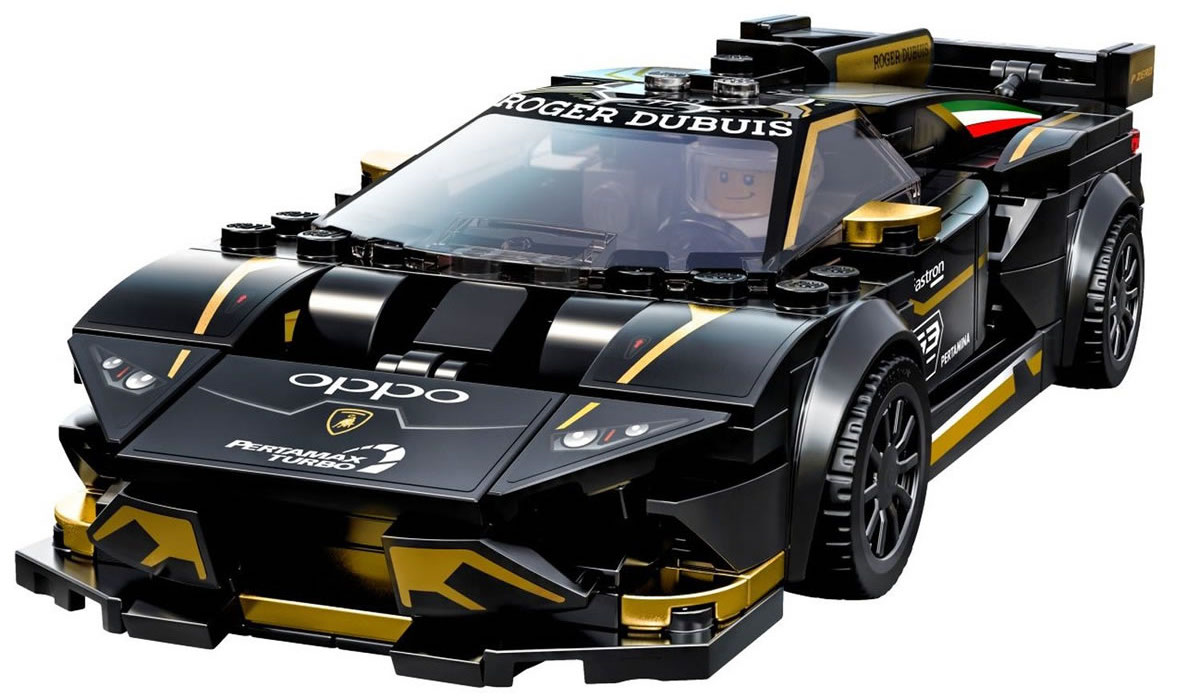 Having the box art available for both lets us confirm the final piece count for the two sets going on sale January 1st, 2020: 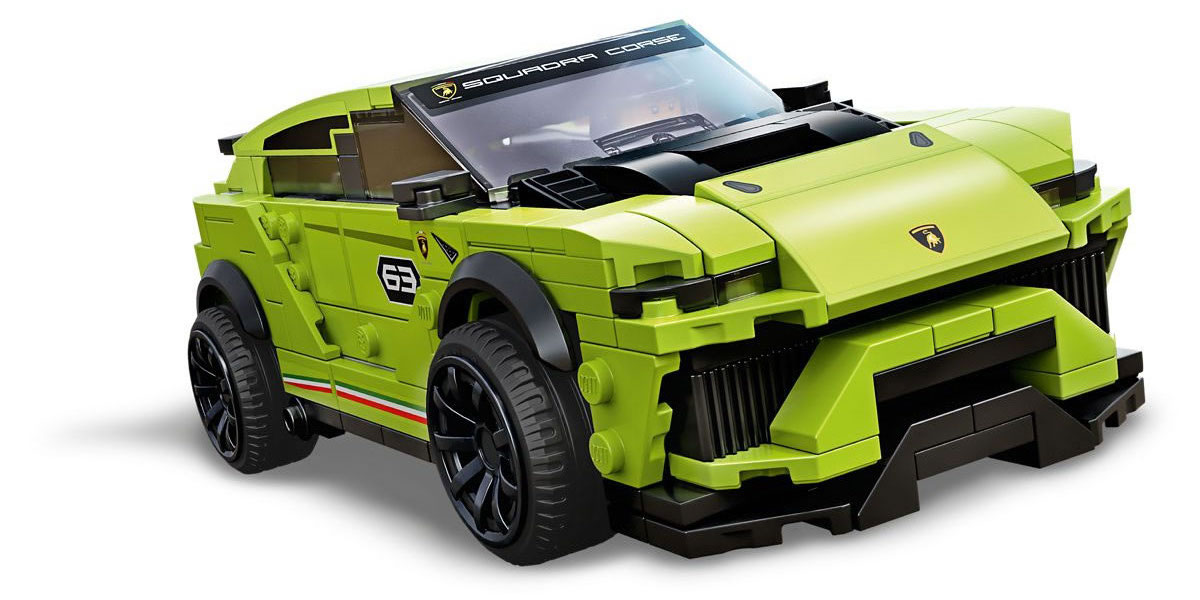 Our first real and properly visible product image of the Speed Champions Lamborghini Urus ST-X showing the aggressive front end detailing and the use of stickers across the bonnet and down the sides of the model.

The return of Lamborghini to LEGO (and it's first appearance in Speed Champions) is welcome, but it’s yet to be seen whether supercars fit the 8-wide stud model that Speed Champions is moving to. From the initial pictures that we reported on, then heading into these official pictures including boxes pre-release, our concerns remain about use of stickering in place of the use of unique bricks (such as when the Speed Champions McLaren Senna used a blade from Ninjago to replicate headlights). We're hoping we're not heading back to an era of blocky models that rely on stickers in order to look anything like the vehicles they were designed to be. 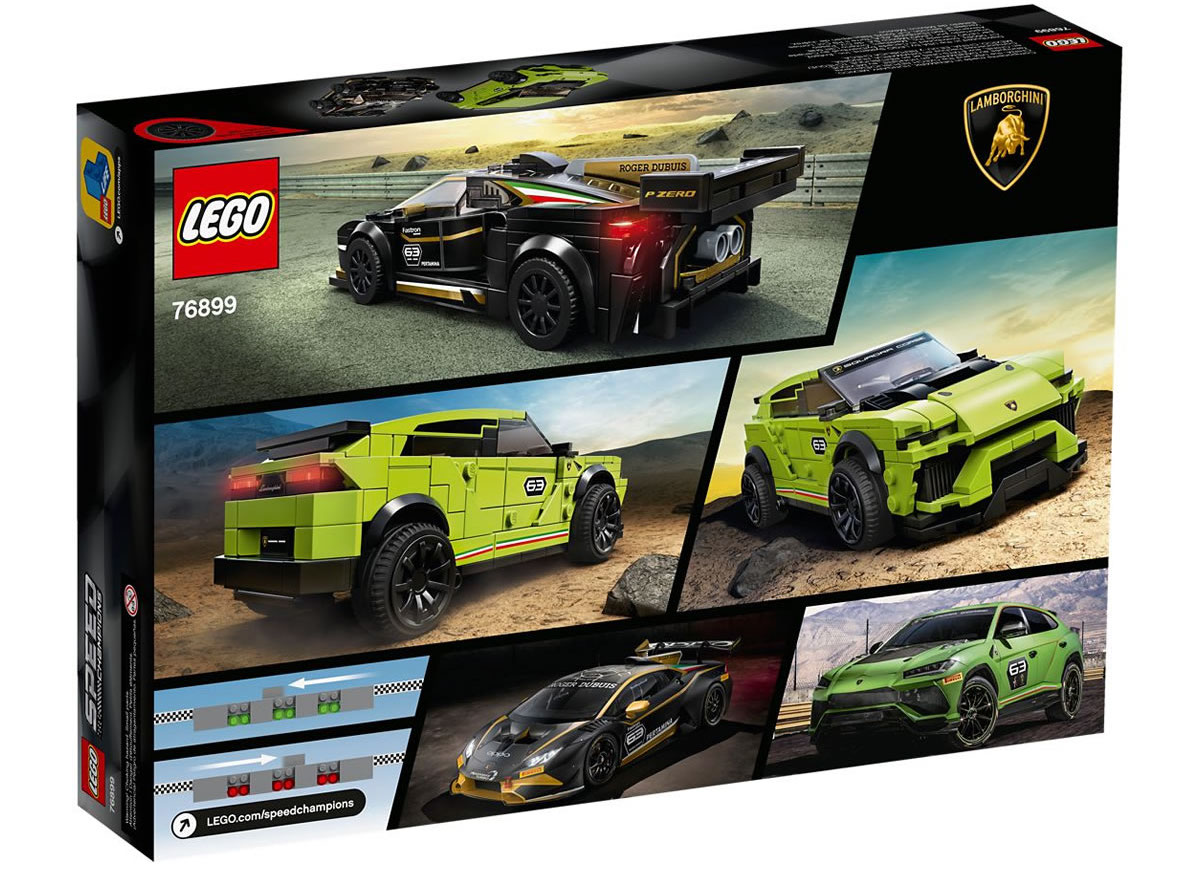 The back of the Lamborghini double set box gives us our first good look at the back of the models, the Huracan's twin exit central exhaust looks great.

These blockiness fears come from things like the height of the rear of these models. On the Huracan there are two plates worth of bricks above the arch, the Urus ST-X has a whole brick and plate built on top - this can make models look heavy, and more recently we'd seen lower, sleeker models. The rear bumper on the Urus is also relatively featureless which may not help, but there are nice details around the rear lights. The light 'effects' on the box, highlighting the lights, and making them look real is really neccessary given the tiny size of lights on modern cars (thanks to LEDs) and the knock on effect this has at Speed Champions scale. The Urus ST-X's off-road style wheels stick out significantly and feature new hub caps. These look like a new size of wheel coming to the Speed Champions range, but until we have the model in hand we'll hold judgement. The use of contrast black coloured wheelarch parts on the Urus, replicating the look of the real vehicle is a great touch. 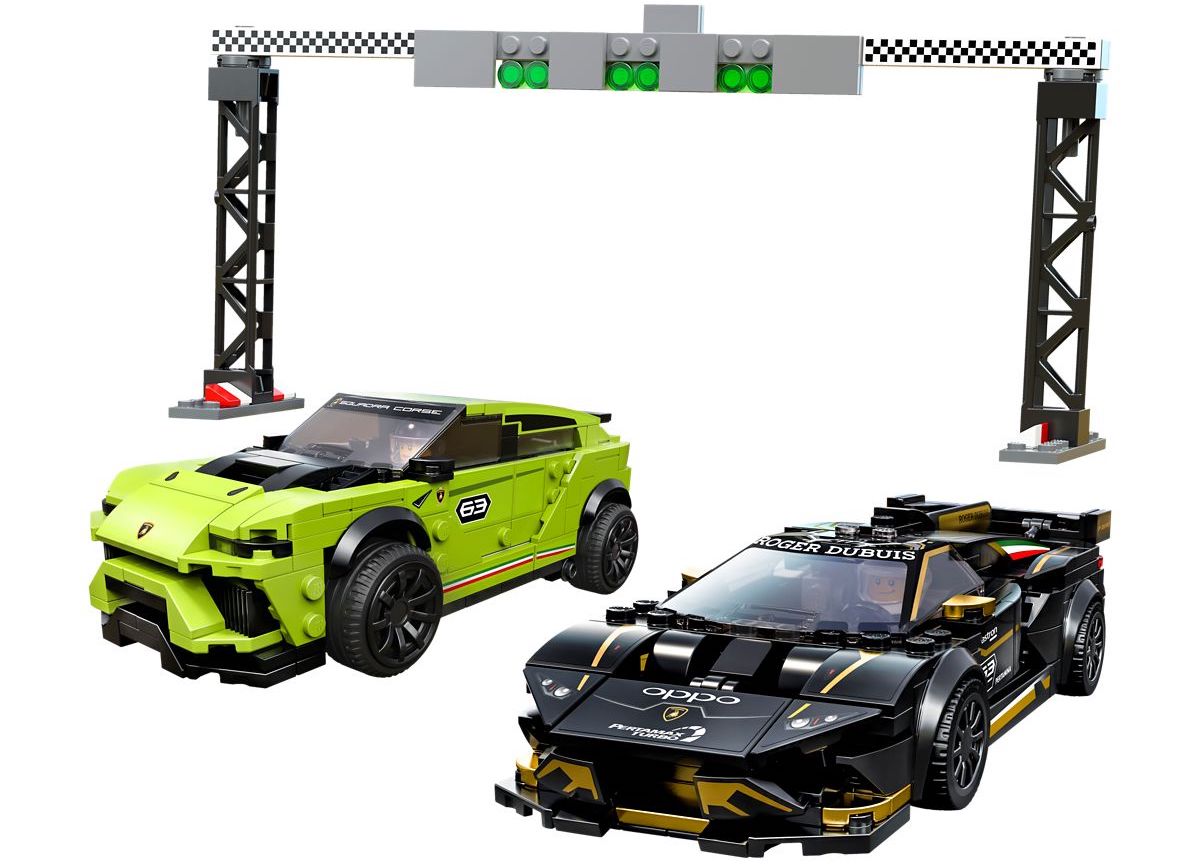 This artificial, composited photo of the Lamborghini set together includes the minimal Start-line gantry with a slide to go between red and green. LEGO are always keen to include play accessories, but this one is definitely forgettable.

Whether LEGO have changed their rendering of sets for box art slightly we're not sure, but the gaps between bricks seem very prominent on the Urus and detract slightly from it's look as well. The side of the Urus ST-X appears to be almost flat, with stickering used to provide a feature line under the windows and a transition to be a plate wider at the rear of the model. Overall with the two Lamborghini models we do seem to be seeing a return to more vehicle details being captured by stickers rather than built into the model, but it may just be that the character elements of these two vehicles were too fine to look good in brick. 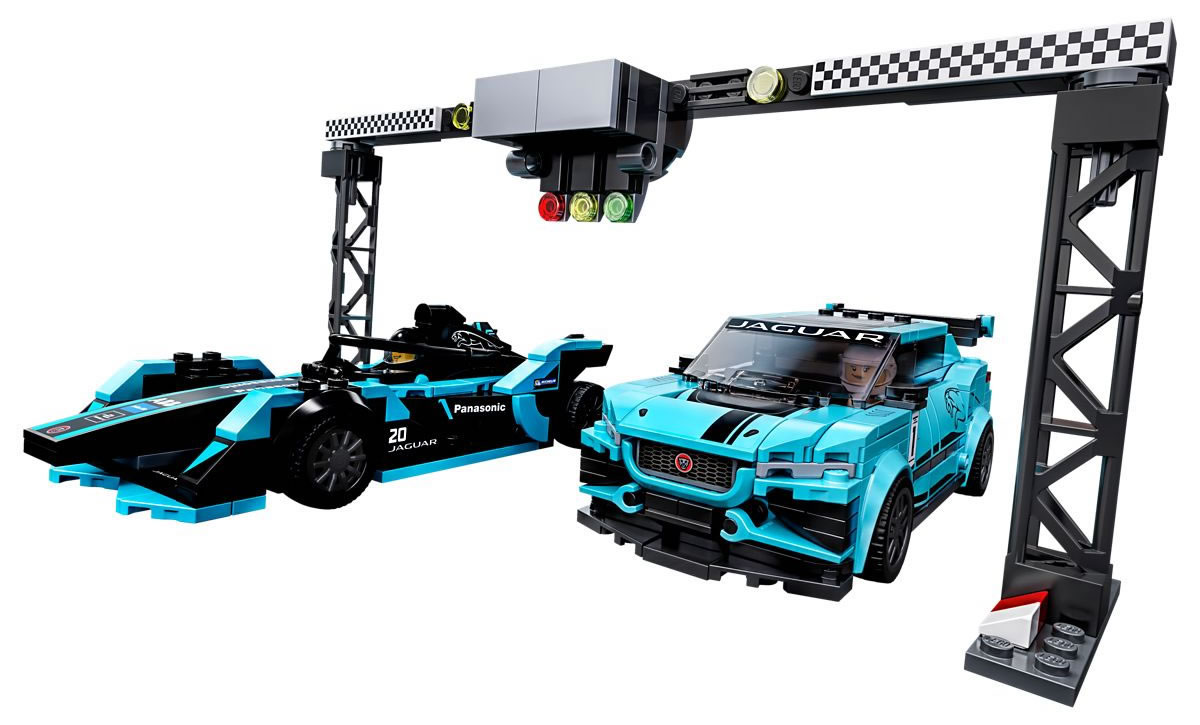 Twin model shot of the Jaguar Racing double pack, set 76898, showing a slightly more involved gantry set up than the Lamborghini set. Loving the turquoise/light blue colour scheme for this set but really want to see the proportions on these models in real life.

We've also seen a couple of new, higher resolution images of set 76898, the Jaguar Panasonic Racing Formula E double pack, including a close up of the movable HALO head restraint on the Formula E car. There's nothing too new here, the gantry reminds me heavily of the one from the Chevrolet Camaro double pack released back in 2016 and we got a good look at the set (including it's box art) when it was previewed with the race team. 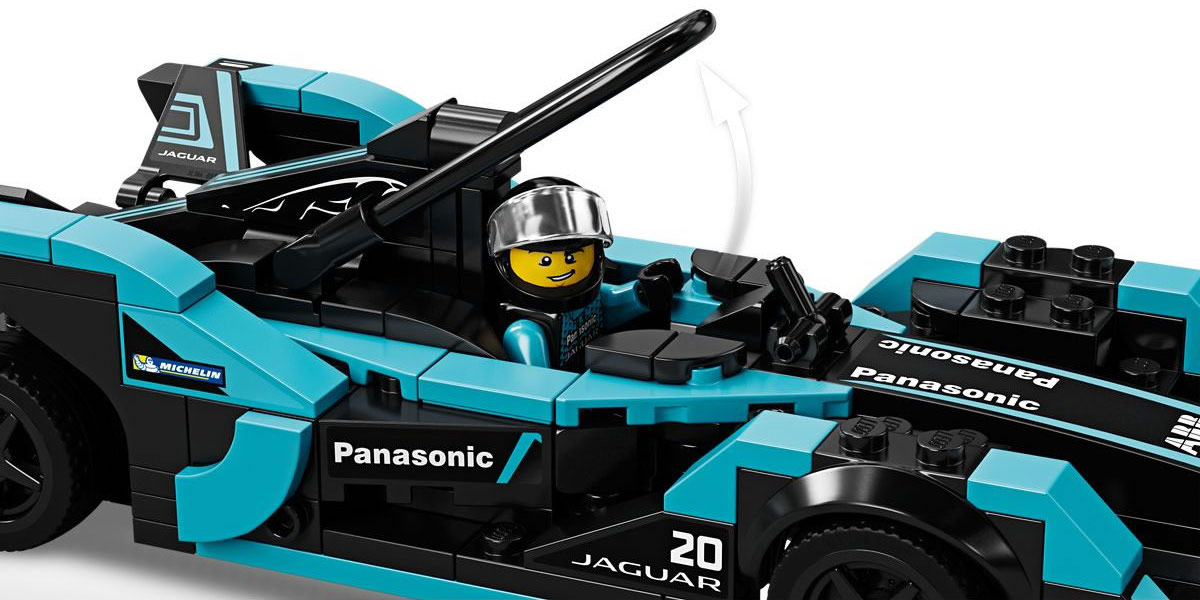 Showing off the movable HALO device protecting the driver of the first Speed Champions Formula-E model. Looking forward to potentially seeing the 8-wide take on a Formula 1 car, including a HALO like this on before long.

Our reaction to the 2020 Speed Champions sets announced so far is mixed. Whilst the arrival of Jaguar is a great addition for the brand (we'd speculated on the possibility of a Jaguar Formula E themed set), the fact that they chose two of the most generic models that seem to be based around current marketing does not bode well. When you had classic E Types or the XJ220 to choose from and seem to have been forced into a corporate decision to release an E-Pace, we're starting to believe that some of the creative flair and freedom from the range is being removed from the designers.

At the moment, a lot of comment is speculation, and we will of course be pre-ordering all of these models to actually have an objective look at how they shape up. If you're curious and can’t wait until 2020 to have a look at them, get on a Brick Marketplace or eBay and pick up either the Mini Cooper & Buggy set or the F150 (slightly more expensive) and you'll start to get a better idea of how the Lamborghini Urus and Jaguar E-Pace will look when they're released early next year.