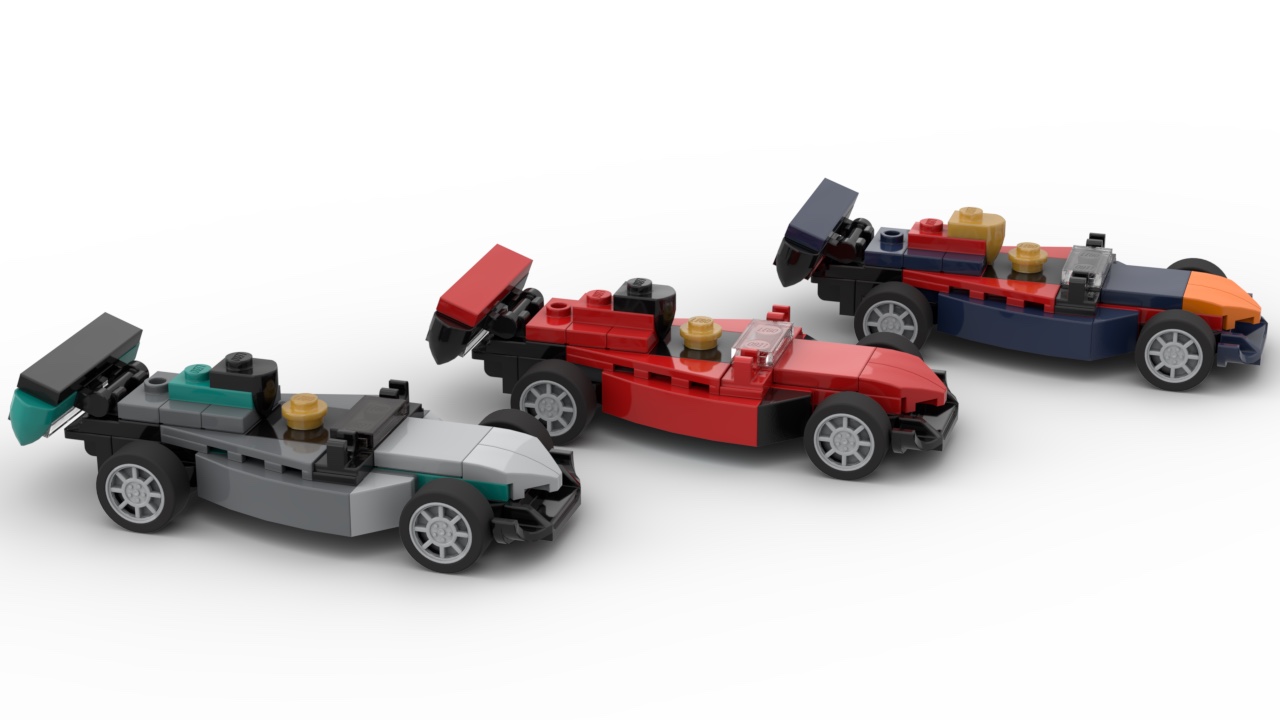 The red LEGO monthly Mini Model Build Racecar 40328 lining up with our MOCs representing the Mercedes-AMG and Red Bull F1 team liveries. Read on to find out how to build these MOCs.

If you've run out of sets to build, or just feel like a bit of a change from Speed Champions or larger Technic sets you'll be glad to know that this month's LEGO Monthly Mini Model Build for August 2019 is a Race Car, as set 40328. It's around 5-wide, way below the Speed Champions scale and uses just 49 pieces in 20 build steps. The model has a good resemblance to an actual Formula 1 car and is designed in a red and black colour scheme, vaguely reminiscent of Ferrari livery (although it's certainly no Speed Champions Scuderia Ferrari SF16-H!)

For those of you that haven't heard of the monthly Mini Model Build before, it's a program LEGO has run since 2009 with instructions for a small set build every month. In some countries, stores have days where you can come and build the model in store (maybe even for free). Other countries LEGO just provide online instructions and you'll have to get the bricks from Pick a Brick (or BrickLink). In some countries, the LEGO Store Calendar shows dates that the model can be built in store. For August, it's showing last month's Ice Cream truck on the 14th and 20th August, so you can probably build this race car model in store next month. 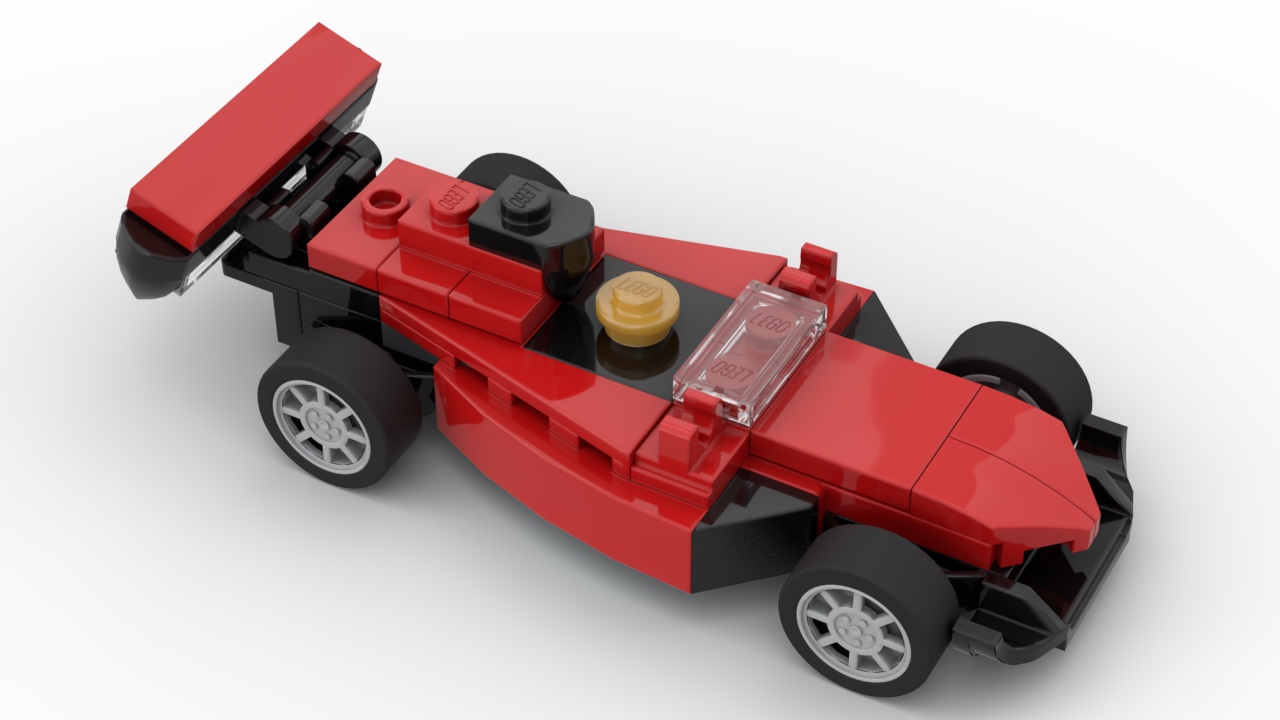 The LEGO Racecar 40328 in the red and black colour scheme from the instructions themselves. The model definitely has a Ferrari vibe to it.

On to the model itself. There's a great shape to the side of the model, the side-pods have been captured using a sloping front and curved piece, along with the plate surrounding the cockpit the model really tapers in like modern F1 cars toward the back and looks right. The wing mirrors and windscreen are done well, using two clips and a 1x2 transparent tile - no HALO here surrounding the cockpit, but it wouldn't really work with the scale seeing as the engine cover is only 2 plates high. A similar technique to the Speed Champions F1 models is used to go down to 1 centrally aligned stud at the back of the model, which looks great and there are good proportions with the length/width.

There's a very small diffuser tucked away at the back, with two hollow corner pieces back to back. We've seen more elaborate versions of this kind of diffuser on full size Speed Champions models, like the Mercedes-AMG F1 cars. The front wing is a single piece, chosen well and has enough detail to give the model the right look at the front. The combination of the sharply pointed, but wider nose and upturned front wing looks great in different colours too, as we'll see. The rear wing is hinged from the back of the body, allowing some play with the model which is cool. 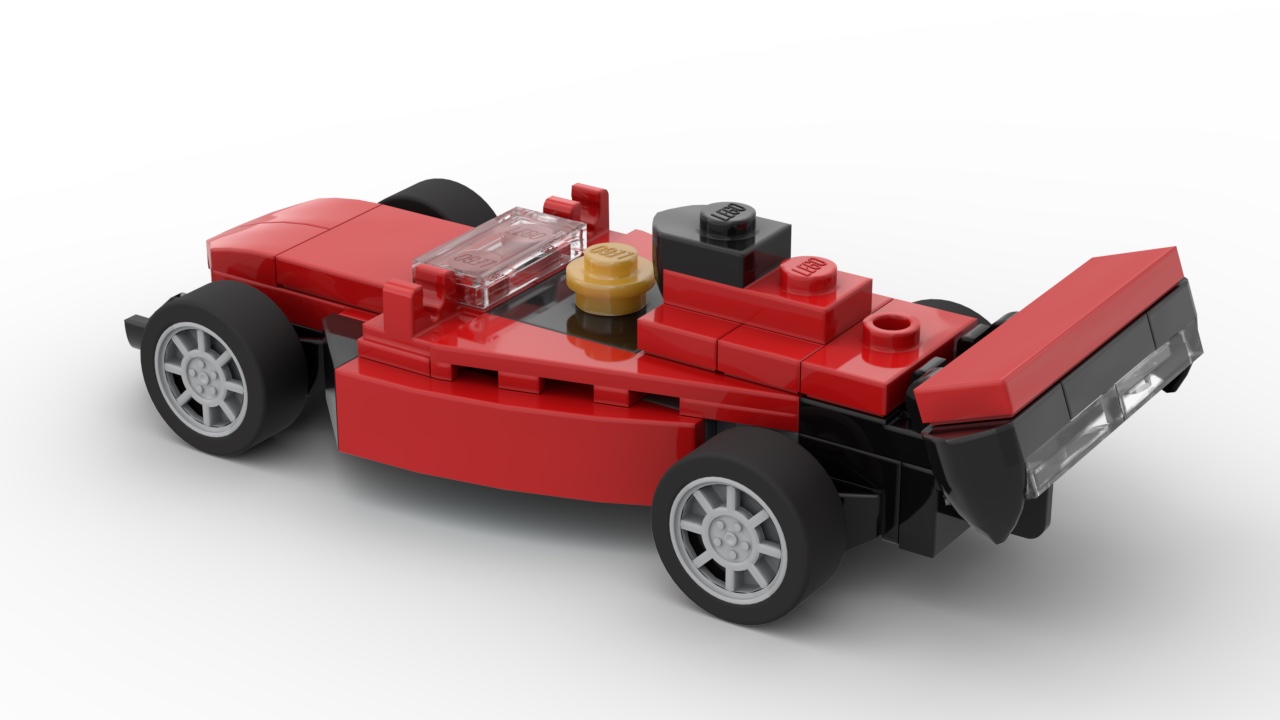 The back of the LEGO Racecar 40328 in its original colour scheme. The transparent bricks below the rear wing add some complexity without making the rear wing look too thick. There's also a small diffuser tucked away under there.

There aren't too many studs visible on the final model, four by my count which gives the set an almost model car feel. The two clear plates used for the bottom of the rear wing make sure the wing looks detailed, without being too blocky. The curved plates used for the Wing endplates and the top of the engine cover are the limiting factor for MOCs of this set, as they only come in around 10 colours from LEGO (at last check of BrickLink at least). 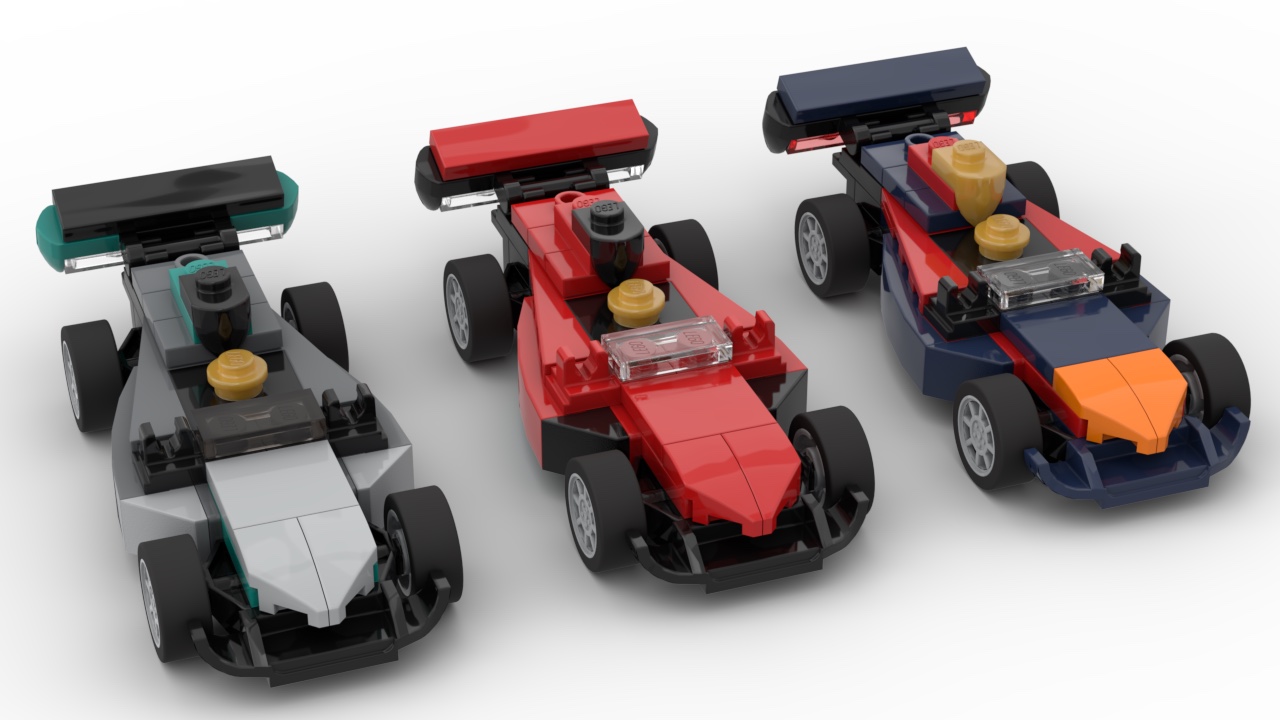 Our two MOCs of set 40328 - the Mercedes-AMG and Red Bull F1 cars alongside LEGO's original mini model creation. The orange nose of the Red Bull really stands out in this crowd.

Given our recent look at building MOCs using BrickLink Studio, we thought it'd be interesting to try building some other liveries for this great model. Studio makes it straightforward to identify what colours we have available. With so few pieces making up this set it's easy to tell which liveries are possible and which aren't - a lot of the pieces with limited colour availability are in black, which luckily matches a lot of the details on real Formula 1 cars. All of these MOCs are built using BrickLink availability, so the pieces are definitely available in these colours and the sets can be built. No faking here. 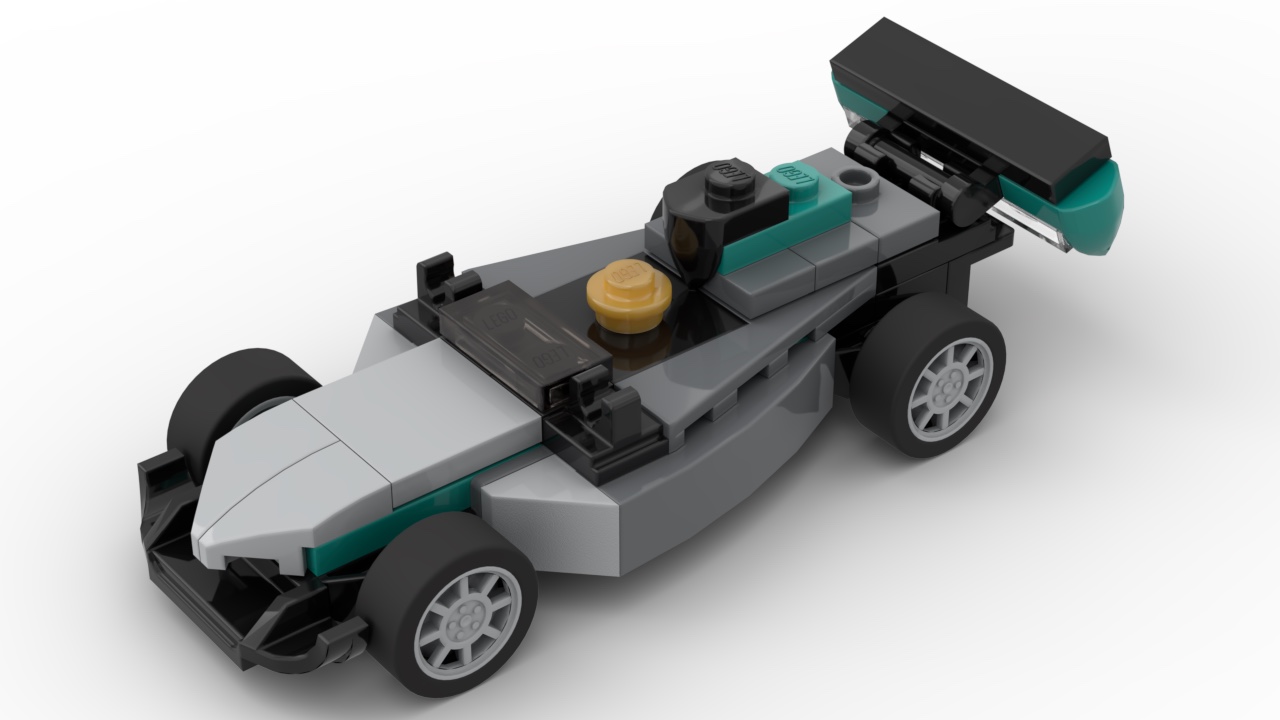 The LEGO Racecar 40328 MOC for Mercedes-AMG F1. There's lots of choice of light and dark grey components to swap onto the model and the turquoise caps are spot on for the Petronas branding - unlike the green used on some first-party Mercedes-AMG F1 LEGO models!

First off we decided to try the current championship leaders, Mercedes-AMG. The livery is a light to dark grey, with some black elements and bright turquoise sponsorship from their title sponsor, Petronas. Luckily the wing endplate and engine cover curved plate is available in a bright turquoise colour and using these does a great job of capturing the Petronas sponsorship. The rest of this model is mostly a case of picking various shades of light and dark grey from front to back, the black front wing matches the F1 car well and we used a black tinted windscreen to match in with the black wing mirrors. I really like how this one turned out and compared to LEGO's original red build it's definitely more striking. 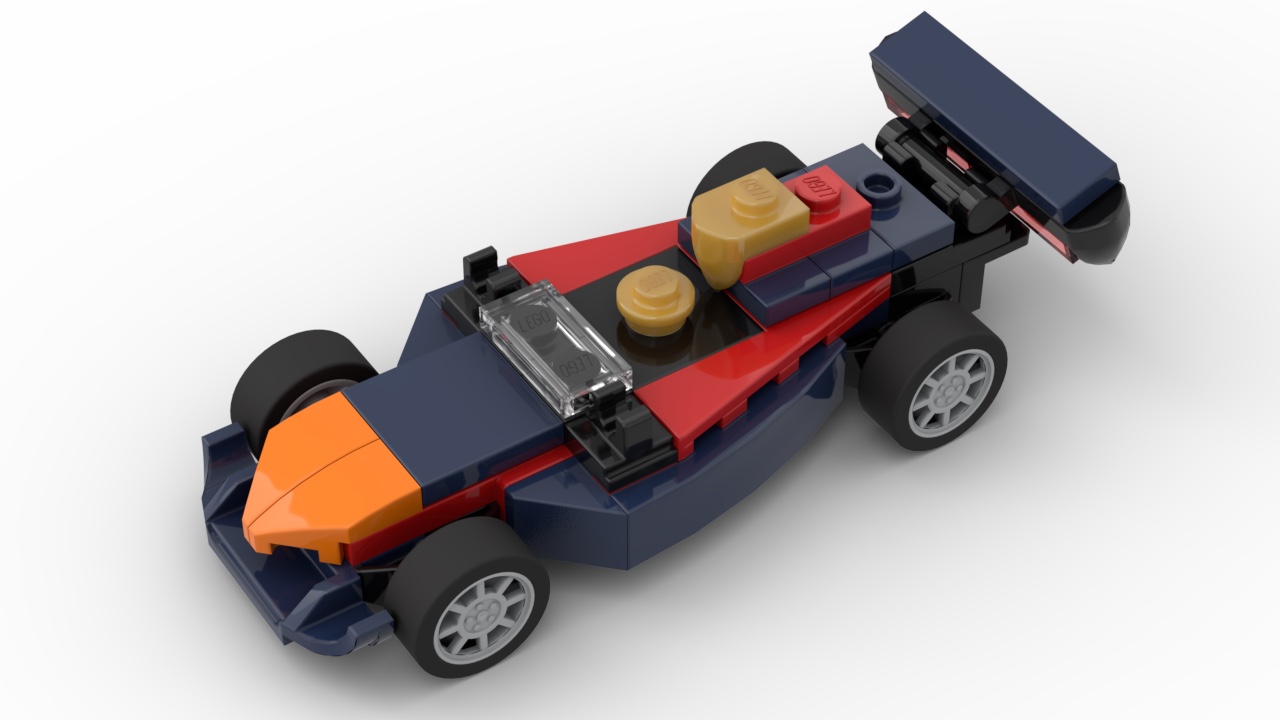 The LEGO Racecar 40328 as a MOC in a Red Bull livery. Luckily LEGO Dark Blue looks about right for this scheme and there are enough smaller red elements to get the look right.

Moving on to the other team of the big 3, Red Bull, we had more of a challenge. First off, LEGO do make a lot of components in a dark navy blue (including that unique front wing piece) that's perfect for Red Bull which made this model possible. The rest of the set was a balance of adding small red elements to represent the Red Bull sponsorship on the mainly blue car without having large patches of red in awkward places on the finished model. The model ends up looking great, with a red line through the set from the nose and surrounding the cockpit, on to the engine cover.

Red Bull's 2019 F1 livery has a dark yellow/orange nose which we've managed to replicate on this model, unfortunately as it's not available in the curved plate used for the engine cover we had to use a Gold colour instead. This at least matches the gold round 1x1 used to replicate the Drivers' head. We've also used red transparent bricks under the wing, as the endplates aren't available in red - probably the one thing that lets this model down.

If you're interested in following our guide to MOCs and doing some virtual mods, you can grab the three models above in our Mini Model Build 40328 RaceCar Bricklink Studio file (.io). We'd love to see what's possible for other F1 team liveries or historic liveries, so let us know if you build any interesting MOCs of this set. Manufacturers like Renault (with their yellow/black) and McLaren (orange/blue) would probably be relatively straightforward, but I'm sure there's possibilities we're not thinking of.