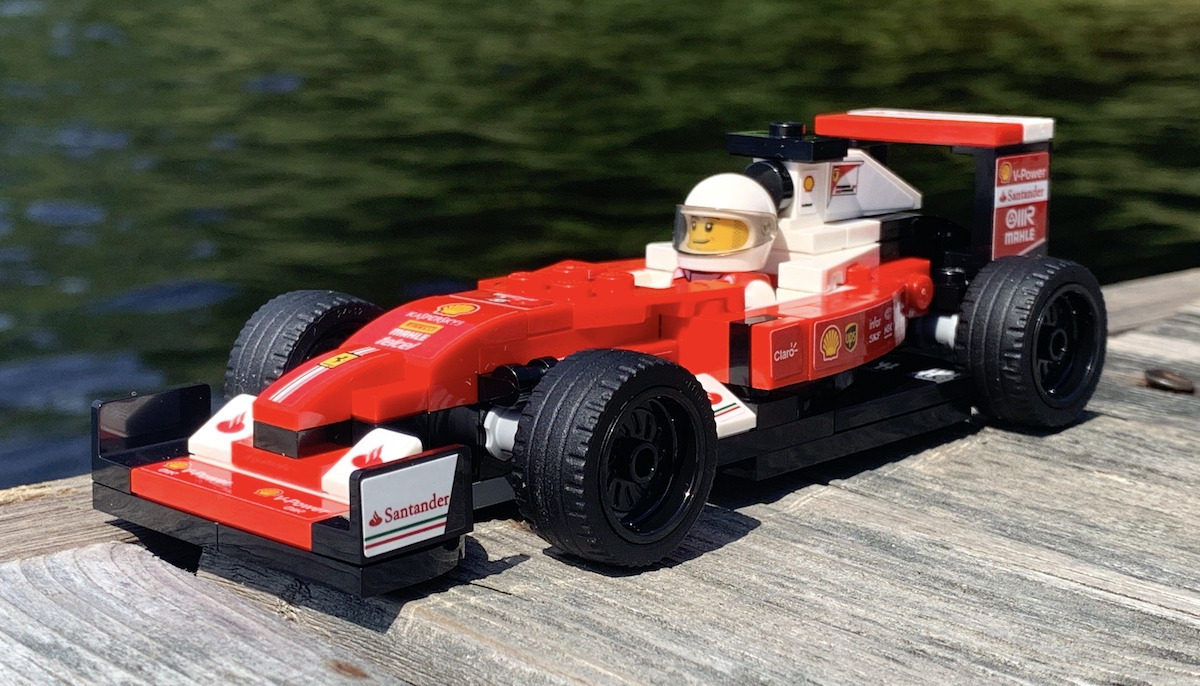 The Speed Champions 2016 Scuderia Ferrari SF16-H set 75879. We made this set up with the #5 sticker to represent Sebastian Vettel's car.

Continuing our Formula 1 theme, coming off the back of our review of the 2017 released Mercedes-AMG F1 team set 75883, we're covering the single model set of it's rival - the Scuderia Ferrari SF16-H, set 75879. The H in the name stands for hybrid, the 2016 World Championship season being part of the turbo hybrid era of power units and Ferrari keen to emphasise this after the previous KERS systems. It's great that LEGO managed to release both sets to cover the F1 fanbase (Sorry Red Bull fans!) - given the Ferrari was released as a single set I actually think LEGO managed to cram more detail and energy into this 184 piece single model than the larger, 941 piece Mercedes team set.

Apologies in advance for anyone who just wants to read about the Ferrari car model by itself - we found this model way more interesting to discuss in comparison with the Mercedes-AMG W07 Hybrid model, so we'll be discussing that. We don't have the very early McLaren Mercedes Pit Stop right now for comparison, but we'll definitely do a three way comparison between the sets when we do! 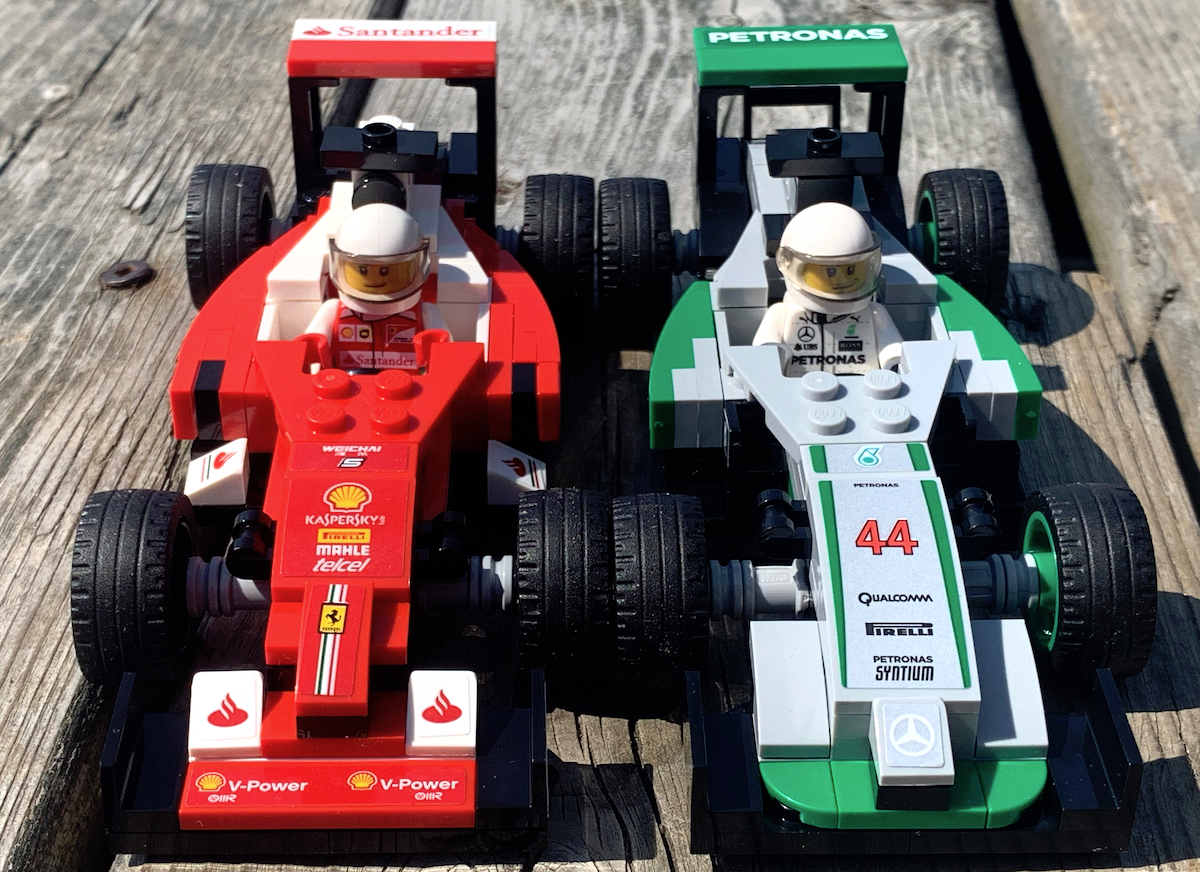 The model itself is of Sebastian Vettel's car, as it's wearing the race number 5 on the box. As a nice easter egg the set actually includes the race number 7, so if you're a big Kimi Raikkonen fan you can actually change it over to his car if you want - we built the Vettel model to complement our Mercedes-AMG Lewis Hamilton build, shown above. The model has a great variety of sponsor licences and looks detailed as a result, covering Shell, Santandeer and even Hublot sponsorship on the running boards of the car, facing upwards - a neat touch.

With the way Ferrari and Mercedes' livery has evolved slowly over the last 5 years or so, these two 2016 models could almost be substituted for the 2019 season cars, except for the absence of a Halo around the cabin, introduced in the 2018 season. We've seen some fan builds using a flexible piece bent using hooks to simulate a Halo - we're still waiting to see LEGO's approach to it and have our fingers crossed for some new F1 themed Speed Champions sets this year. 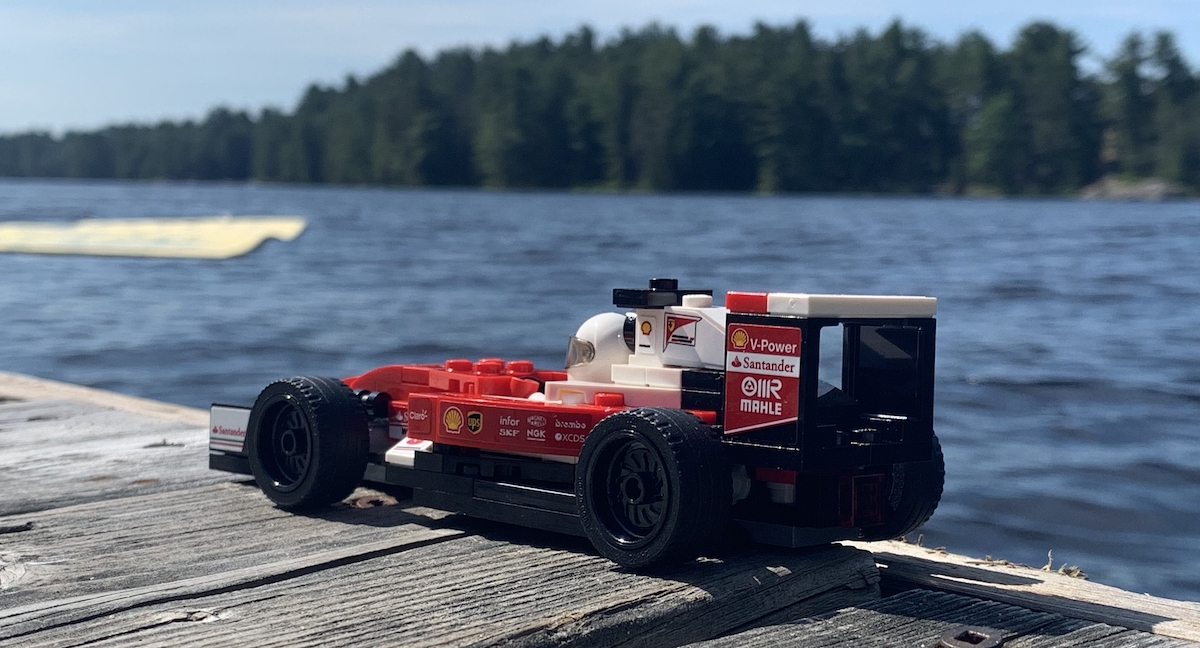 Fully black wheels due to the lack of wheel rims in this set. It's an odd look given the real F1 car had silver rims and LEGO clearly had the parts available, given their inclusion in the Mercedes-AMG F1 set of the same vintage.

Side by side with the Mercedes-AMG model you can see a much longer body of the car, coming nearer to the rear wheels and a longer floor. The nose of the car is higher on the Mercedes too, with the Ferrari model having a much more complex tapered nose with elements coming forward from the body behind the front wheels and two ramps providing aero detail. The front wing is slightly less complex on the Ferrari, lacking the curved flat pieces and gaining sharper ramps that don't overhang the wing itself - the Santander sponsorship on the ends of the wing are great though, the Mercedes leaves this area blank.

The Ferrari model also has some nice touches at the back, a two-colour rear wing section with red and white and a rain/MGU-K charging light at the back. The rain light does remove some diffuser details that are present on the W07, but it's a decent trade off I think for the overall look of the model. I think the longer body of this car actually makes the car look more F1-like and as a result, the set more impressive to look at. 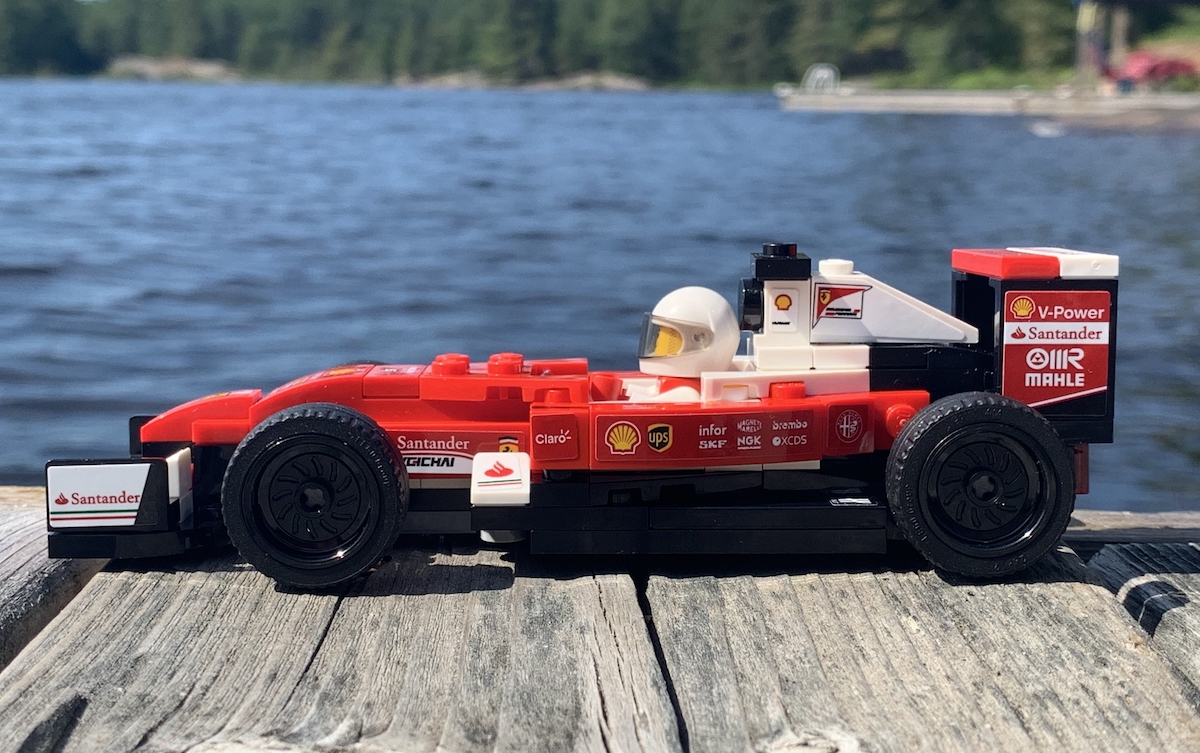 The side profile is great and really shows the effort LEGO went to licensing as many sponsors as possible. This definitely adds a bit more realism over the relatively simple liveries from the Mercedes-AMG F1 set

If you're not a sticker fan, or you struggle to put them on straight (don't we all), then this model is going to drive you a bit crazy - due to the thin profile of the model, how straight the stickers go on is really obvious. We tend to just let it be - acknowledge that they're hand built LEGO models not die-cast replicas, and that crooked stickers is all part of the charm, but if you struggle with this you'll have to be really careful with them.

The lack of wheel rims on this set is a bit of an oddity, the Mercedes set comes with two variants of dark silver wheels and the real life Ferrari F1 car actually has silver wheels in a lot of shots. My best guess is that the designers didn't want to introduce another colour to the set, given the red/white/black contrast and chose to leave them off. It would have been nice to have the option by having them in the box, given the number of spare parts you typically find in there anyway after building a Speed Champions set. 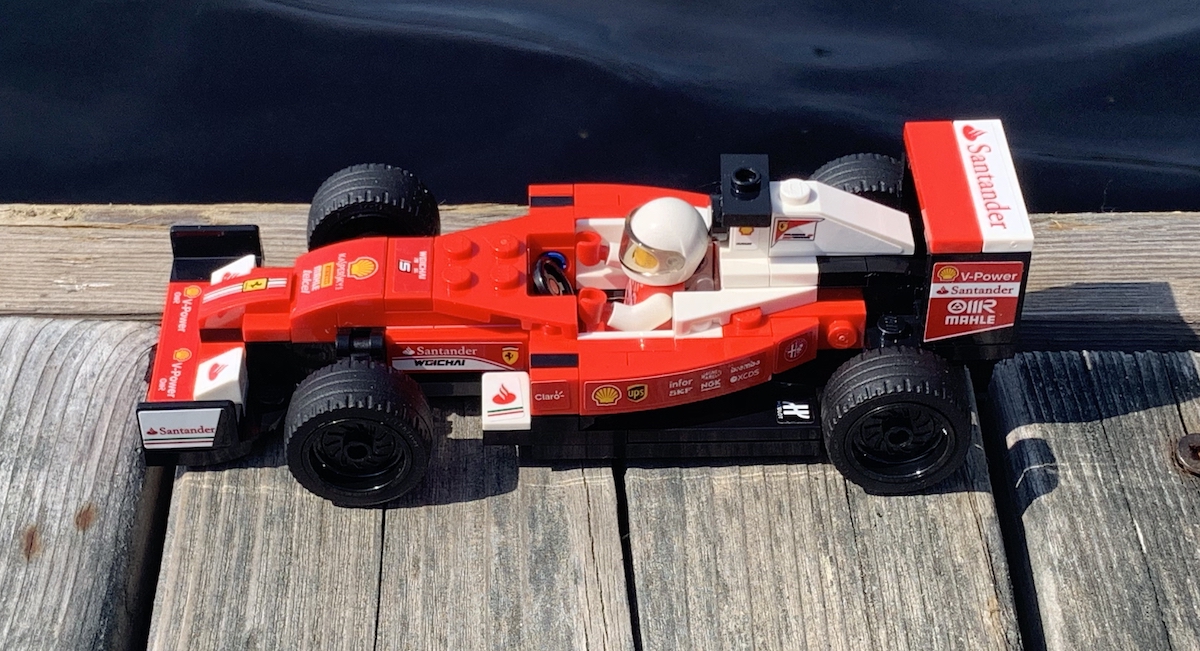 Top down on the set you can see some of the black contrast touches and the Santander-logo'd white ramps ahead of the sidepods that add more aero detail to this model. This is also one of the few angles you can see the Hublot sponsorship on the floor of the car, another detail touch with the sponsorship.

The accessories on this set are minimal, given it's a single car and was a cheaper set when released. It comes with a very small pit-wall setup, with the Scuderia Ferrari logo, a set of starting lights and a checkered flag attached. There's even a very small piece of kerb made of three red and white ramps. It's a nice tradeoff to make the set more fun to play with for kids, but if you're a more die-hard F1 fan I'd suggest getting the Mercedes set too to give you a podium and a lot more F1 related surroundings (never mind getting hold of the car's natural competitors models!)

Given Sebastian Vettel's wore a LEGO themed helmet during the 2019 F1 season, at the Spanish Grand Prix, I'm still hoping with LEGO and Ferrari's tight relationship there's a chance of a 2019 SF-90 model this year. However, with the season rolling on and coming to an end around December, it might be that we only see it next year. Here's hoping - I'd really like to see what the current Speed Champions team at LEGO can do in the way of F1 cars.

While it wasn't the most successful car in period, the Tifosi (Ferrari fans) always have love for the Scuderia Ferrari team and this model and car are no exception there.

Overall: 90 (How we rate sets and models)

The rating for this set is strong - driven by it being a great model to put on display and the level of detail LEGO put into the sponsorships and aero work on the car. The build aspect was let down slightly, probably as we'd just built the two Mercedes-AMG cars and were a bit fatigued of the F1 build - It's a minimal set so there's not too much complexity there and the accessories aren't challenging.