We spotted the image below, with the flank of a Mercedes-Benz AMG GT with a LEGO Speed Champions logo in the build instructions for the Ferrari Ultimate Garage a while ago. Given we've recently released our review of the Mercedes-AMG GT3 set 75877 that this trip promoted just over two years ago, we thought it'd be a good time to pull up this video and promotion from Mercedes-Benz and LEGO archive. 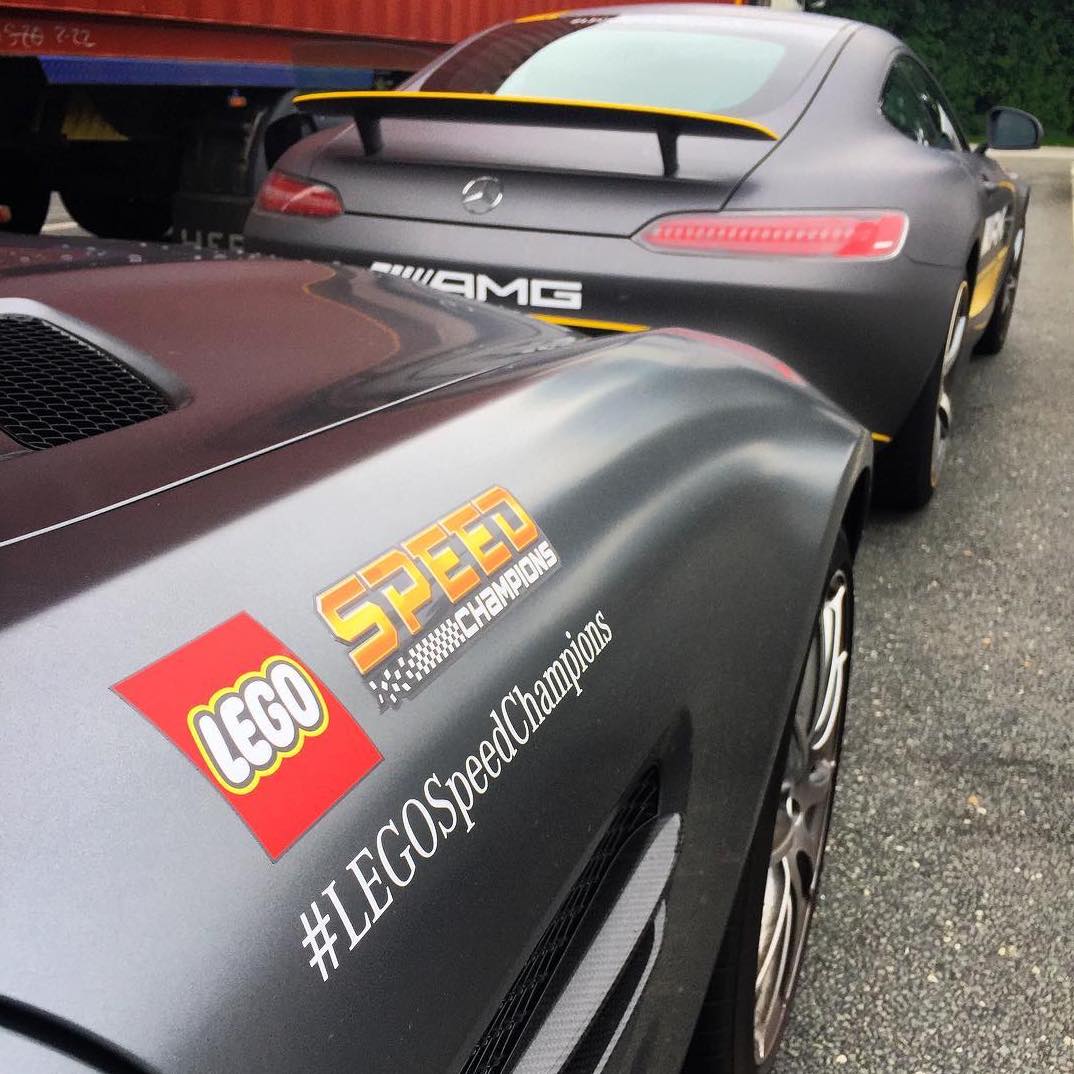 The pair of Mercedes-Benz AMG GT cars with yellow stickers and LEGO Speed Champions logos that were driven from the Nurburgring 24H Race to the LEGO Headquarters in Billund, Denmark. Image © craigc via Instagram.

We did some digging on this trip, as a lot of the social media posts on Instagram and Facebook aren't well promoted. From GT Spirit, there were actually two AMG GT's on the roadtrip along with a Mercedes-Benz GLE63S.

Mercedes wrapped an AMG GT in the same livery as the Speed Champions car. Together with another AMG GT and a GLE63S our journey begins.

The trip began at the Nurburgring 24 hour race and had a drive to LEGO Headquarters in Billund. They even brought a minifig along for the ride and put it in the model at Billund, which is pretty cool. Obviously the Speed Champions model is of the real Mercedes-AMG GT3 car, but making the trip in the production street car, the AMG GT makes a lot more sense. The cars used for the trip had vinyl graphics applied to better resemble the Speed Champions model. 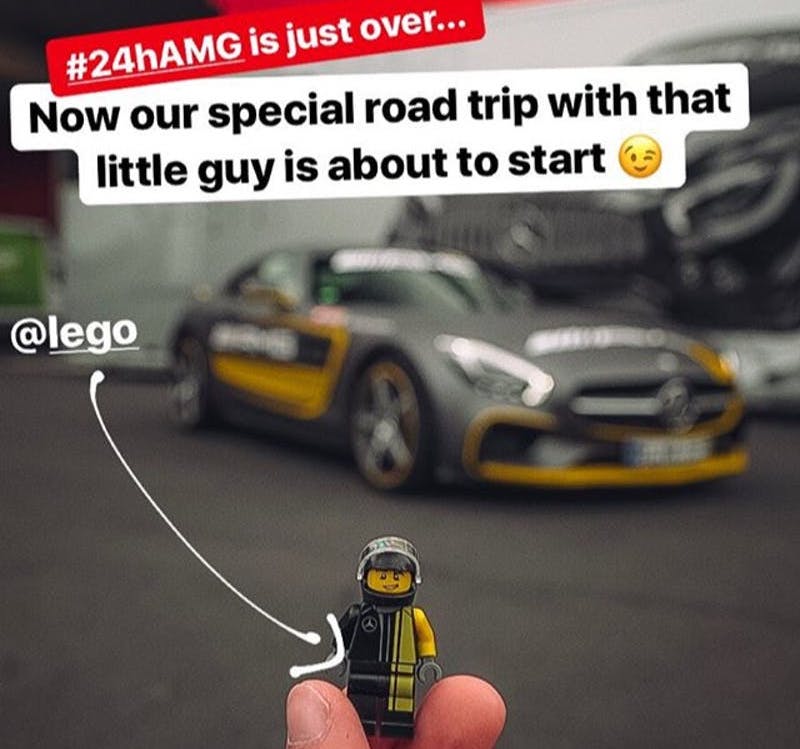 This minifig of a Mercedes driver made it along in the AMG GT for the trip from Nurburgring to Billund. Image © Mercedes via Instagram.

In the video we've reposted above from Mercedes, Craig Callum talks about designing the AMG GT Speed Champions model and why it was a good choice for the range. There are some good insights in the video and it's worth a watch. When LEGO design the cars they look to replicate the iconic features of the car, working from pictures and trying to capture the overall proportions. Craig emphasises how the AMG GT especially is a proportions based model - we commented on this in our review, the long hood/bonnet gives it a unique look amongst other Speed Champions sets.

There's also some discussion of the alternate front that's part of the Speed Champions model - this is referred to as the 'low downforce' front. We didn't fully appreciate that a combination of the low downforce front and removing the rear wing from the model is meant to represent the street vehicle, so that's a nice touch. 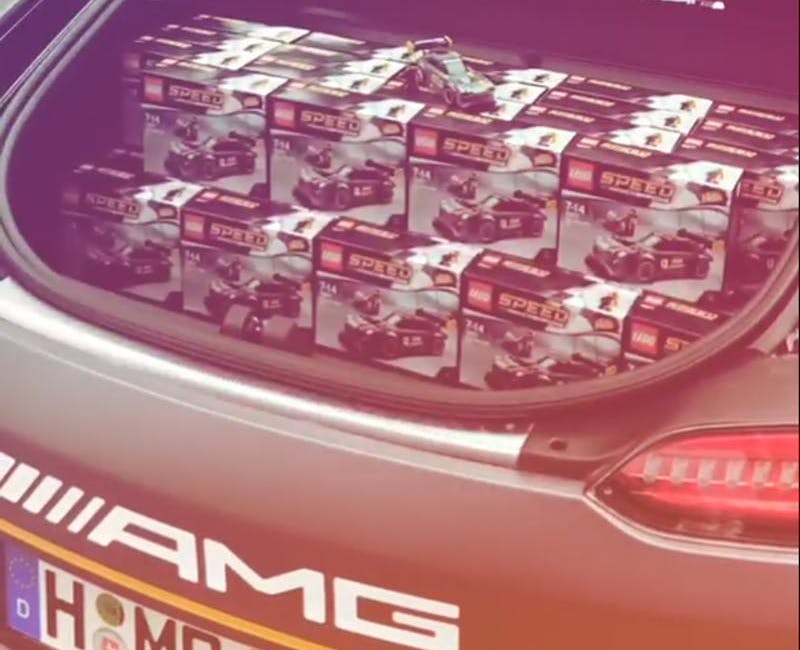 How many LEGO Speed Champions Mercedes-AMG GT3's can you fit in the boot of a Mercedes AMG GT? Looks like quite a few... Image © Mercedes via Instagram.

Another point that's emphasised is around the Speed Champions line's use of standard LEGO bricks. As fans, we appreciate the art of creating a model that captures the essence of the street car while also still feeling like a LEGO model, rather than a replicate of the original car. The more recent interview with the latest design manager, Christopher Stamp, talks about this, and mostly avoiding the use of custom pieces. A great Speed Champions model balances the car's shape with a LEGO identity - we love seeing these models and clearly both of the people that have been in charge of the line have a great respect for it. If re-living this tour has you thinking about adding a Mercedes-AMG GT3 to your Speed Champions collection, make sure to check out our review of this set.