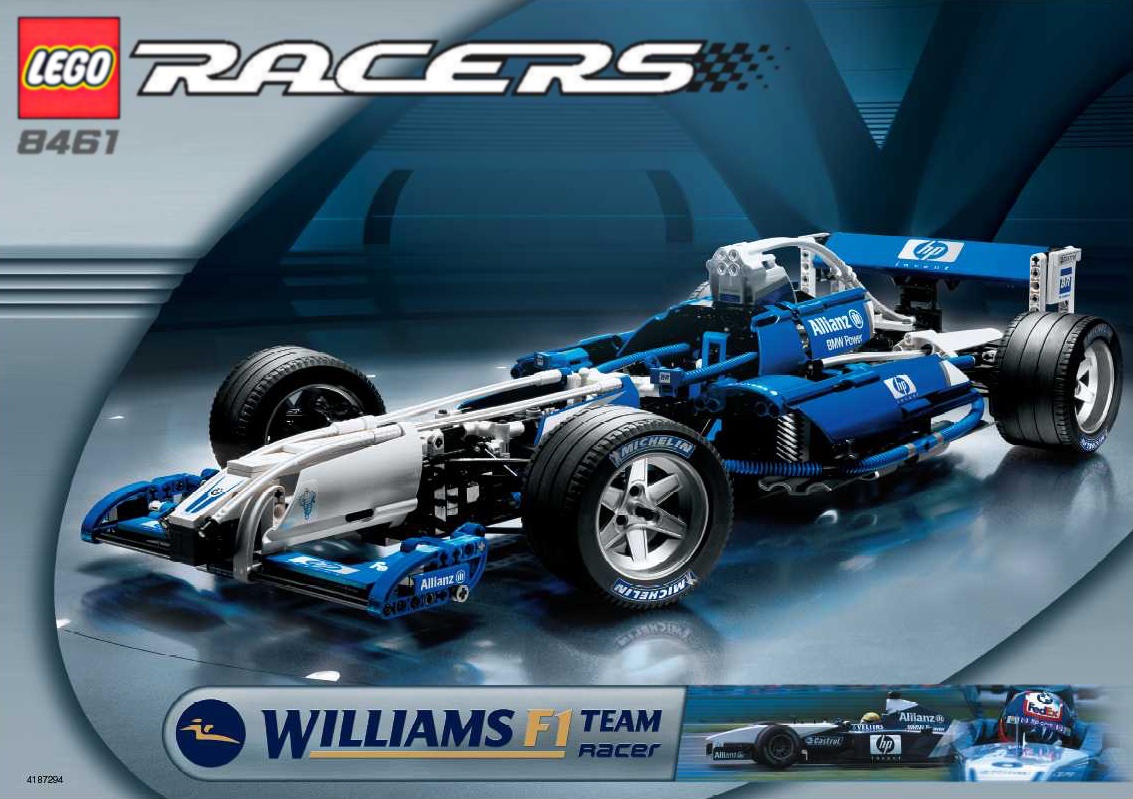 The LEGO Racers WilliamsF1 Team Racer 8461, the most famous and (almost) the most collectible LEGO Williams F1 set. Read on to find out why.

As usual, we went digging for interesting LEGO licences to do with cars and motorsport, and turned up this interesting link to the Williams Formula 1 team, back from 2002-3 when the team used BMW engines. This is also the only BMW car related tie-in from LEGO so far, excluding an odd polybag set that we'll be covering soon, with only collaboration to date being the BMW R 1200 GS Adventure motorcycle in 2017.

LEGO went through a period of doing large scale Formula 1 cars in the early 2000s, most notably starting with the Silver Champion 8458. The most significant Williams F1 set, the LEGO Racers 8461 Williams F1 Team Racer, is basically a re-skin with stickers of this Silver Champion set. The Team Racer was released in 2002 at a retail price of £99.99/$129.99 and is currently selling close to $900! The set had 1484 pieces and featured a working V10 engine, air shocks and even Michelin branded tyres (completely unique to this set and the dealer-only edition mentioned below).

The car itself is based on the the Williams F1 FW24. The FW24 was originally raced early in the season with Compaq instead of HP on the livery, so the set must have been released later in the F1 season. The car was campaigned by drivers Ralf Schumacher and Juan Pablo Montoya 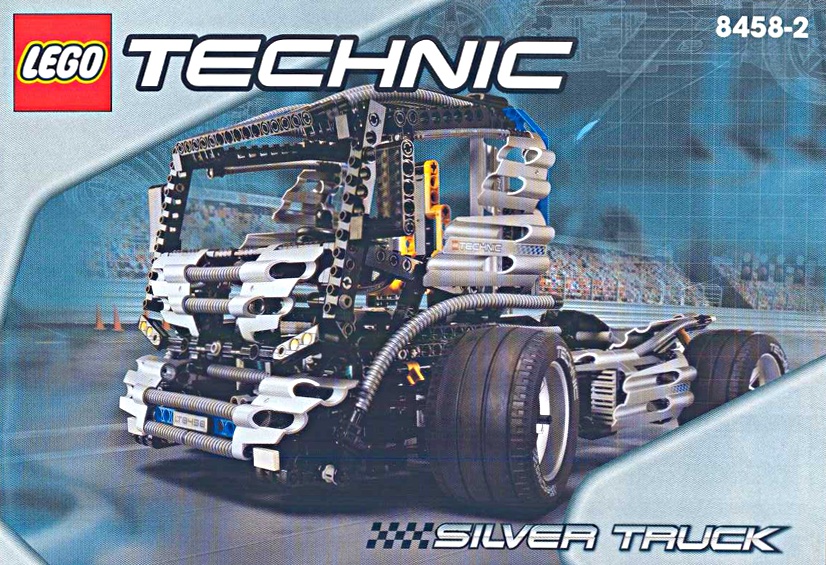 The B build of the original Silver Champion 8458 set the Williams F1 Team Racer is based on is a racing truck - it would be interesting to see the B build with the Williams set.

As this set ages it has some problems. The stickers for the set are especially problematic, shriveling up and peeling off with age. A number of replacement sticker sets are available on eBay, although quality can be dubious. A genuine sticker set for the model is over $90 and will obviously have all the same problems as the original if the model is on display. The model also uses LEGO's older "Light Grey" bricks that have a tendency to fade with age because of UV exposure. Some builders have discussed renewing the model using the new "Light Bluish Grey" bricks to solve the problem, but it will give the set a different look. 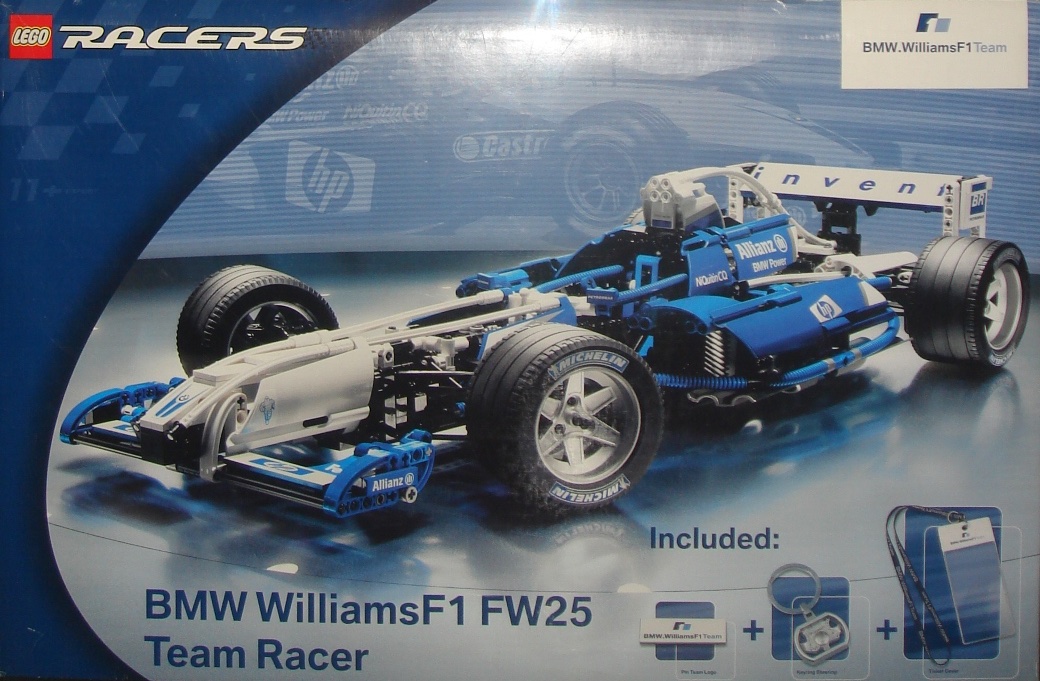 The 2003 BMW LEGO Williams F1 FW25 Team Racer set. Available only through BMW dealers and coming with a badge, keyring and lanyard/ticket holder specific to this set.

A very rare variant of this model featuring the 2003 season BMW Williams F1 FW25 was produced in the following year. This set was distributed almost exclusively through BMW dealers. A few of the sets were given away through competitions. The changes are relatively minor, with front wing plates changing from blue to white, the rear wing stickers changing to say just "Invent" rather than have the HP logo and the HP logos on the side of the model now being tilted. There's also minor changes to the sponsorship on the car, reflecting changes for the 2003 season. This edition of the set was packaged with a pin badge of the BMW Williams F1 Team Logo, a metal keyring featuring the steering wheel of the car and a ticket holder on a branded lanyard. 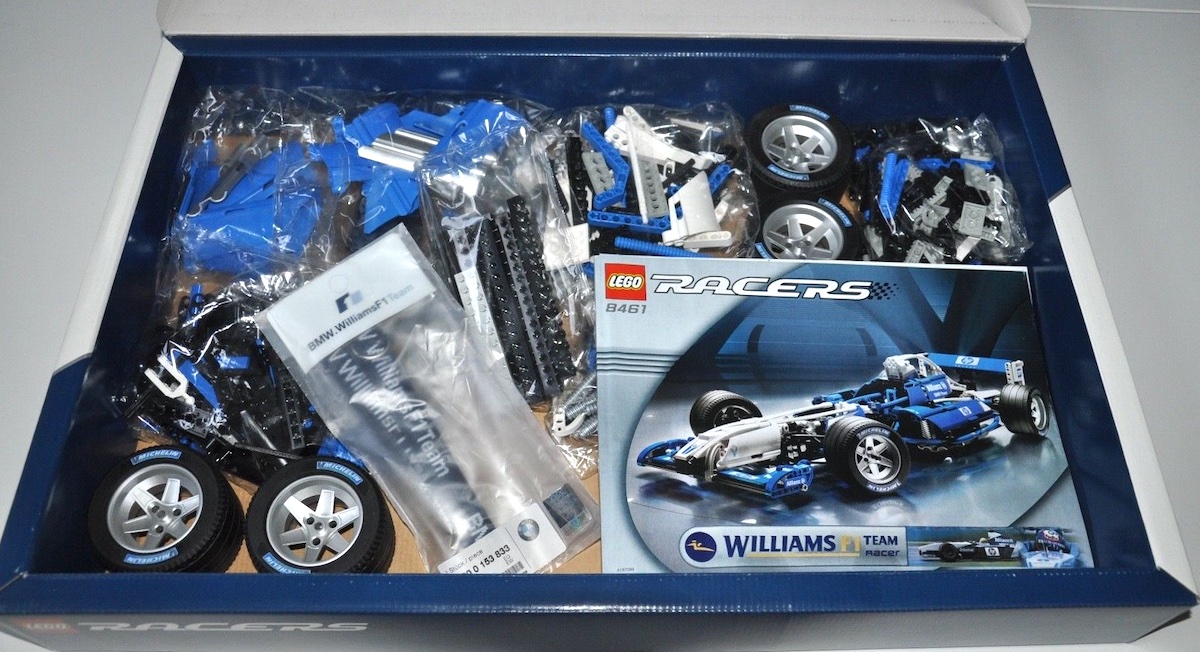 Inside the box of the LEGO Racers BMW WilliamsF1 FW25 Team Racer set, showing the lanyard ticket holder. The build instructions/manual is unchanged from the original 8461 Williams F1 Team Racer set (note the blue rear wing on the manual versus the white one on the box).

LEGO also used their Ferrari licence at this scale, with a Ferrari F1 Racer 1:8 set released in 2006 in a Technic style. Fans with both models actually report this model has better steering and suspension design, and is currently more affordable on the secondary market - CAD$300 and up against the CAD$900 of the Williams set. This Technic style set was also followed up by the Ferrari F1 1:9 Racers set in ordinary LEGO brick, a slightly odd looking set that doesn't really work as well as the large scale Technic F1 sets.

LEGO also released a large-scale Technic F1 set as the Technic "Grand Prix Racer" 42000 in 2013, with Power Functions and a red highlight colour to avoid any licensing issues. This set has less pieces overall at around 1100 instead of the 1400 of the earlier sets and a different look. 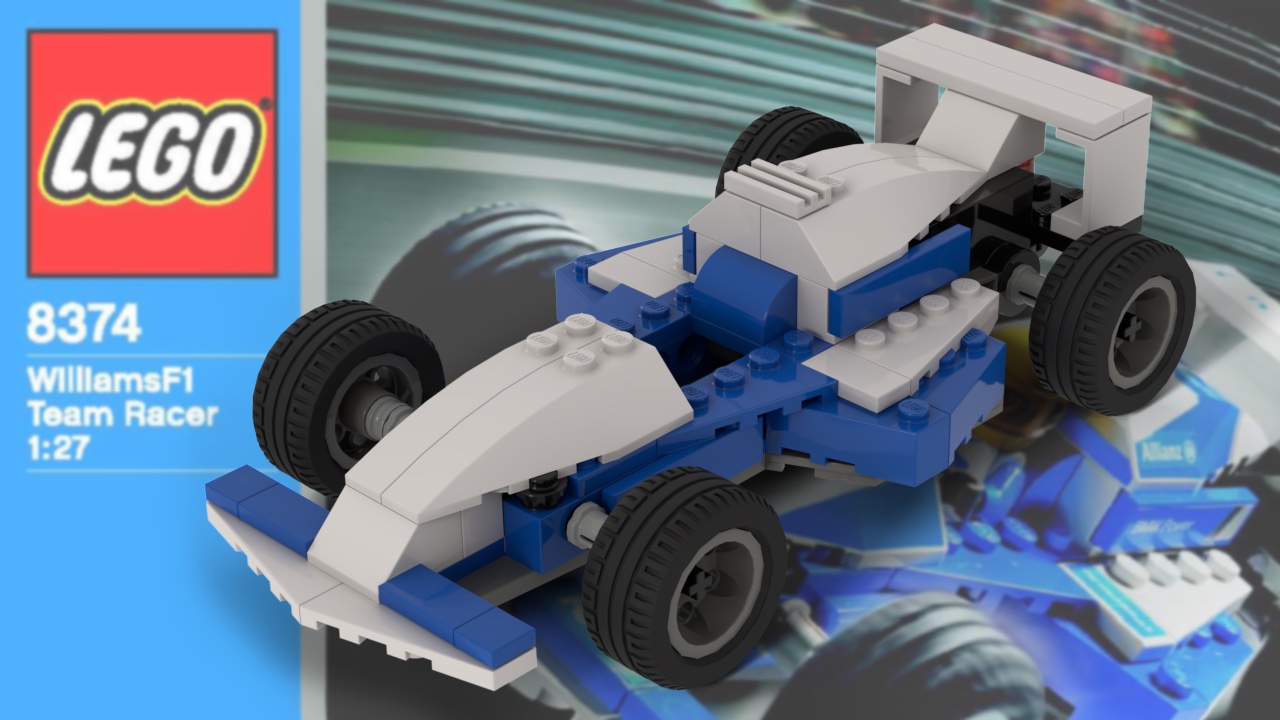 The Williams F1 Team Racer 1:27 8374 isn't a particularly interesting set, at only 98 pieces. Rendered here without any stickers. The shape isn't bad, but the wheels are a bit chunky.

An honourable mention goes to a very early set, released in 1992. The promotional "Renault Race Car", set 1750 was a promotional release to celebrate Nigel Mansell's victory in the 1992 F1 World Championship. This is also a Williams F1 set, although the box only carries Renault branding.

If all this F1 talk has you excited for more attainable sets, we've previously covered the recent Speed Champions sets, the Mercedes AMG Petronas Formula One Team set and the Scuderia Ferrari SF16-H individual car set, both released in 2017. If you're a F1 fan, but not a Mercedes or Ferrari fan, you're left wanting from the recent LEGO line-up. There's another Speed Champions F1 set - the 2015 launch release of the McLaren Mercedes Pit Stop, which we'll cover in due time.