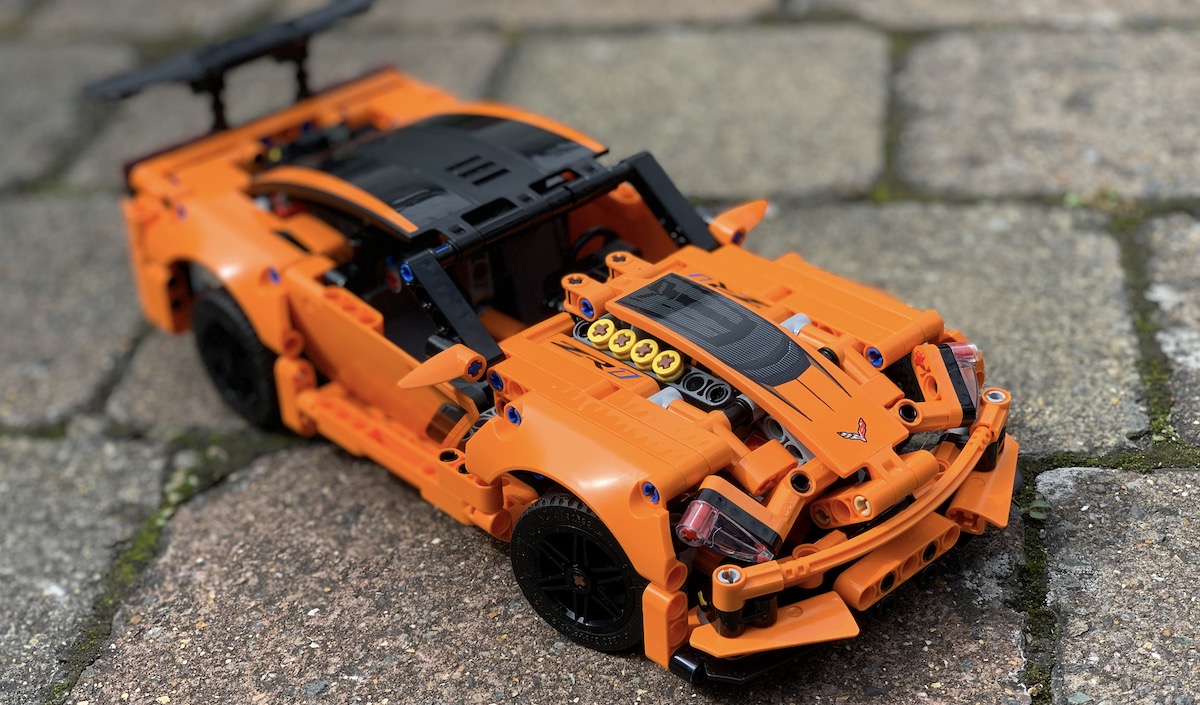 So this will be the first set we look at that's not actually in the Speed Champions range. This may sound like heresy but today instead we will be looking at the LEGO Technic Set 42093, this is the Chevrolet Corvette ZR1. Released in 2019, this set kind of came out of the blue, it wasn't expected or teased and didn't have a lot of hype around it. This may be because of the giant elephant in the room that I have managed to avoid speaking about for the whole of 3 sentences. This model was released and sold as a Corvette ZR1, it even has the ZR1 branding on the box. So you walk into the store, you see it and want it, you take the box to the checkout and pay roughly £39 / $45 (which is really quite reasonable in the terms of recent LEGO licenced car sets). You get home, turn the box around and you're confronted with a '2 Models in 1' statement, and for some reason you have the choice of building a Corvette... or an unbranded hot rod. 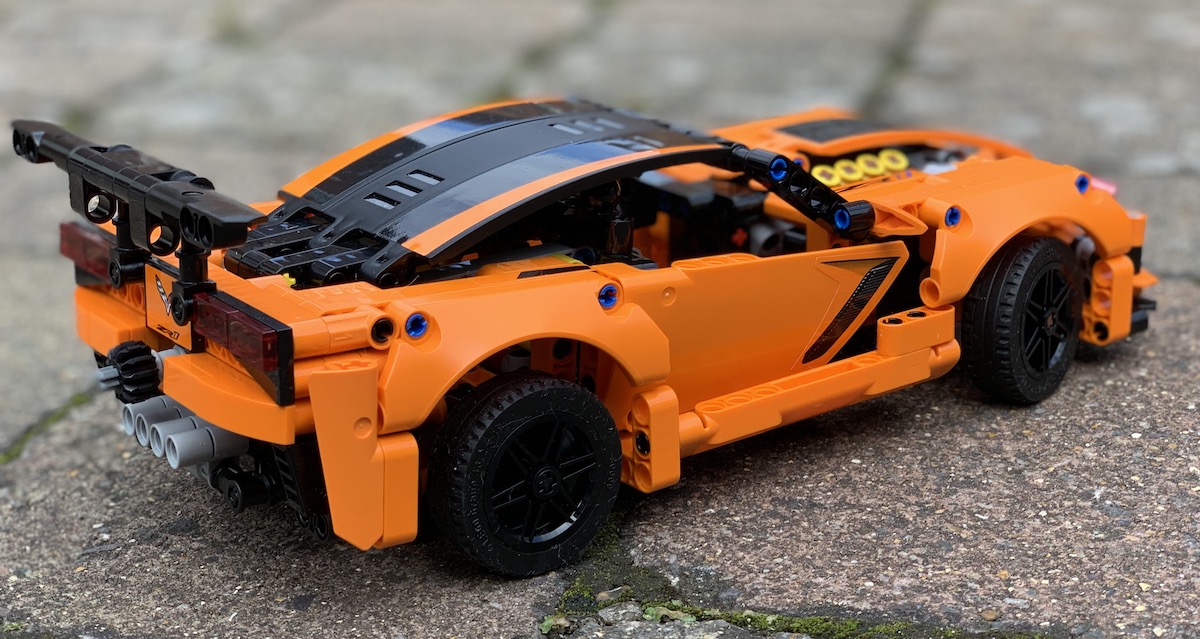 This set really captures the swooping, angular side profile of the Corvette well, although the orange is a bit odd for a car we've traditionally seen in yellow.

Yes, you read that right. This is a 2 in 1 set. In the box you get all of the parts and the manual that is solely based around the ZR1. All of the stickers are for the ZR1. It even has the Chevrolet flags, a carbon roof and the ZR1 branding along the bonnet, but it also comes with an advert that if you log onto LEGO's website, you can have the choice to build a rather random front engined hot rod with a weird V8 (with some pistons missing from an actual V12 engine it looks like) and a completely exposed engine bay, almost like a rat rod. To me this is a massive negative to the set, and I truly believe some design decisions made to make the set compatible as a 2 in 1 model have compromised the look of the Corvette and actually impacted on how enjoyable I found this model to purchase and build.

Let's shelve talking about the hot rod, I've spent too many of these reviews ranting about negative points of sets. I've only built the Corvette as you would expect, so let's deep dive into this new release and talk about it. This is a Technic set, and if you're not familiar with them it's a lot different to Speed Champions and I find, in some ways, a little less realistic. You'll rarely find standard LEGO pieces in a Technic set and it's mainly circular connecting parts and tubes. These have been kind of the flagship range for LEGO in the car department for a while, with the Bugatti Chiron and Porsche 911 GT3 RS being two of the most famous (and expensive) releases of the last few years, and brought millions of eyes worth of exposure onto the toy brand. 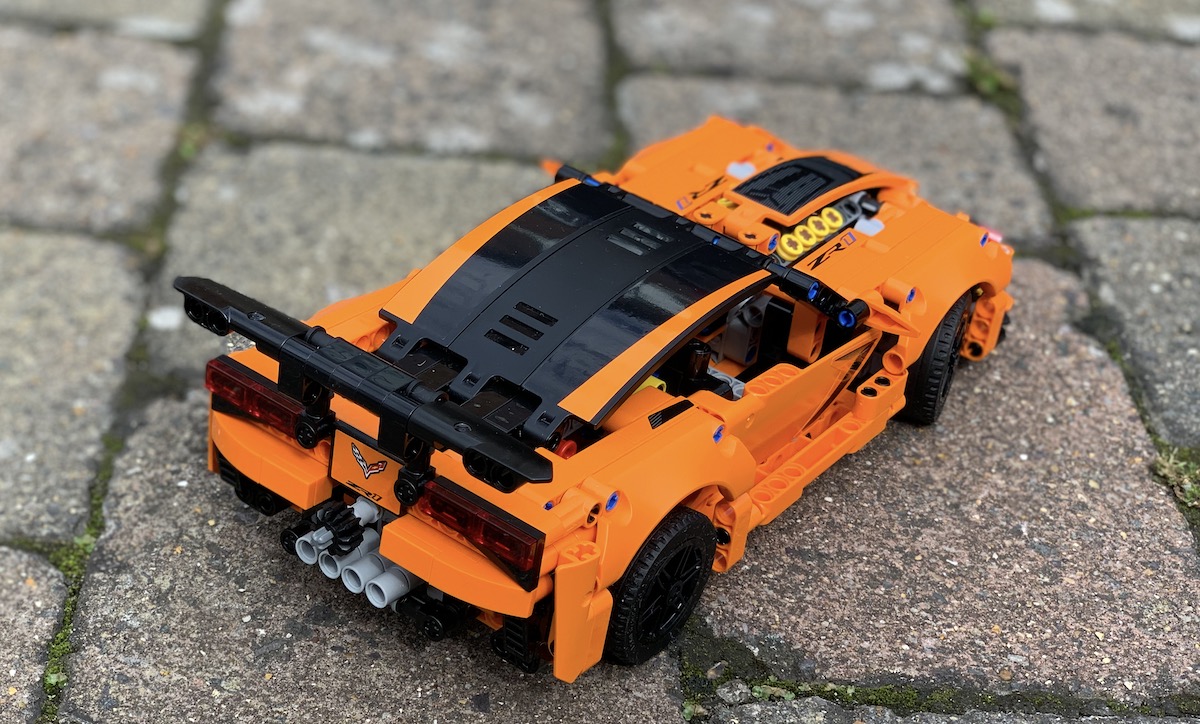 Black roof, black spoiler and even those quad exhaust tips from the real vehicle have been faithfully recreated. The knob for turning the rear wheels is perhaps not so realistic …

The ZR1 takes roughly 2 hours to build, with nigh on 200 instructions. It's a really bright orange, with black accessories and roof, along with black rims. The build is enjoyable, and one of the key points of a Technic set is that you actually build out a chassis, engine and steering rack out. My favourite part of the ZR1 build is that underneath the quad exhausts at the rear of the car, you'll find the ability to turn the front wheels. Another great feature is as you push the car along you'll find all of the pistons pumping up and down within the V8 engine. It's a very cool toy, although less of a visual presence than the Speed Champions sets which are better for a display. 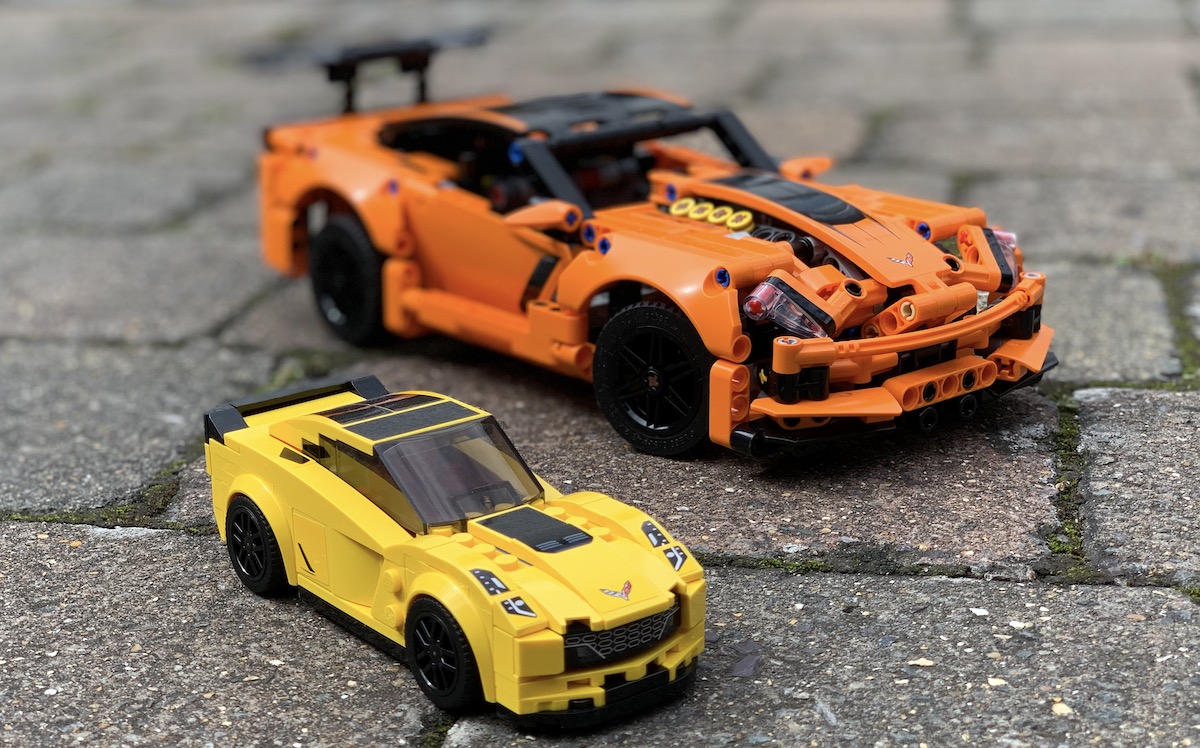 The Technic set together with Speed Champions Set 75870 Corvette Z06 - I really think the yellow is more punchy on a Corvette than orange. The familial relationship is clear though.

The downside of the set is probably the front for me, I find it to be a bit too skeletal and bare bones and not bear a relation to the real vehicle. The rest of the build actually replicates the body work quite well and I particularly like the squared off back with realistic Corvette style rear lights and the spoiler from the vehicle. One of the best positives is the price of this set, for a car that came out of nowhere and wasn't really pushed by Chevrolet, it's actually really good value, and definitely worth it if you haven't owned a Technic set before. I've put it next to the 2015 Corvette Z06 that was in one of the first Speed Champions release in some of the images so you can get a good idea of how it compares size wise as well as in terms of a better look at it. Perhaps a reader can send us some completed version of the hot rod build? I'm not that excited about taking the Corvette to build that odd looking thing.

Two different ways to model the rear end of a Corvette. It's arguable, but I think Speed Champions with the luxury of stickers over real LEGO components has the upper hand.