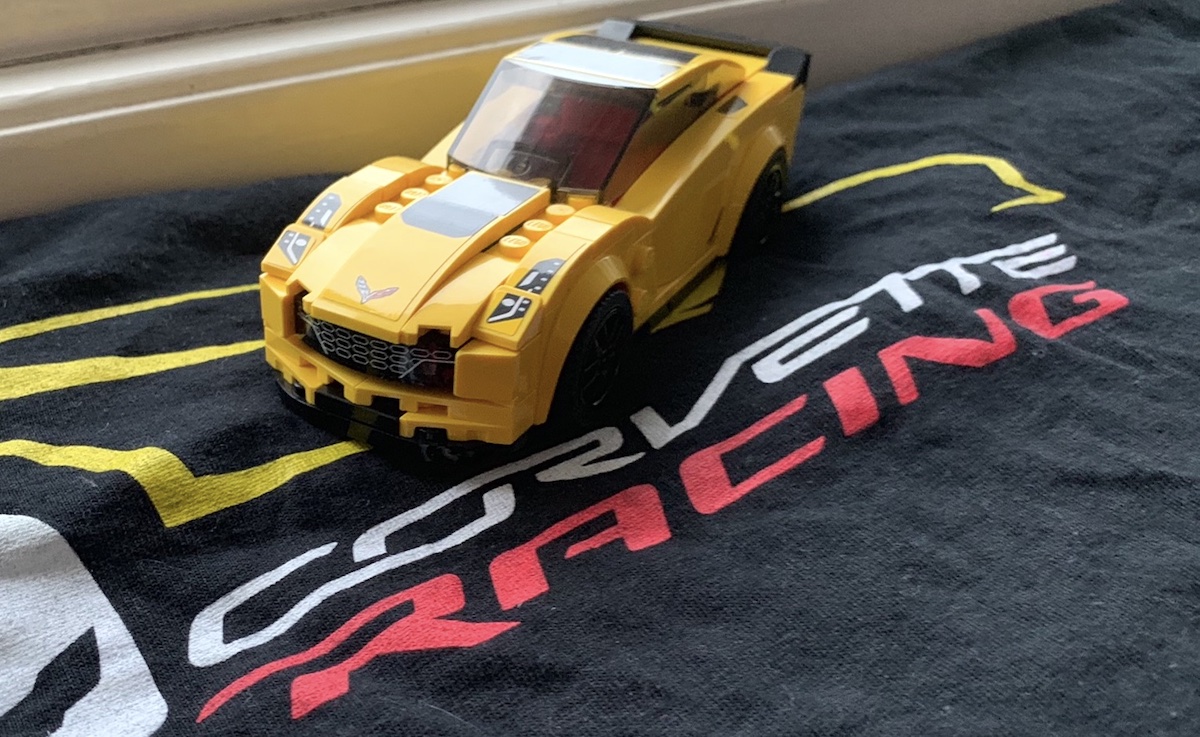 So this is the first set of Speed Champions we are reviewing that I personally had to buy in the secondary market (on eBay in this case). I'd say I've always been a fan of the sets and generally tried to pick most up, but some just haven't peaked my interest or I've been busy and haven't got around to it. The Chevrolet Corvette Z06 was one of these, and although on the second hand market it isn't as a valuable as the Ford F150 or some of the more expensive Ferrari sets, it will still set you back around £30/$50 on brick marketplace sites. So let's stop talking about the value and talk about the set, because that's what we are here for. Busy? Auction ending in 30 seconds and you just need an opinion right now? It's a buy from me, you'll enjoy the set and it's a really good representation of the Corvette in LEGO form.

This set was released back in 2015 and was one of the first sets. So the way it looks is actually a bit of surprise, when you build it it's a really good design, it accentuates the long nose of the Z06 Corvette and is not too blocky at all. This is in massive contrast to the 'holy trinity' first releases - the Porsche 918 is awful and the LaFerrari and McLaren P1 aren't really faithful recreations. The earlier sets tend that they either build upward too far or have A and B pillars that are too thick, so it definitely seems as if there was some revisions to the general style pre-Corvette release which really set it apart from the first designs in the Speed Champions series. 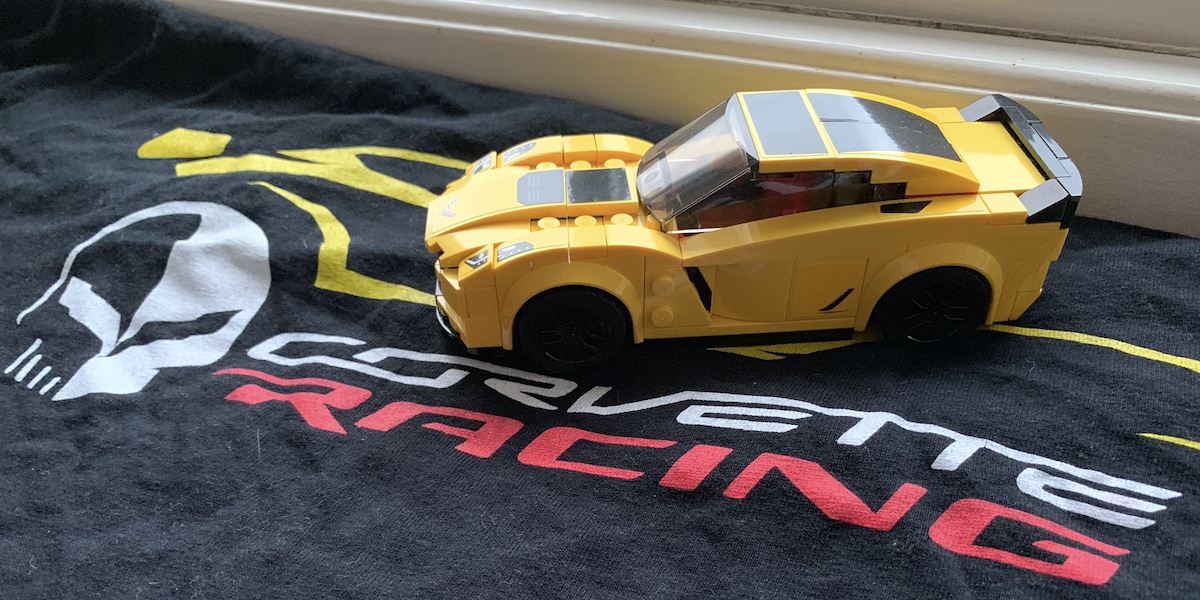 Side-on the profile looks great, reminiscent of the real Corvette and a step on from the early Speed Champions models

Looking at the box for the set, I'm not 100% on what the theme is here. You've got the usual driver in his Chevrolet branded race suit, but the accessory that comes with the set seems to be a television camera. I'd totally get this if the set was a Steve McQueen style Bullitt Mustang or Gone in 60 Seconds hero car, but I'm not sure what heritage in filming or television that the Z06 has. It'd also be more obvious if the car was in race livery (The Corvette has been hugely successful in IMSA and the Le Mans series of racing and is one of the most iconic GT series of it's era). 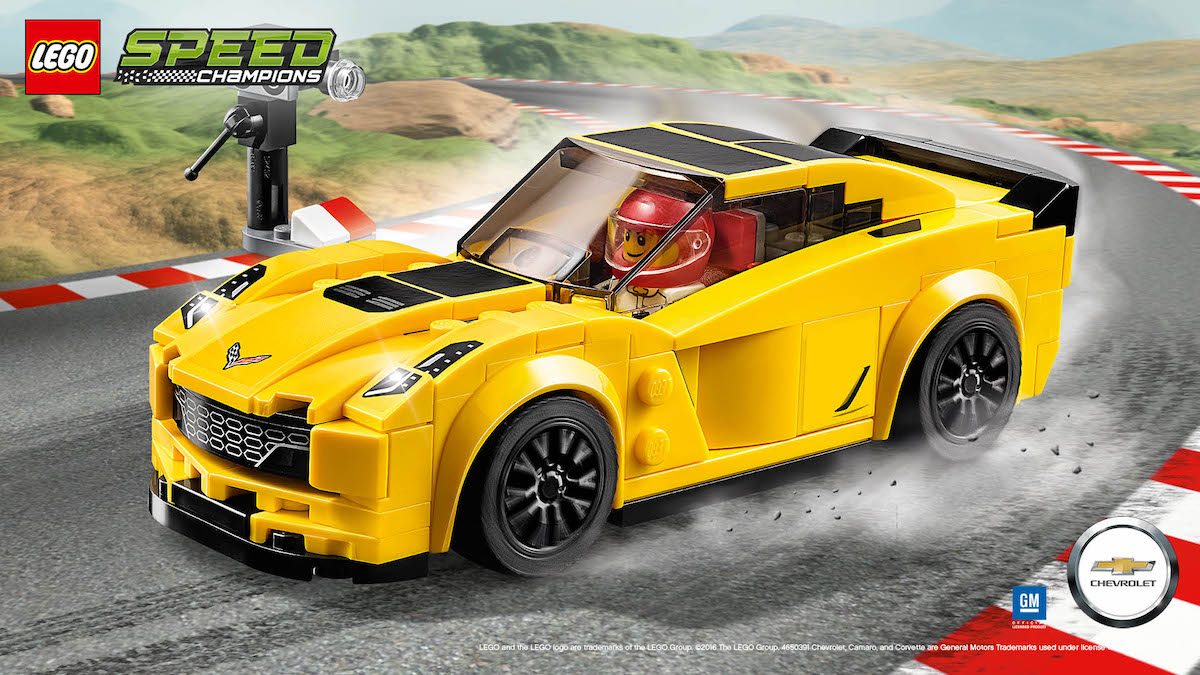 The wallpaper/poster image for this set from LEGO. The track background looks a lot like Willow Springs Raceway

Promotional materials for the set make a bit more sense - LEGO presented a wallpaper and poster set for this vehicle which seem to show it off at Willow Springs Raceway, a very appropriate home for such an iconic US vehicle. Could it be that the included camera is to shoot a TV show? That's my best guess. Given this was a very early set from LEGO, I think they were still figuring out what role the accessories would play in the Speed Champions line - the accessories here will more than usually be left in the box and very few people will choose to put the camera out on display with the set. 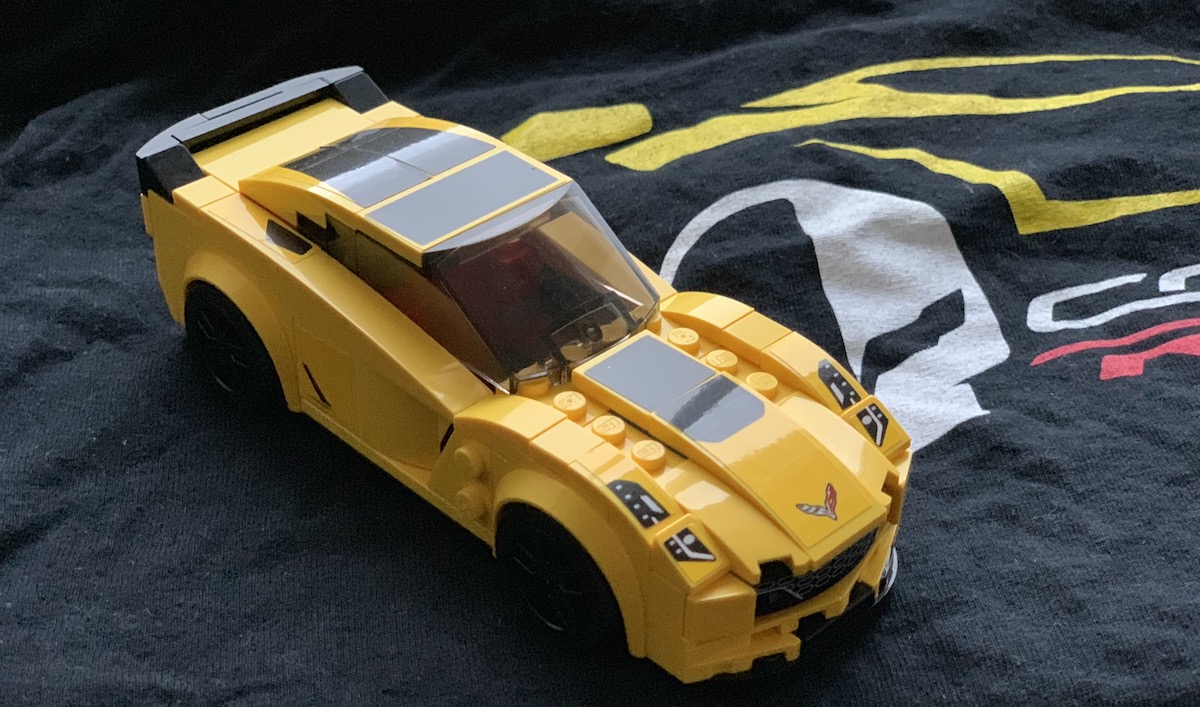 The Corvette was the first set to come out in yellow, and a number of sets have followed (including the SRT Dodge Demon from the Dodge Drag Racing set many years later). This is one of the best features, the yellow and black colour scheme absolutely pops and makes it an eye catching edition. Another iconic set of colours, the blue and white striped Grand Sport theme would have been awesome but the yellow is instantly associated with Corvette Racing - LEGO have done well here, matching the GT colour scheme of the car and it looks great. The secondary colour is black and they are replicating the carbon roof and black bonnet scoop. I'm a fan of the scoop spoiler on the back, made out of small black slanting pieces, I think it works a lot better than a hung spoiler.

The stickers on the set work well, they are quite understated and set the car off well, most of these are either Corvette or Chevrolet Logos or adding to the black parts of the car. LEGO have made the choice to make the quad exhausts on the car a sticker rather than a manual part and I actually think this really works, the pipes are so close together on the real car you'd really struggle to use parts small enough to get a realistic look.

Overall, taking away the fact that the accessories aren't the best, this a great car build. I find it matches the dimensions of the original car well and it's one of the few Speed Champions sets with the long GT-car style nose which looks aggressive and sporty. The set did a lot for the popularity of the series in America and tread the way for the Dodge and Camaro sets that were to follow.

Unfortunately due to how early this set was released, you won't be able to find this in any stores unless it's second hand. This set has been out of production for almost 3 years and you're going to be paying a decent premium second hand. If you were to find a boxed and sealed example of the set, you'll likely be looking over £100/$150, but at that point you are well into collectors territory. Better to go with an unboxed, open set and enjoy having the model out on display and not worrying about the potential cost of opening the set.

It should be noted though, the LEGO Technic Chevrolet Corvette ZR1 (42093) is a current model and available through regular channels (as of the time of publishing, June 2019). Rather than spend the premium on a second hand version of this set, unless you're a Speed Champions die-hard fan (like us, unfortunately), it might be better to buy the Technic set if you're a Corvette fan. Unusually for a Technic scale set, it's relatively reasonably priced - around £30 / US $49.99.

Overall, the Z06 is a welcome addition to anyone's set collection. With 2020 bringing a huge new development in the Corvette line, with a mid-engined car for the first time it's not out of the question that we'll see another Corvette from LEGO sometime soon (the new car launches in July 2019). If this was a 2019 release I can imagine we'd see a more premium set with more interchangeable parts, or even a GT livery included. Given LEGO's latest release with Dodge with a two car set, a two car Corvette set with a 1969 Corvette Stingray 427 (as driven by NASA astronauts!) and the new 2020 car would be a great set to own and help out those fans who don't want to buy on the secondary market. 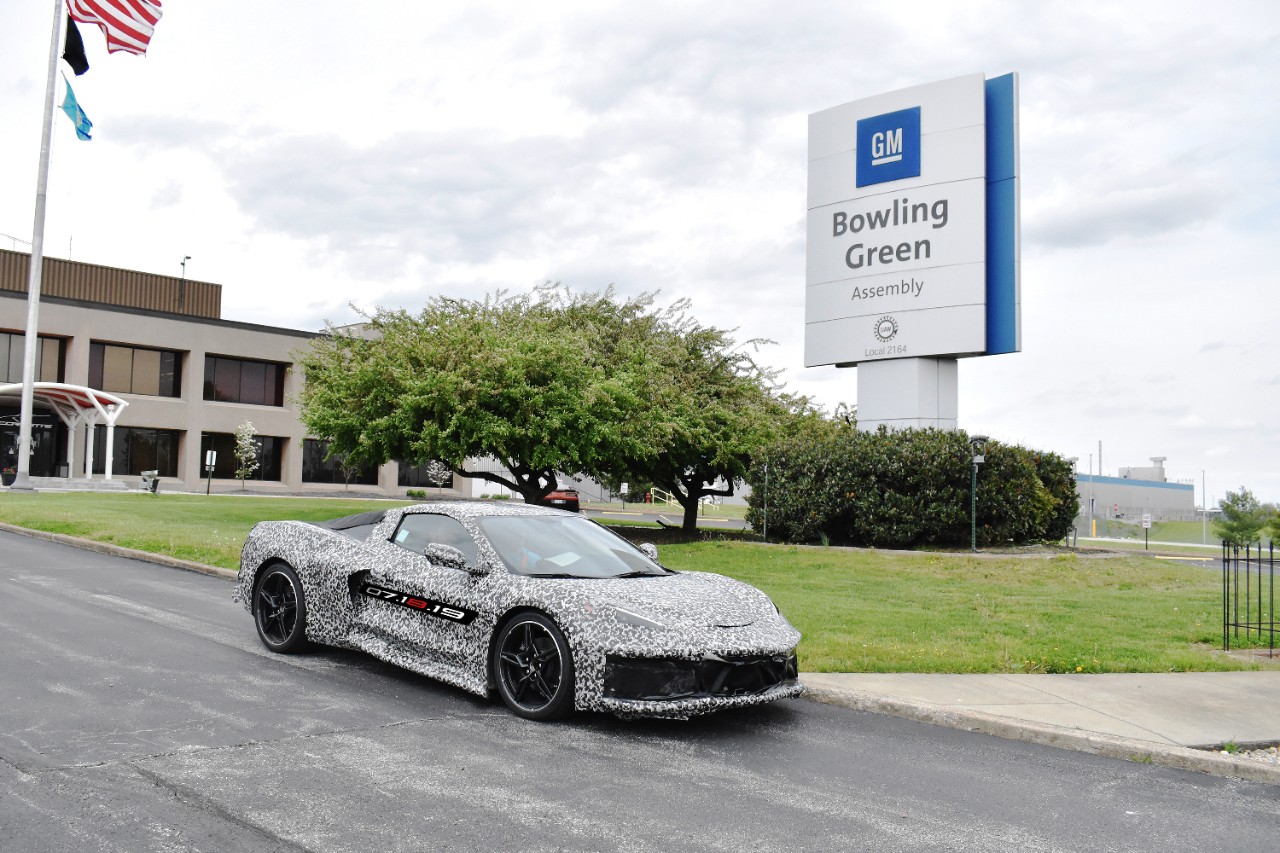 The new 2020 (supposedly mid-engined) Corvette outside the famous Bowling Green plant where Corvettes are produced. This set would make a great US rival to the Porsche, McLaren's and Ferraris we usually get!